Seniors Jessica Stansfield and Hannah Towne, who played together on Court 2 this season, were instrumental in getting the program to its highest ranking, said head coach Kristen Rohr. (Photo courtesy of Grand Canyon University Athletics) 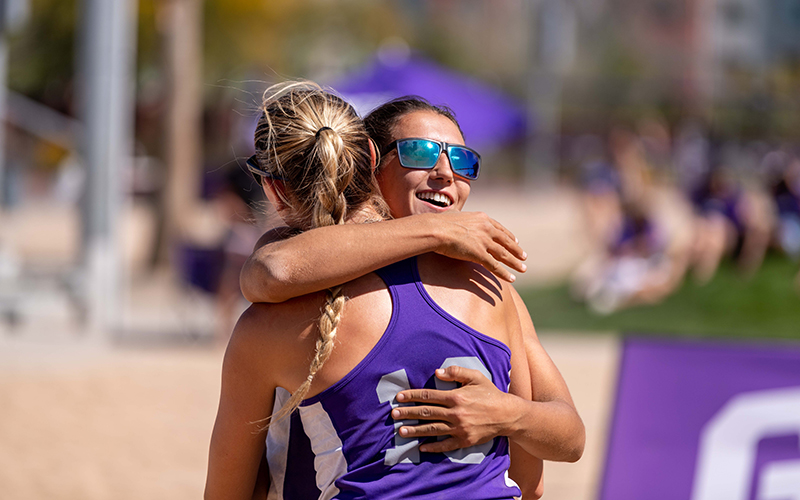 Stansfield said one of her favorite memories of her GCU career is when the Lopes recently beat No. 17 South Carolina and No. 4 USC on March 1 — her 22nd birthday. (Photo courtesy of Grand Canyon University Athletics)

PHOENIX – Grand Canyon University’s beach volleyball program was on the doorstep of making school history, with all the pieces falling into place for the Lopes to contend for a national title in May.

Then, like so much in society during 2020, GCU’s dream season was derailed by something with far more historic significance.

With wins over three nationally ranked opponents in the first two weeks of their season, the Antelopes rose to No, 7 in the nation, according to NCAA rankings.

And Grand Canyon seemed to be built for Gulf Shores, Alabama, where the country’s top eight teams were supposed to duke it out for the NCAA Beach Volleyball Championship later in the spring.

Then, the cruel and relentless acceleration of the coronavirus brought sports around the globe to a screeching halt.

“I think the first couple days, it didn’t feel real,” said Grand Canyon coach Kristen Rohr. “It felt like I was going to wake up and it was just this big dream.”

Rohr played the role of mediator in the hours leading up to the NCAA’s March 12 decision to suspend winter and spring sports, which effectively ended the season on the spot.

The Lopes were readying to host their Desert Duel Tournament, a four-team field that included GCU, Texas A&M Kingsville, Loyola Marymount and Ottawa University. Rohr bridged the gap to the schools, providing hourly updates as the programs weighed whether to continue travel.

Dominoes were falling all over the sports world, as rapidly as the virus spread, but beach volleyball had yet to be hit.

About 10 minutes after relaying that message, Rohr learned the season had been suspended.

Gone was a nearly flawless 10-2 start along with the chance to pad an already impressive Grand Canyon resume with potential home wins versus No. 8 Loyola Marymount and Texas A&M Kingsville.

Their entire season ended, spiked without a chance to return.

“Just thinking about what we could have accomplished,” senior Hannah Towne said via email, “it gives me goosebumps.”

The visiting teams scheduled to play in the Desert Duel were informed first and canceled flights to Phoenix immediately. Then, Rohr faced the unpleasant task of telling her team.

It was an off-day, and instead of being together with a chance to console one another, the 16 players on the roster got the news in the last way Rohr wanted them to get it – in a text message.

Senior Jessica Stansfield walked out of an exam on the morning of March 12 and saw the messages flood in. Tournaments were being canceled and seasons suspended one by one. It felt inevitable that hers was next.

“I saw the NCAA announcement that all championships had been canceled. Although our season wasn’t officially canceled, we all kind of knew it was the end. I felt lost,” she wrote in an email.

Towne was in the training room when an athletic trainer informed her.

“It’s like having a bad dream that you can’t wake up from,” she said. “I did not know the weekend before was going to be my last time in the sand competing next to my teammates. That alone made me sick to my stomach.”

A chunk of the school’s beach volleyball rise falls on the shoulders of Rohr, now in her fifth year as head coach. The Lopes have tallied double-digit winning seasons in each of those five years, including a program-best 20 victories last spring.

Before her GCU tenure, Rohr had a prolific four-year playing career at the University of Kentucky. It parlayed into a lengthy professional beach career. Since her arrival, the school has seen its beach program turn into national contenders, while also unveiling a state-of-the-art facility featuring three stadium courts that can hold 1,000.

And she believed that this 2020 team possessed the most balance and potential of any team she has had at Grand Canyon. Her roster teemed with senior leadership and talented underclassmen. Those are ingredients, Rohr has learned, that lead to a lengthy postseason run.

Grand Canyon got off to a roaring start to open its spring campaign. It stole a 4-1 win on the road at No. 11 Cal in its first opener. A week later, in the Hilton Head Island Invitational, the Lopes won three of four games. They beat No. 4 USC and No. 17 South Carolina on the same day.

They were statement wins, the kind Rohr said has eluded her program in years prior. Grand Canyon shot up the national rankings and landed at No. 7, the highest in program history.

And the Antelopes believed that their best volleyball still lay ahead of them. The victories over ranked opponents on the road and the ability to steal games against teams the Lopes had often struggled to hang with appeared to be the prologue to a magical spring.

Now, the Antelopes and Rohr will always be left wondering, forced to contemplate all of the ‘what-ifs?’ That is what they find most upsetting.

“Everything happened so quickly,” Stansfield said, lamenting a lost season. “So right now it feels like I’m picking up the pieces and trying to reminisce while all the memories of this season are still fresh.”