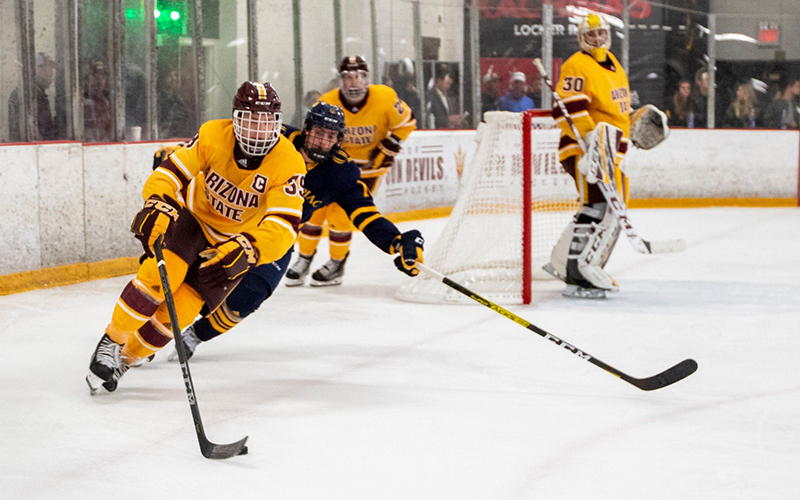 ASU’s Brinson Pasichnuk became the second Arizona State hockey player to agree to terms on an NHL contract after reaching an agreement with the San Jose Sharks. (Photo by Travis Whittaker/Cronkite News)

TEMPE – Brinson Pasichnuk recalls when he first realized he wanted to play in the National Hockey League.

“I think (Sidney) Crosby said a quote. I heard it when I was young. It said, ‘Imagine waking up everyday and your job isn’t work,'” the ASU senior defenseman said. “It’s not the exact quote, but imagine going to play hockey every day for your career. How could you not fall in love with that?”

Pasichnuk became the second Arizona State hockey player to agree to terms on an NHL contract after reaching an agreement on Monday with the San Jose Sharks. He will be the first ASU player to sign an NHL deal as a free agent.

He could have joined the team much earlier. San Jose offered him a deal after his junior campaign where he finished with 29 points. But he wanted to finish his fourth year at ASU.
“We’ve built a really good relationship there,” Pasichnuk said. “They gave me their word that they weren’t going anywhere on me if I was going back for my senior year. They truly showed that. They treated me with nothing but the utmost respect.”

Pasichnuk and ASU’s defensemen finished first nationally in points with 113.

Pasichnuk was among the first recruiting class to play in ASU’s first full NCAA season in 2016. In that class was Joey Daccord, who became the first ASU player to sign an NHL contract when he agreed to terms with the Ottawa Senators last season.

ASU coach Greg Powers was first introduced to Pasichnuk after driving up to the Toronto area with assistant coach Alex Hicks after a weekend series at Rensselaer Poly Institute in Troy, New York. They intended on watching future forward Tyler Busch, but two other players also stood out to Powers: Pasichnuk and current Colorado Avalanche defenseman Cale Makar.

There was one catch: Pasichnuk was committed to Vermont.

Once Pasichnuk became available a few months later, Powers jumped at the opportunity for both him and his brother, Steenn.

The ASU staff used the fact that its program was just getting started to their advantage.

“You get to come to a brand new program, a blank canvas and really leave your mark on it,” Powers told them.

He also told them about how instead of wanting their picture hung up in the hallway of NHL players at an established school, they could have that hallway named after them at ASU.

His efforts worked and both brothers joined the program for its first full NCAA season.

Pasichnuk, along with his brother, Busch, and forward Brett Gruber, all knew they would spend the next four years building a culture. The schedule wasn’t on their side in the beginning, with games against top-10 programs. They understood what they signed up for.

“Looking back to when I got here freshman year to where it is now, I can look myself in the mirror and truly be happy with where me and my class feel like we’re leaving the program,” Pasichnuk said. “I think we helped build a culture that we really wanted here.”

In Pasichnuk’s first NCAA games against No. 8 Notre Dame, Powers called him “arguably the best player on the ice” and was the silver lining in a weekend of lopsided scores.

“We knew what we were getting really from day one in Brinson, and he just continued to get better and continued to make an impact both on and off the ice,” he said. “We are where we are today largely in part because of him.”

Halfway through Pasichnuk’s sophomore season was when Powers noticed a shift in his off-ice demeanor.

Powers said Pasichnuk went through “a little bit of a culture shock” his first two years after coming from Bonnyville, Alberta, a town of 6,422 residents. Pasichnuk’s change in leadership led to him being named the second captain in program history during his junior year.
“He found his faith. He just matured immensely in every way, and he never looked back,” Powers said.

But it was the following year when he found his landing spot in San Jose.

Both Pasichnuk brothers were invited to the Sharks’ camp and enjoyed their time there. Pasichnuk credits the character of the staff as a main reason for agreeing to terms with the team.

“They are truly, unbelievable human beings,” he said. “They really got to know me away from the rink, not just at the rink. That was huge to show that they truly do care about their players and they know it’s your career, but they also want to help you develop as a person, just like Coach Powers’ philosophy.”

He also noted the unique amenity of having the American Hockey League affiliate, San Jose Barracuda, in proximity to the Sharks. Pasichnuk and his wife, Halle, a former ASU volleyball player, loved the idea of staying in the same city.

“When me, my wife, and my family made the decision to go to San Jose, it was one of the most exciting days of our lives,” Pasichnuk said. “Now it’s just getting my name on that paper in the very near future.”