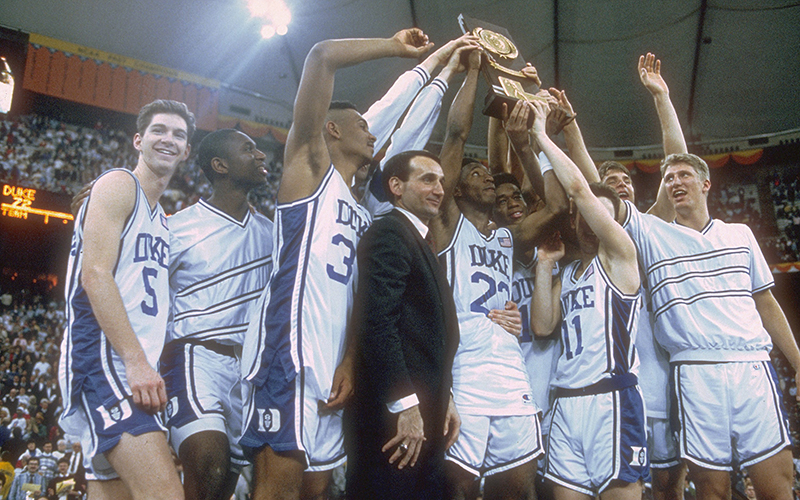 Duke caught the nation’s attention by beating UNLV in a national semifinal game in 1991 and then following up with a title victory over Kansas. (Rich Clarkson/NCAA Photos via Getty Images)

PHOENIX – The kid came out of Jersey City from a legendary basketball family, already something of a star. With Bobby Hurley running the point, his high school team went 115-5, but playing for Duke in the early 1990s was a whole other world.

Teaming up with Grant Hill, another legend, for a jaw dropping alley-oop that set the tone for the Blue Devils’ very first NCAA men’s basketball title, well, that was a completely different universe.

These days, Hurley is the buttoned-up coach of the Sun Devils, guiding ASU through slow but steady improvement over the last five seasons. But 29 years ago today, in front of a sold-out Hoosier Dome, Hurley’s grit and tenacity helped finalize a season that still radiates within Duke’s storied history.

The Blue Devils’ 72-65 win over the Kansas Jayhawks gave Duke its first of five national championships, and turned coach Mike Krzyzewski into a household name (albeit one with a nickname – Coach K – that flows a bit easier).

But it was the Blue Devils’ shocking upset in the semifinals, a 79-77 squeaker over undefeated and heavily favored UNLV, that really made a nation sit up and gasp. Just one year earlier, when Hurley was a sophomore, Jerry Tarkanian’s Runnin’ Rebels had thrashed Duke by 30 points, setting the record for the largest margin of victory in a championship game. After winning the astonishing Final Four rematch in ‘91, that Duke team – Hurley, Christian Laettner, the two Hills, Grant and Thomas – became icons for a generation of hoop fans.

Hurley set the tone of the title game, running the court and finishing with 11 points, nine assists and two steals.

His alley-oop to Grant Hill less than three minutes into the game looked like it might sail over Hill’s head. But the freshman grabbed the ball with his right hand and stuffed it through the basket.

It set the tone for the game.

In a 2016 interview with Fox Sports on “The Best of Coach K,” he described how Krzyzewski opened up to him and fed him with the fuel to keep the hot streak going.

“We’d just beaten UNLV in the 1991 Final Four. … Coach K had done a masterful job of convincing us we could win that game, especially after the way we lost the year before (by 30 points to UNLV in the title game),” Hurley said.

“His intensity, his passion. … After the game, he let his guard down. He asked me, ‘Can you believe we just did what we did?’ And I said, ‘Hey wait – you said we should win that game!’ In the week leading into that game, he told us, ‘No one thinks we are going to do it, but we’re going to beat this team. We’re a different team than we were last year.’ And he said it with the conviction necessary to believe it. He said, ‘I’m going to go to the media and say how great they are, but you guys don’t listen to what I say.’”

“And I’ve never been so determined in my life.”

Hurley went on to win back-to-back championships with the Blue Devils and remains the NCAA all-time assists leader with 1076 over 140 games (7.68 per game average). Duke retired his jersey number, 11, in 1993. 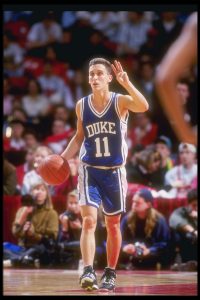 Bobby Hurley was a key figure in Duke securing its first national title in 1991. (Photo by Doug Pensinger /Allsport via Getty)

At ASU, Hurley is building another legacy with the Sun Devils. Since Hurley took over the reins in 2015, the team has matched the highest ranking in school history and defeated two No. 1 seeds (Kansas and Xavier) in the span of a few weeks.

Before the COVID-19 pandemic forced the cancellation of March Madness, the Sun Devils were on track to make their third straight NCAA Tournament appearance, which would have been a program first in about 60 years.

Hurley recently suffered a recruiting setback when 6-foot-10 center Cliff Omoruyi of Roselle Catholic (N.J.), not far from Hurley’s childhood playgrounds, flipped from ASU to Rutgers. In addition, standout junior point guard Remy Martin, the Sun Devils’ leading scorer, officially declared he will be entering the NBA draft, creating another challenge for Hurley. If he’s stuck for inspiration during this spring without sports, the kid from Jersey who found a home in Arizona can always turn to a certain championship game from 29 years ago. 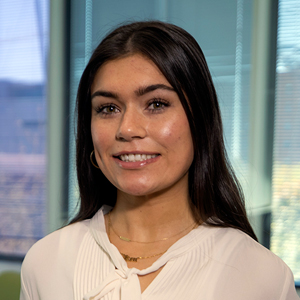