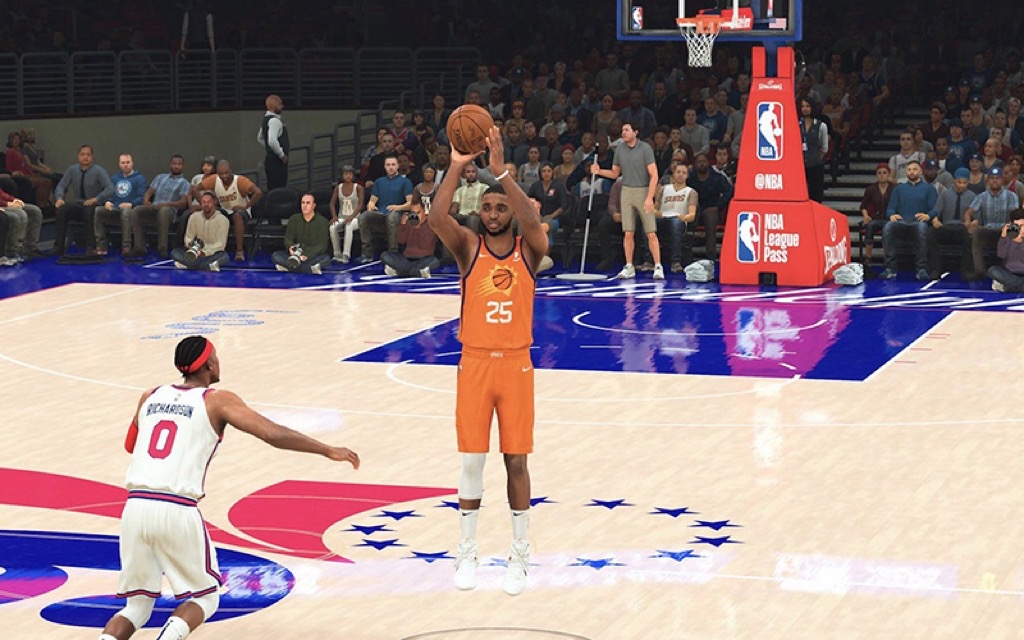 Because an outbreak of COVID-19 has left live sports off the air, the Suns are using NBA 2K20 to bring new games to fans and recently did a live broadcast on the radio. (Photo courtesy Phoenix Suns)

Growing up as a video game fan and future commentator, Bloom would often do play-by-play of the games he was playing. He has even used NBA 2K20, the video game, to prepare for Suns games this year by going over the rosters of opposing teams.

“It all comes full circle,” Bloom said. “I never thought I’d be broadcasting (a video game) on the radio.”

On Friday night, he did.

Bloom and his broadcast partner, Tim Kempton, were the first professional duo to call a game of NBA 2K20 live on the radio.

The matchup on display was the Suns game against the Philadelphia 76ers. Suns forward Mikal Bridges manned the controller for Phoenix and Sixers rookie Matisse Thybulle controlled for Philadelphia.

The Suns have been using the game streaming service Twitch to play out their regular-season schedule because games can’t take place on the hardwood due to the outbreak of COVID-19.

Bloom was excited about the idea of extending that format to the radio.

“It’s exciting to have a gig,” Bloom said. “Main thing I’ll focus on is having an entertaining conversation between me and Tim with the focal point being the battle between Mikal Bridges and Matisse Thybulle. This is the world we’re living in.”

How it worked, from Bloom’s understanding, is that SAK Gaming, based in Tempe, patched Bloom and Kempton into the gameplay. The broadcasters were not involved in the live commentary taking place between Bridges and Thybulle on Twitch; that was separate.

They were patched into the radio station, 98.7 FM Arizona Sports, on separate lines from their homes (Bloom was in his home office) and called the game. Then they interviewed Bridges on the radio after the game had ended to ask him about the experience.

“Lots of people say, ‘This isn’t my first rodeo.’ Well this is my first rodeo, so we’ll be pretty up front about that from the jump,” Bloom said, joking.

Due to the pace of NBA 2K20, the call was hectic. Bloom described it as frenetic, but it appears that the two broadcasters had a ball.

At one point, Kempton made a Cotton Fitzsimmons reference and Bloom wondered how the legendary Suns coach would feel about what they were doing.

“All things considered, I thought it went well,” Bloom said in an email afterward. “There were a lot of moving parts and most were successfully executed. It went so fast! We would probably change a few things if/when we do it again. You were right about us having fun, though.”