A crowd of 13,203 watches a spring training baseball game between the Los Angeles Dodgers and the Chicago White Sox at Camelback Ranch. A coronavirus outbreak in New Orleans has raised questions about the impact of sporting events on the spread of COVID-19. (Photo by Carlos Herrera/Icon Sportswire) 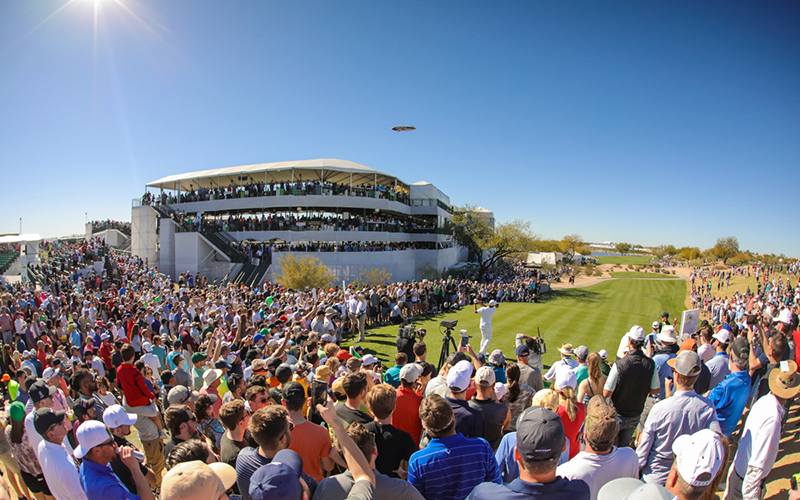 The Waste Management Phoenix Open typically attracts more than 500,000 fans over five days. The 2020 tournament was over before the first U.S. case was reported in Washington state. (Photo by Brady Klain/Cronkite News)

PHOENIX – Could the high rate of COVID-19 infections in New Orleans be a harbinger for the Phoenix area? That’s what some are wondering after a recent spike in Louisiana is being attributed, in part, to the influx of visitors during Mardi Gras celebrations, which occurred about the same time as MLB spring training and the Waste Management Phoenix Open.

Mardi Gras in New Orleans typically attracts more than 1 million people, crammed together on Bourbon Street and elsewhere in the French Quarter. Mardi Gras was Feb. 25, but carnival celebrations began in early January.

“What happened in New Orleans is this massive gathering with about 1.4 million people,” said Swapna Reddy, a clinical assistant professor at Arizona State’s College of Health Solutions.
“These are old streets (by American standards), tightly packed. The weather facilitates being outside, there’s restaurants, bars and parties.

“It’s almost the perfect storm for something as contagious as COVID-19 to spread.”

Although the Thunderbirds – which hosts the Phoenix Open at TPC Scottsdale – no longer releases attendance figures, the Phoenix Open typically averages more than 500,000 fans, with the total crowd peaking at 719,179 in 2018. This year’s tournament events ran from Jan. 27 to Feb. 2.

Spring training draws crowds, too, but in smaller doses. In 2019, the Cactus League brought in an average of 7,900 fans for the 15 teams playing across the Valley, totaling 1.74 million overall. Major League Baseball did not release attendance this year because it canceled the season on March 12, but early reports suggested numbers were down due to inclimate weather. For example, Surprise Stadium drew just fewer than 4,400 fans for its first six home games.

On March 18, the Cincinnati Reds announced that an Arizona employee had tested positive for COVID-19. The team trains in Goodyear. 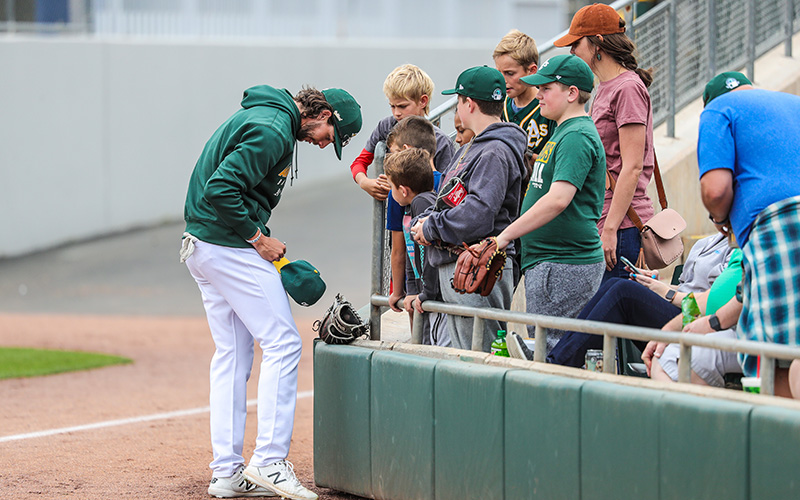 Fans regularly interact with players during spring training, including at this game at Hohokam Stadium. (Photo by Brady Klain/Cronkite News)

Could events in New Orleans mean Phoenix will see similar numbers in the near future?

“It’s hard to say,” Reddy said. “They certainly sound like the type of events that could accelerate the virus like Mardi Gras. Neither of them are quite as intensely packed in the same way as Mardi Gras.”

When asked for comment, the Louisiana Department of Health issued this statement to Cronkite News:

“Mardi Gras probably was a factor but that’s not the point. Rather than dwell on the fact that some of America’s greatest traditions proved to be powerful vectors for this disease, it’s more helpful now to focus on the leadership and resolve that are required – and which we’ve been encouraged to see our Governor and people embody.

“Media coverage zeroing in on Mardi Gras is missing the point. While only a few weeks ago, we as a state and as a country were in a drastically different place then. We had 15 cases total across the country and none yet that we knew of in Louisiana. Sure, Mardi Gras wasn’t canceled but neither were many festivals at that time. Disney World was still open, NBA games were still happening, domestic travel wasn’t yet discouraged.”

Although sporting events worldwide have tried to jump ahead of the curve and limit social gatherings as much as possible, that wasn’t always the case.

A Feb. 19 soccer game in Milan that drew large numbers of fans from Bergamo is believed to be the primary reason Bergamo has been one of the most impacted in the world by the coronavirus pandemic.

The biggest soccer game in Atalanta’s history may be one of the biggest reasons why Bergamo has become an epicenter of the coronavirus pandemic.

The top U.S. outbreak sites are either major cities (New York and Los Angeles are the two most populated) or have hosted major events (New Orleans).

Before Mardi Gras, zero confirmed cases had been reported in New Orleans. A month later, the Crescent City is experiencing an outbreak similar to that of Italy and has the highest death rate per capita in the United States.

“It really doesn’t even take that many people, if they are sick or just carriers of it, to introduce it into the population and have it spread like wildfire in a population,” Reddy said. “If the question is, ‘Can we say they were not accelerants because there wasn’t a huge outbreak?’ I don’t know if we can necessarily say that.

“In Arizona, we still have a ways to go in terms of testing. We aren’t doing this rapid population-based testing.”

It’s hard to say whether metro Phoenix will experience infection rates similar to other cities where large events were held, Reddy said.

“We would hope not,” she said. “For something like the Phoenix Open, that was a little farther back. If people were infected and live locally, we would probably know about it by now.”