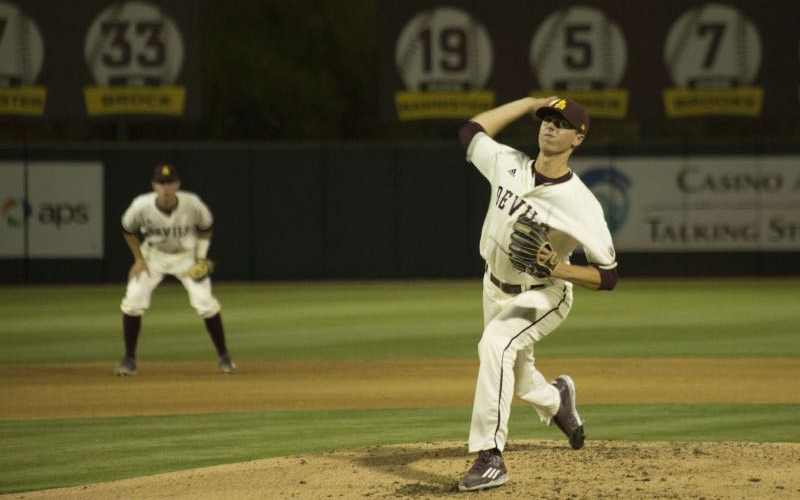 Ryan Hingst had an up-and-down career in the maroon and gold, but nothing will top his no-hitter on March 25, 2016, shutting out Utah 5-0. (Photo courtesy Coleton Berry/The State Press)

PHOENIX – On March 25, 2016, sophomore Ryan Hingst did what only nine other pitchers in Arizona State baseball history had done before him. Hingst fired a no-hitter in a 5-0 win against Utah at Phoenix Municipal Stadium.

The El Paso, Texas, native struck out nine and walked three on 121 pitches for the Sun Devils, who were in desperate need of a win after losing five in a row, including the opener to Utah a day earlier.

“In (terms of) baseball (achievements), this is number one for me,” Hingst told Cronkite News. “Not too many guys get to experience that and I was fortunate to be in the right place at the right time.”

The right-hander was a little less mellow in his postgame comments four years ago, likening the experience to “being on cloud nine.”

“I don’t even know how to put it into words,” he said.

“That was pretty special,” coach Tracy Smith told reporters after the game. “He’d been throwing the ball really well and earned that opportunity to start today.”

A combination of injuries, a four-game losing streak and Hingst’s success out of the bullpen (he finished the season with a 3.06 ERA in 15 appearances with just two starts), led Smith to tab Hingst for his first start of the season, and first career Pac-12 start.

It was an unfamiliar feeling for Hingst, whose first eight appearances of the season, and 47 of 58 career appearances, came out of the bullpen.

“Starters usually show up to the field a lot later than everyone else does,” Hingst said. “So the weird part for me is I’m sitting in my apartment waiting to leave, I didn’t know what to do.”

Hingst didn’t change his routine once he got to the ballpark. Once he toed the rubber, it was business as usual through six shutout innings. When he got back to the dugout following the sixth inning, he noticed something was different.

“(In the sixth inning), I noticed everyone was ignoring me,” Hingst said after the game. “(Brandon Higelin), our pitching coach, usually sits next to me in the dugout between innings. He didn’t do that those final three innings. It made me look at the scoreboard between innings and that’s when it kind of hit me (that I was throwing a no-hitter).”

The biggest threat to the no-hit bid came in the eighth inning when Utah nine-hole hitter A.J. Young hit a one-out pitch deep to center field that was run down by center fielder Andrew Shaps.

“Oh, my god, the second he hit it (my heart dropped),” Hingst said, recalling the moment. “He absolutely scorched it. If it was a day game, that ball is probably out. Luckily, it was pretty dead that night so the ball wasn’t carrying too much.

“The second he caught it, it was a huge rush. Every game like that has those big plays, so once he made that play, it was like ‘check that box, every no-hitter needs one of those.'”

He followed through on that promise, watching Shaps squeeze the final out in center field to cap off the historic moment, the embrace from catcher Brian Serven and the mob from his teammates bearing down on him.

“At that moment I was just ready for it to be over,” Hingst said. “I was exhausted and ready to go celebrate.”

The first person he called after it was over? His mom, who didn’t pick up. He called his dad right after, who answered with both of his parents there, his mom in tears, his dad proud as ever.

What did Hingst do to celebrate? Rush home and take a pair of quizzes due at midnight.

The no-hitter was the first since the 2013 season when then-freshman Ryan Kellog blanked Oregon State, 4-0.