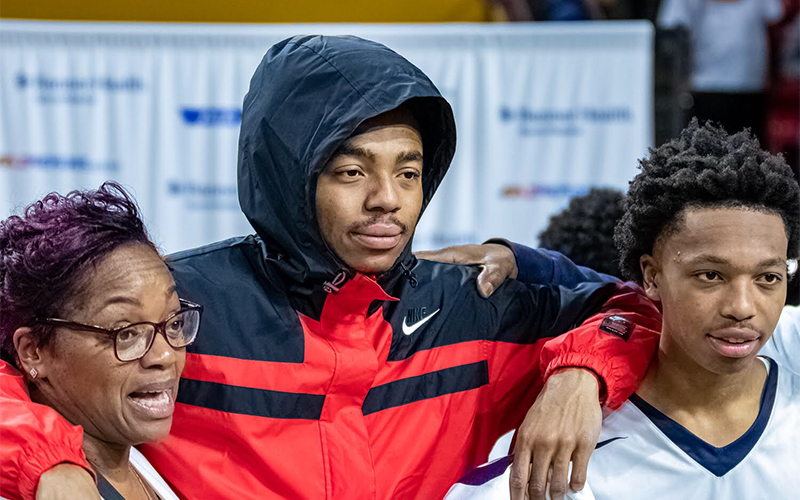 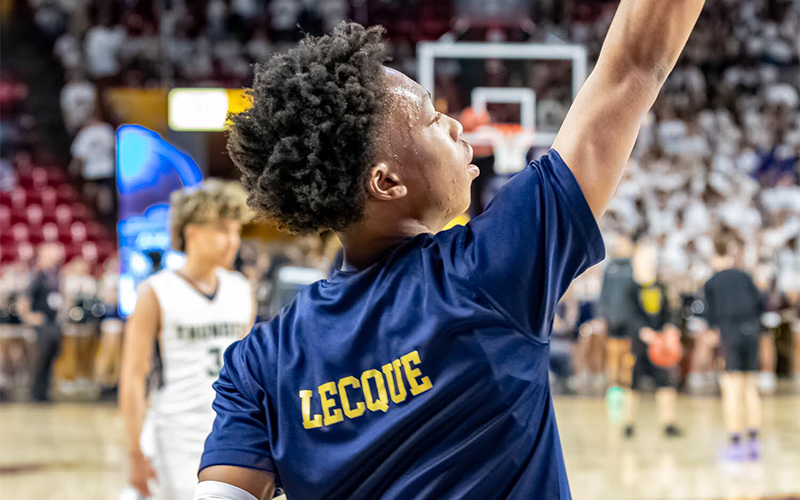 Dasean Lecque warms up in Desert Financial Arena before he and No. 1 Desert Vista challenged No. 11 Mountain Pointe in the 6A state final. (Photo by Nathan Hiatt/Cronkite)

TEMPE – When Desert Vista sophomore Dasean Lecque – the younger brother to Phoenix Suns rookie Jalen Lecque – transferred from New Jersey to high school in Arizona, he was on a mission to showcase his skills.

“I felt like I was very underrated,” Lecque said. “I think some people think that I am just a shadow of my brother, so I felt that I had to come out here and prove something.”

As No. 1 Desert Vista challenged No. 11 Mountain Pointe for the highly anticipated all-Ahwatukee Foothills 6A boys state championship game on March 3, Lecque had a perfect opportunity to do just that.

With Lecque playing a key role, Desert Vista won, 75-55, at Desert Financial Arena. The 6-foot sophomore guard finished with 21 points, four rebounds and four assists with his family and friends in attendance in Tempe, including brother Jalen, who didn’t have a G-League game with the Northern Arizona Suns that night.

FINAL: No. 1 Desert Vista wins 75-55 against No. 11 Mountain Pointe in the All-Ahwatukee 6A Boys State Championship.

What a way to finish the title win. @sportscronkite. #AZPreps pic.twitter.com/dDE3ffAqlf

“It is crazy,” Jalen said. “I remember winning my national (prep) championship with (Brewster Academy) last season, so it is just crazy that little bro is doing it big.” 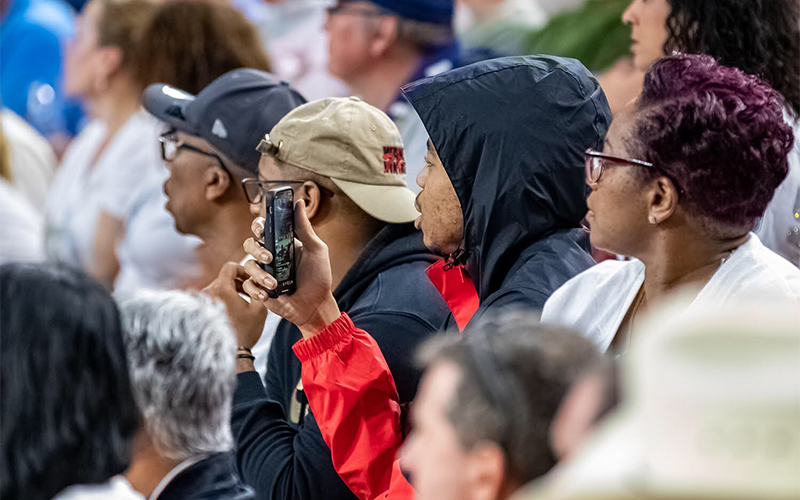 NBA rookie Jalen Lecque didn’t have a G-League game with the Northern Arizona Suns on March 3, so he came to Desert Financial Arena to support his younger brother. (Photo by Nathan Hiatt/Cronkite News)

Jalen, a 6-foot-3 guard known for his viral dunks, said he sees in Dasean the same passion and hunger to play he has.

After the game, Dasean said that to have his older brother in the stands, again, was just like old times and “very cool.”

“I have been going to his games and he has come to my games since we were little,” Dasean said. “We always supported each other, so it is just great to have him come to a big game like this and for us to get the win.”

Jalen has certainly had a positive effect on his little brother, who’s considered a four-star recruit.

“He has been a great impact,” Dasean said. “He has taught me a lot, mostly off-the-court stuff and also with my mentality and how to be a dog. It is great to have an older figure like that, having him there for me and helping me get better and more mature.”

When Desert Vista coach Gino Crump was asked about Jalen being in attendance for Dasean, he smiled.

“It is awesome,” Crump said. “Who could ask for better? (Dasean) tells me that he can outshoot his brother, and I believe him. It is great.”

Crump was extremely impressed with the performance that Lecque put on against Mountain Pointe, as well.

“He plays beyond his years,” Crump said. “We have a very young team, and it is just hard to believe that we have so many young kids, a sophomore that does what he does. It is just unbelievable.”

When Lecque arrived at Desert Vista, he spoke at the first practice to senior forward Osasere Ighodaro – a four-star Marquette signee – about his mission to play hard every game.

Ighodaro finished with a game-high 32 points on 14-for-16 shooting from the field, and he added 11 rebounds and six blocks against Mountain Pointe.

Since the start, Lecque believed Desert Vista could win the 6A title. 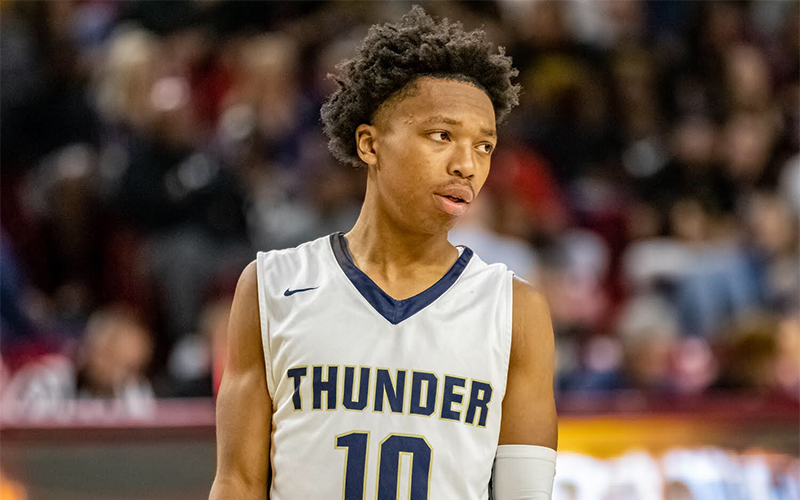 “Mountain Pointe is a great team, but I am glad that we pulled it off. I am blessed.”

A win against Mountain Pointe, though, made it that much sweeter. AZCentral reported it was the first state championship meeting for the Ahwatukee Foothills rivals in basketball, football or baseball.

“This is going to go down in the history books,” Lecque said.

“He is our offensive punch when we need one,” Crump said. “He just gets us a bucket when we have to have one. He can handle the ball and he steadies us, and the guys look for him when we are in trouble.”

As he reflected, Crump said that Lecque struggled defensively when he first arrived at Desert Vista, saying that he struggled with defensive rotation and defensive principles.

That changed, though, and Crump said Lecque has become a lock-down, on-ball defender.

“Sky is the limit for him,” Crump said. “I mean, he gets downhill with ease and shoots the ball. He is a difficult kid to check, and I am just glad that we don’t have to check him.”

Jalen Lecque had a similar assessment about his younger brother’s potential.

“Just like people say sky is the limit for me, the sky is definitely the limit for him,” Jalen said. “We both have that same hunger. We both grew up in the same household, so we both just have that same mentality. I talk to him every day and he talks to me, so we just keep that strong.”