Makenna Newkirk and Katie McGovern escort Leighton Accardo onto the ice for the ceremonial puck drop before the first game of the Dream Gap Tour. The 8-year-old hockey player is currently battling cancer. (Photo by Jenna Ortiz/Cronkite News)

Those were the words of Katie McGovern after receiving Player of the Game honors following the first game of the recent Dream Gap Tour at Oceanside Ice Arena.

McGovern, a former standout for the storied University of Minnesota-Duluth women’s hockey program, scored the game-winning goal in the third period to beat fellow Arizona native Makenna Newkirk’s team. The crowd roared with excitement and brought McGovern, a Scottsdale native, back to her youth at Oceanside.

The tour, put on by the Professional Women’s Hockey Players’ Association (PWHPA), was a temporary solution for women’s hockey players searching for a pro league. The six-stop showcase included exhibitions against each other and alumni from host NHL teams, community engagement events, and clinics with youth teams. The teams each had 17 players, featuring Olympians and NCAA champions from North America. 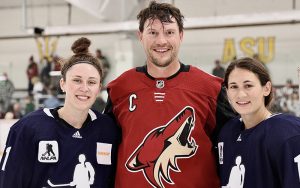 Several signs dotted the glass, including two large cutouts of their faces. One sign read “McGovern is my P.E. teacher!”

“I think one of the most special parts is seeing all the girls in the stands,” Newkirk said. “To see how far women’s hockey and girls’ hockey is growing down here is absolutely remarkable.”

Arizona was the one of the few West Coast locations on the North American tour that stopped in Toronto, Chicago, and Philadelphia. There’s a reason. Hockey among females is growing faster in Arizona than in any other NHL market within the United States over the past five years, as reported by USA Hockey.

The players on the tour developed in NCAA programs, something Arizona has yet to achieve in women’s hockey. 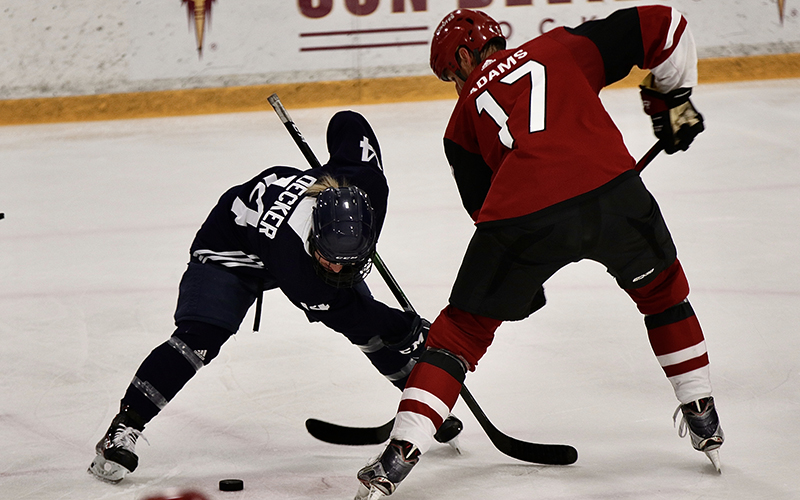 “Women’s college hockey is super competitive, and it keeps getting better and better,” Kessel said. “That’s where I took off as a player.”

Kessel played four seasons with the Minnesota Golden Gophers and won the Patty Kazmaier Memorial Award in 2013, which is given to the top women’s player in college hockey. She also won three national championships in 2012, 2013, and 2016.

The championships helped the team play in front of thousands of fans throughout Kessel’s career.

“Everybody in the state knows you,” the Wisconsin native said. “I didn’t even grow up in Minnesota and I think that’s where I’m most known.”

Both the Arizona State and Grand Canyon University club programs are in their fourth and third years respectively in the Western Women’s Collegiate Hockey League.

McGovern, a former assistant coach with ASU in 2017, saw the Sun Devil program grow from 10 to a full squad with scratches. The team recently advanced to the WWCHL Championship for the first time in program history, before losing 5-1 to Colorado.

Newkirk, a former captain for Boston College, thinks both programs have grown from the efforts of former players coming back to help. She named her friend, GCU assistant coach KC McGinley, along with ASU head coach Lindsey Ellis, former Olympian Lyndsey Fry and McGovern as people committed to growing the game. 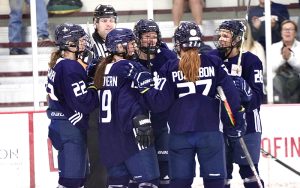 Katie McGovern, second from left, celebrates with her teammates during a game. “It’s been phenomenal. This is the rink I grew up playing in, so to see it kind of come full circle, playing with these Olympians, professional athletes, it’s just incredible.” (Photo by Patricia Vicente/Cronkite News)

Kessel thinks college programs will grow from “continued growth and exposure” and support from the NHL in women’s hockey.

“The NHL clubs that are stepping up and helping us, it’s huge for the growth of women’s hockey and hockey as well,” she said.

McGovern greeted Arizona Kachinas players after the game, some of whom she coached on the 16U team. All watched in awe as their coach played alongside some of the best in the game.

“You can’t become what you can’t see,” she said.