Poll volunteer Richie Ressel talks to a voter Tuesday morning outside the polling place at the Salvation Army Phoenix Citadel. Election officials reported high turnout but few problems over the course of the day, despite fears over the novel coronavirus. (Photo by Ao Gao/Cronkite News)

TEMPE – Voting in Arizona’s presidential preference primary Tuesday was decidedly calm in the midst of a decidedly anxious time in the face of the coronavirus pandemic, polling officials around the state said.

Concerns about COVID-19 prompted Ohio officials to cancel their primary just hours before polls were set to open Tuesday, but elections in Arizona, Florida and Illinois proceeded as scheduled. Despite some minor problems Tuesday, Arizona poll workers and voters both reported mostly smooth sailing.

Pinny Sheoran, a worker stationed at a Fountain Hills polling location, said there had been a “steady stream” of voters coming in during the day, but no lines.

“Every 10 minutes or so we have one or two people come in,” said Sheoran, who is also advocacy chair of the League of Women Voters of Arizona.

Sheoran said sanitization precautions that were instituted in response to the coronavirus were being strictly adhered to Tuesday. All polling workers wore gloves, sanitized the touch screens after each voter’s use and wiped down common surfaces frequently, she said.

COVID-19 seemed to be playing a bigger role elsewhere, with voters in Illinois complaining to Election Protection, a coalition of voting rights advocates, about polling places without hand sanitizer or hand-washing facilities.

Common Cause Florida Chair Liza McClenaghan said polling places there saw empty parking lots and no voting lines, which she attributed to fears surrounding the highly contagious respiratory virus that causes COVID-19. One polling place saw 20% of its normal business, she said, and some precincts in Palm Beach County were not able to open when poll workers failed to show up.

Yuma County Elections Director Mary Fontes said two poll workers did not show up to work there Tuesday because of fears of the coronavirus, but that did not keep the polls form opening.

“It wasn’t because of their health,” Fontes said. “They didn’t want to bring anything home with them if anyone came into the polling location – but they closed the schools in Arizona so that affected our poll workers even more.”

Despite fears of the coronavirus, Arizona State University student Sahara Sajjadi said she went to the Horizon Park Community Center to vote at 10 a.m. Tuesday.

“I tried to be really safe about it. I wasn’t touching my face or anything that I didn’t have to,” she said. “As someone who has been looking forward to voting, it would be a shame for me to sit this one out. It’s really important for me.”

“It took like two minutes. At that time, I was the only person voting.”

Still, Sajjadi said she wished that Arizona had postponed the primary to a later time because of the virus.

“It’s voter suppression because people are scared. Especially if they’re older or immunocompromised, they’re not going to be enticed to go vote when they could potentially be harming themselves.”

Kathy Figueroa, an 18-year-old who voted for the first time Tuesday, said she was “that people are not showing up to vote” because of the virus. But she was not concerned for herself.

“I went in, didn’t even spend five minutes and then walked out, just because there wasn’t lines, there wasn’t people voting,” said Figueroa, adding that people who have been lining up at grocery stores should spend a few minutes at a local polling place instead.

“We’ve seen a trickle of people come in and use the vote machines,” she said. “We’re not seeing huge lines or crowds of people.”

But officials in Maricopa County said that overall turnout this year was well ahead of the 2016 primaries, even though wait times were short.

More than 40,000 Democrats had cast votes by early evening, compared with 35,000 for the entire day in the 2016 primary, said Megan Gilbertson, a county elections department spokesperson. 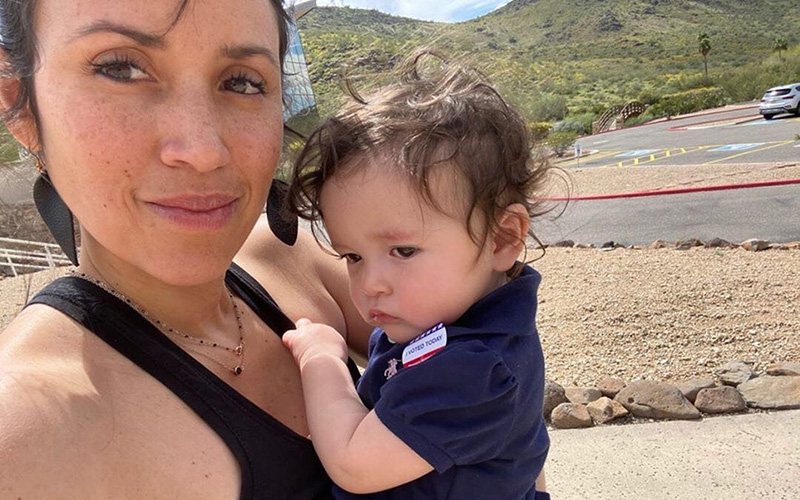 Maybe Alfonzo poses for a selfie with her 11-month-old daughter, Miranda, after voting in Tuesday’s presidential preference primary in Arizona. Alfonzo said in an Instagram post that she had been worried about voting in the midst of a COVID-19 pandemic but that there was “antibacterial all over the space” and she’s glad she voted. (Photo courtesy Maybe Alfonzo)

The 2020 presidential preference election had already seen heavy voting before polls opened Tuesday – the Arizona Democratic Party reported that about 480,000 early ballots were cast this year, already exceeding the 468,461 total for 2016.

Election Protection did field calls from ASU students who are confused by signage at polling locations near campus, said Patty Ferguson-Bohnee, an election protection coordinator with Arizona Native Vote.

Ferguson-Bohnee said in an afternoon conference call that Election Day had been “a little bit quiet,” with the primary issue she saw was voters showing up to vote in the wrong county.

Maricopa County cut the number of polling sites from 229 to 148 to cope with COVID-19 problems, but also allowed voters to cast a ballot at any vote center, not just their own – but they still had to stay in the county.

Ferguson-Bohnee said confusion around this change has predominantly affected tribal members whose tribes are in multiple counties and college students who are displaced from the county they are registered in due to moving out of shut down universities.

And voters like Lillian Nash, 19, of Phoenix, chose to stay away altogether. Nash said she self-quarantined because she has a compromised immune system.

“I think this ridiculous, and I think this is voter suppression in my opinion,” she said. “I thought they would postpone it, but they didn’t. I have no way of going or I would get sick.”

Kristen Clarke, president of the national Lawyers’ Committee for Civil Rights Under Law, said Tuesday she has seen the virus “produce a cascading effect” in other states’ elections. She said some Ohio voters did not know the election was postponed until they showed up to the polls Tuesday.

“These elections are happening under unprecedented circumstances,” Clarke said. “No doubt this moment underscores the need for reform.”