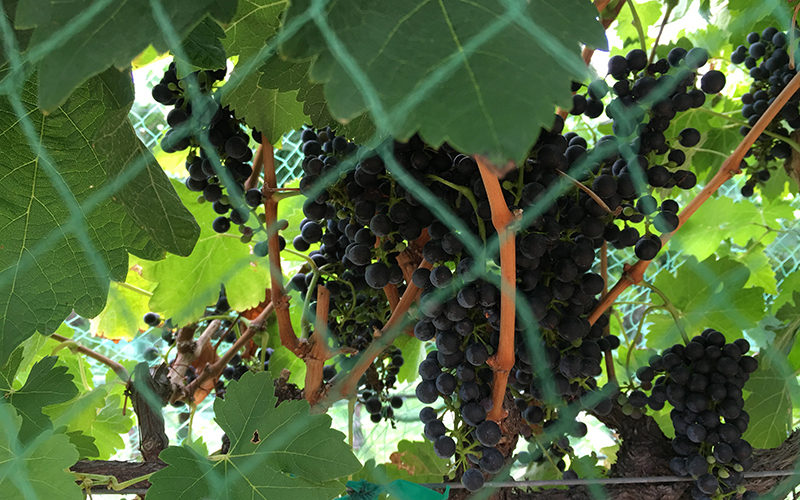 Grapes on the vine in a 2016 file photo from Page Springs Vineyards, one of the members of the Verde Valley Wine Consortium, which is seeking to make part of Yavapai County a federally designated American Viticultural Area. (Photo by Mindy Riesenberg/Cronkite News) 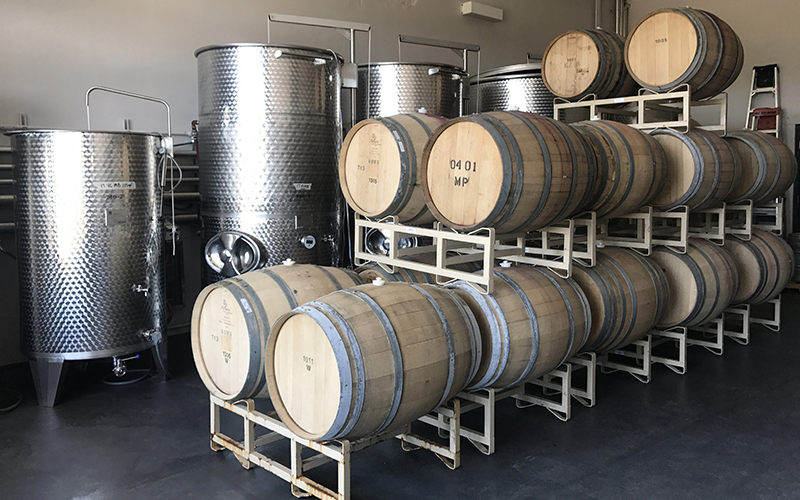 Wine barrels at the Southwest Wine Center at Yavapai College’s Verde Valley campus. Arizona wine tourism generated $56.2 million in economic activity for the state in 2017, according to the Arizona Office of Tourism. (Photo by Allison Bailey/Cronkite News)

WASHINGTON – Wine drinkers may soon be able to reach for that Verde Valley vintage, if local wineries and vineyards have their way.

Their application to designate the Verde Valley as a federally recognized American Viticultural Area is nearing approval by the Alcohol and Tobacco Tax and Trade Bureau.

If approved, the designation would allow vineyards and vintners in a 200-square-mile area of Yavapai County to label their product with the specific location where the grapes were grown or the wine made, instead of just the state.

“It will give the Verde Valley area much greater recognition,” said Tom Wark, a spokesman for the National Association of Wine Retailers. “It will lead to more people visiting the wineries, for sure, and it will increase the recognition of the wines made from those grapes.”

A spokesman for the Alcohol and Tobacco Tax and Trade Bureau said the federal title mainly lets grape growers give more information about the grapes to their customers. The public-comment period on the application is open until April 28.

Mark Beres, the president of Flying Leap Vineyards, owns several vineyards in Willcox and Sonoita and said the initial media attention that comes with an AVA designation does help in the short run. But he thinks they may have reached a saturation point.

“At this point, there are so many AVAs in the United States,” Beres said. “I think the power of the AVA designation has gone down.”

Willcox’s designation as an AVA has had little to no impact on customer traffic or pricing power for him – perhaps, he said, because customers don’t often know what an AVA is.

“And if you’re sitting there and you have five to 10 minutes to spend with a customer, you’re going to be talking about the wine, not the AVA,” he said.

Still, he said, he hopes that Verde Valley wineries see a bigger impact with the designation.

Wark said this is an appropriate time for the area to be recognized federally because Arizona wines have been receiving more attention from the media. The federal designation increases the value of the wines and the grapes grown inside the area, he said, but most importantly gives the area credibility.

Arizona wine tourism industry generated about $56.2 million in economic output in 2017, according to a report by the Arizona Office of Tourism.

Paula Woolsey, the vice president of the Verde Valley Wine Consortium, said wineries being able to label their produce with a specific region can make a big difference in marketing.

“The smaller you go as far as designating where it comes from, the more impactful it is for people to sell it,” Woolsey said.

Woolsey said what makes Verde Valley wine unique is the drastic change in temperature from day to night. A range of 110 degrees in the day to 60 degrees at night, she said, is ideal for growing grapes for wine and keeps them at balanced levels of sweet and acidic.

The consortium’s request has been under review for three years, but she thinks the wait will be worth it.

“We’re a really small wine region, and the AVA is going to be a small AVA,” Woolsey said. “But when we finally get it, it’s going to help us let the world know what we have going on here.”