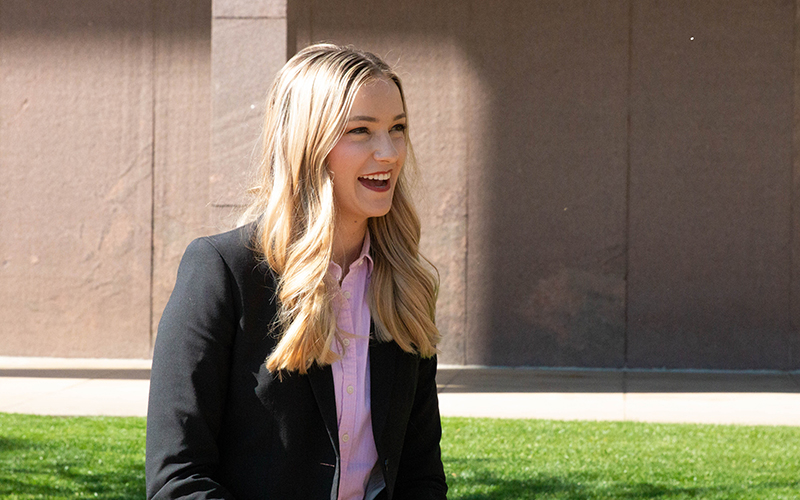 Hannah Day graduated from Arizona State University with a degree in education because of a scholarship from the Arizona Teachers Academy. “Without the teachers academy,” she says, “I would be miserable with an online business degree.” (Photo by Jessi Zorker/ Cronkite News)

PHOENIX – To help with Arizona’s teacher shortage, the three state universities hope to expand enrollment in the Arizona Teachers Academy through $15 million in funding from the state.

The New Economy Initiative, part of the budget proposal made by Gov. Doug Ducey in his State of the State address, seeks an additional $165 million for Arizona universities for the 2021 fiscal year. Of that, $15 million would go towards the academy, which provides tuition scholarships for undergraduate and graduate students who agree to teach in Arizona.

“Part of the reason we support the teachers academy is really all about the New Economy Initiative and the fact that we really have to think about (grades) K-20,” said Larry Penley, chairman of the Arizona Board of Regents. “We can’t divide education up if we’re going to be successful in Arizona with educational attainment.”

The “new economy,” he said, is characterized by further automation, artificial intelligence, workforce digitization and job growth in large cities, among other things. Arizona is currently falling short of its goal to reach 60% attainment of post-secondary education for Arizonans, and the new economy initiative aims to reach that goal through focusing more on kindergarten through college.

The Arizona Teachers Academy, envisioned by Arizona Board Regent Fred DuVal to help combat the state’s teacher shortage, was established by Ducey in 2017.

As of August 2019, about 4,800 teacher positions were vacant or filled by teachers not meeting teaching requirements, according to a survey of 150 schools done by the Arizona School Personnel Administrators Association. For the 2019-2020 school year, almost 7,000 positions were unfilled.

The academy scholarships, provided by the University of Arizona, Northern Arizona University and Arizona State University, cover tuition and mandatory fees. Scholarship recipients must sign an agreement to teach in an Arizona public or charter school for the same number of years they received the scholarship.

In the academy’s first year, the three universities funded the scholarships themselves. The 2019-20 school year was the first year the state provided money for the scholarships, according to the Arizona Board of Regents. The New Economy Initiative would continue the state funding for next year.

“The funding came through late last year… and many students had already made plans but we were thrilled to see so many change their plans and take advantage of the teachers academy,” NAU President Rita Cheng said.

This year, $15 million was split between Arizona’s universities and community colleges that are partnered with the universities. To apply for the scholarship, students must complete a Free Application for Federal Student Aid and fill out an application. But the three universities have different methods of giving out the scholarship.

NAU expects to have about 225 graduates in fall 2020 compared with the 27 who graduated in May 2019, according to a report from the Arizona Board of Regents.

“A majority of our focus has been on the elementary and special (education) because that is really where students are getting their first start,” Cheng said. “We need to have quality teaching and consistent teaching at the lower levels so that when students get to high school, they can be prepared for rigorous college curriculum.”

Because the Arizona Teachers Academy is relatively new, Cheng said NAU is focusing on getting the program up and running to have the best teachers in Arizona.

“Our plans are really focused on making sure we provide the best opportunities for students, so our next steps will be to strengthen and increase the opportunities at the community colleges across the state,” Cheng said.

NAU also will work with high schools on a Grow Your Own program, which identifies individuals who want to become teachers and connects them to programs that allow them to get teacher certified.

Carole Basile, dean of the Mary Lou Fulton Teachers College, said ASU hopes post-baccalaureate students will take the scholarship opportunity after getting a degree in another field.

Undergraduate students this year didn’t have to apply to get the scholarship at ASU, she said; it was awarded to those that showed need and were qualified. Graduate students still needed to apply, due to limited spots.

“We didn’t want it to be an onerous process, we wanted to make sure that we were getting scholarship money to as many students as we possibly could,” Basile said. “Then we were using it as a recruiting tool to bring new students into education.” 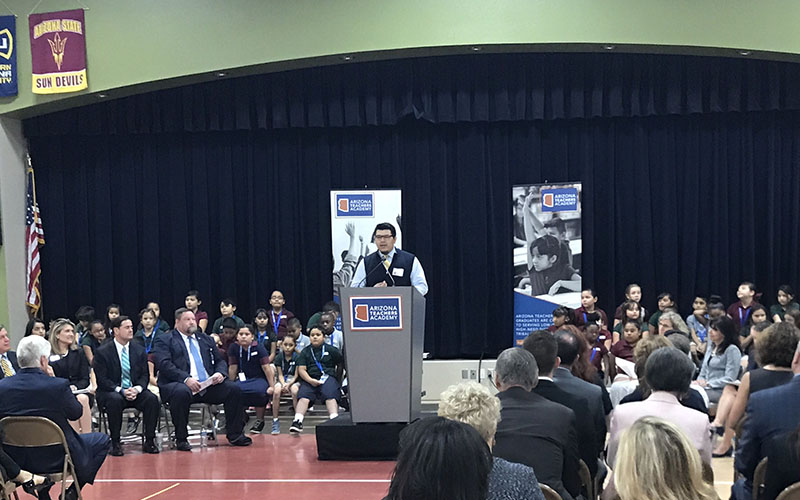 Academy graduates can choose any school to work at as long as it’s a public or charter school, and there is a one year grace period for students to find a job.

If they leave Arizona at any point before fulfilling their required years of teaching, the scholarship will turn to a loan that students must pay back. Certain circumstances, such as military deferment, will be taken into consideration.

ASU student Hannah Day is a recipient of the Arizona Teachers Academy scholarship. She graduated in December 2019 with a bachelor’s degree in secondary education history. Since eighth grade, Day has known that she wanted to be a teacher, thanks to an orchestra teacher who made playing the violin exciting.

“I just thought it was really cool that she had that skill set to make people excited and to bring happiness into people’s lives through something they might not have cared about,” she said.

Day learned about the Arizona Teachers Academy from her cousin in 2017, while she was pursuing an online degree in business. She talked to her counselor at ASU about the scholarship and, after a semester at Mesa Community College, she transferred all her credits to ASU to pursue her teaching degree.

“Without the teachers academy, I would be miserable with an online business degree. It really helped me transfer from a business degree into education,” Day said.

Day, who’s interning at the Arizona Capitol, is excited to start teaching in Arizona and has applied for a teaching position for the fall 2020 semester. She and her husband want to establish their roots in Arizona, Day said.

“I think that it’s great that they’re doing all that they can to get teachers into the classroom. I feel like there’s a lot of people that want to get into education but there’s a lot of limitations for it such as the price,” Day said. “The cost for the education doesn’t always pan out to equal the cost of what you’re going to get paid so it’s just hard to go into it knowing that and taking on the risk of a loan.”

UArizona strongly prefers graduate students and undergraduate juniors and seniors because that’s when most of the teaching programs begin, said Raul Gonzalez, who coordinates UArizona’s program.

In applying for the teachers academy at UArizona, students must include a resume, a statement on future goals and a statement on how the scholarship will be beneficial to them. Those will be used to determine who receives a scholarship for competitive degree programs Gonzalez said.

The biggest challenge the teachers academy faces is awareness Gonzalez said, but UArizona is working to heighten awareness.

Penley said Ducey also is proposing an additional $1 million in the New Economy Initiative to increase advertising for the Arizona Teachers Academy.

“Through a combination of the Arizona Board of Regents marketing (and) outreach by the university itself, we definitely made an effort to expand what people know about the (Arizona Teachers Academy) and overall we’ve seen it grow and grow,” Gonzalez said.