By Sarah Donahue/Cronkite News and /

The Navajo Generating Station near Page burned coal mined in northern Arizona to generate power for such clients as Los Angeles and the Central Arizona Project, which pumps Colorado River water to central and southern Arizona. The station, which shut down in November, had contributed $51 million a year to the area. (Photo by Bill Morrow/Creative Commons) 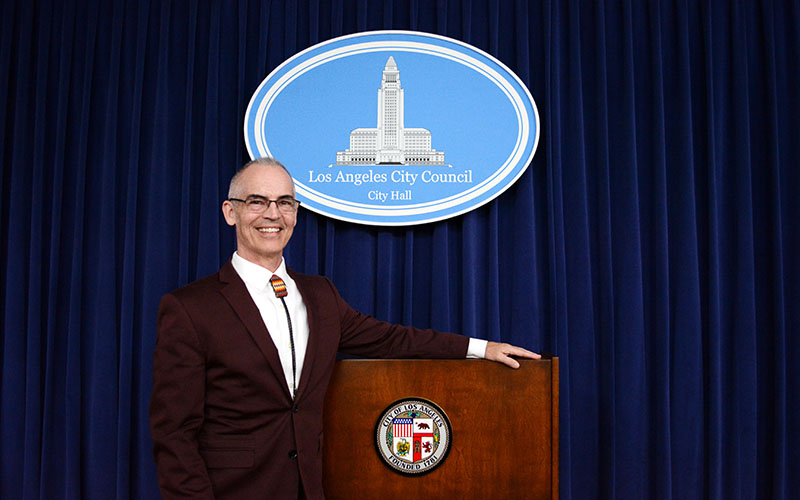 LOS ANGELES – In a city renowned for its green policies, Prius drivers and biodegradable straws, it was only a matter of time before officials would vote to move away from coal powered electricity.

To transition to clean energy, the city sold its shares of a coal-powered generating station on the Navajo Nation in 2016, ending a decades-long relationship.

What seemed like a bright new sustainable future for Los Angeles presented a harsh reality for the tribe, whose members relied on jobs at the Navajo Generating Station, which shut down completely in November. The generating station near Page contributed $51 million a year to northern Arizona and southern Utah.

Last month, the Los Angeles City Council voted to explore ways to continue that energy partnership without funding a generating station that once was the third largest carbon emitter in the U.S. If deemed feasible after a 30-day evaluation, renewable energy soon will travel from the reservation to Southern California. The motion was passed and finalized by Mayor Eric Garcetti.

“We’re talking about solar energy, wind energy, in other words, completely transitioning from coal into renewable resources,” said Mitch O’Farrell, the City Council member who presented the motion. O’Farrell, who is the first member of the council to belong to a federally recognized tribe – the Wyandotte Nation – said he wore a beaded bolo tie for the occasion.

His proposal also acknowledges the economic hardship the Navajo Nation faces with the closure of the generating station, where 90% of the 433 employees were Navajo. The generating station officially closed on Nov. 18, which also negatively affected coal-mining operations on the reservation. 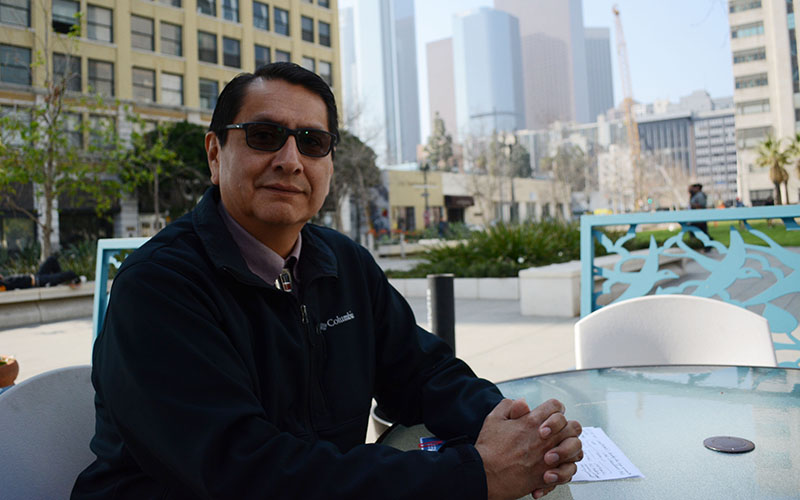 Navajo Nation President Jonathan Nez and members of his administration traveled to Los Angeles to push for continued energy partnerships with the city. “We want to be the leaders in renewable energy in Indian Country,” he told the City Council. (Photo by Sarah Donahue/Cronkite News)

Navajo Nation President Jonathan Nez, who attended the LA council meeting approving the proposal, hopes it will compensate for an estimated $30-50 million revenue loss for the tribe.

“We are resilient people,” Nez told the council. “We want to be the leaders in renewable energy in Indian Country.”

The continued partnership would bring wind and solar powered energy to Los Angeles while fostering economic development for the Navajo Nation, the motion states.

“This is a win-win for everyone,” Nez said.

The council’s unanimous vote started the process of a 30-day feasibility study by Los Angeles’ Department of Water and Power that will evaluate potential costs and benefits for electricity ratepayers.

It’s likely to be cost-effective for Angelenos, O’Farrell said, as LA’s Department of Water and Power still has ownership of the transmission lines linking the reservation and the city.

“The idea is to continue that partnership, but it would be directly between the Navajo Nation and LA for the continued use of those lines,” said Nicole Horseherder, executive director of Tó Nizhóní Ání’, a grassroots organization that advocates for environmental protections and responsible use of natural resources of the Black Mesa area on the reservation.

“The only difference would be that it would be Navajo renewable energy power that would be put on those transmission lines,” she said.

The 2,250-megawatt Navajo Generating Station a few miles east of Page began producing electricity in the 1970s. Its owners ended operations in November because the plant was deemed no longer economically viable.

The generating station and the Kayenta Mine that fed it coal contributed nearly $1.3 billion to the Navajo and Hopi economies since 1987, according to data from Coconino County.

Without the need for coal, the mine closed, too, as the generating station was its only customer.

The costly nature of coal led to the plant’s closure, according to Scott Harelson, spokesman for the Salt River Project, one of Arizona’s biggest utility companies. SRP has partial ownership of the generating station along with Tucson Electric Power and NV Energy.

LA’s Department of Water and Power had been a shareholder until it sold its 21.2% ownership to SRP in July 2016 to move toward clean energy.

In 2017, all the utility owners voted to shut down the generating station. 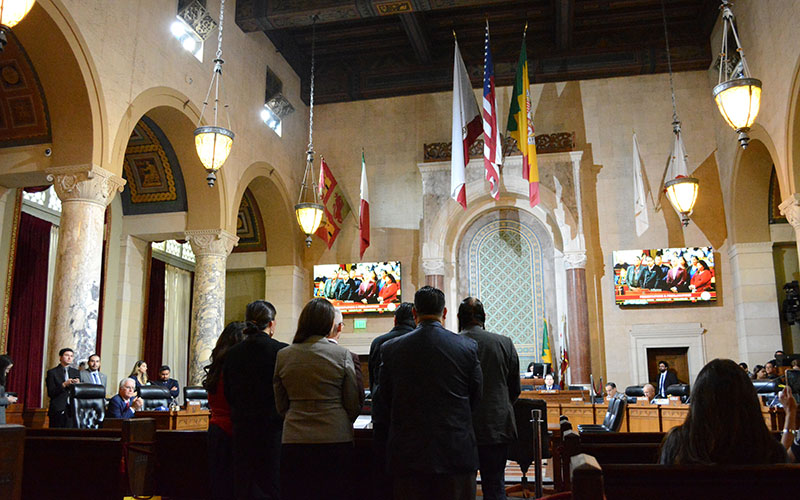 Representatives of the Navajo Nation attend the Los Angeles City Council meeting to support a motion that would bring renewable Navajo energy to the country’s second-largest city. (Photo by Sarah Donahue/Cronkite News)

Loss for the Navajo Nation

There has been a long relationship between Los Angeles and the Navajo Nation, Nez told Cronkite News, and the new agreement would allow that partnership to last “rather than going different ways with bad – I don’t know if I should say it – bad blood.”
Not even a year’s notice was given before the power plant closed, Nez said, and it closed weeks earlier than expected.

“We didn’t know what to do,” Nez said. “There was no transition time.”
In the first fiscal year after the closures of the plant and mine, the Navajo Nation expects income losses of about $40 million – a 23% drop, according to the Institute for Energy Economics and Financial Analysis.

“There are members of the Navajo Nation who would have preferred to see the plant operate because of the well-paying jobs, including the Hopi Nation who relied heavily on the earnings from the Kayenta Coal Mine,” the SRP’s Harelson said. The average salary for workers ranged from $70,000 to $74,000, according to data from Coconino County.

SRP offered new jobs to all 433 of their plant workers, Harelson said. Of those 433 plant workers, 12 stayed in the area to decommission the generating station and 284 redeployed to other energy projects across Arizona.

Nez said that has spurred a migration from Page as former plant workers move elsewhere.
Beyond jobs, people across the reservation are struggling to stay warm during the winter.
“With the closure of the plant and the mine, people have not been able to access basic heating resources,” Horseherder said.

Martin Pasqualetti, professor at Arizona State University’s School of Geographical Sciences and Urban Planning, said he has taken students on field trips to the Kayenta Mine and generating station since the ’70s.

While this operation brought in significant amounts of money for the Navajo, “anybody who was paying attention would know that these power plants don’t last forever,” he said, noting the high cost of implementing proper emission-control standards.

Pasqualetti wasn’t aware of the negotiations between LA and the Navajo Nation, but he said the tribe is always looking for markets for electricity.

A future in clean energy

“Right now, throughout the world, we’re not taking care of our lands,” Nez said. “So there is some traditional knowledge that we can incorporate in this type of transition.”

The 127-megawatt Dry Lake Wind Power Project has been operational since 2009 and plans for a new 477-megawatt wind farm were approved in December by The Navajo County board of supervisors.

The best way to take care of Navajo lands, he said, is to utilize what the creator has provided: wind and sunlight. California’s demand for clean energy presents an opportunity for the Navajo to continue their relationship, he added. 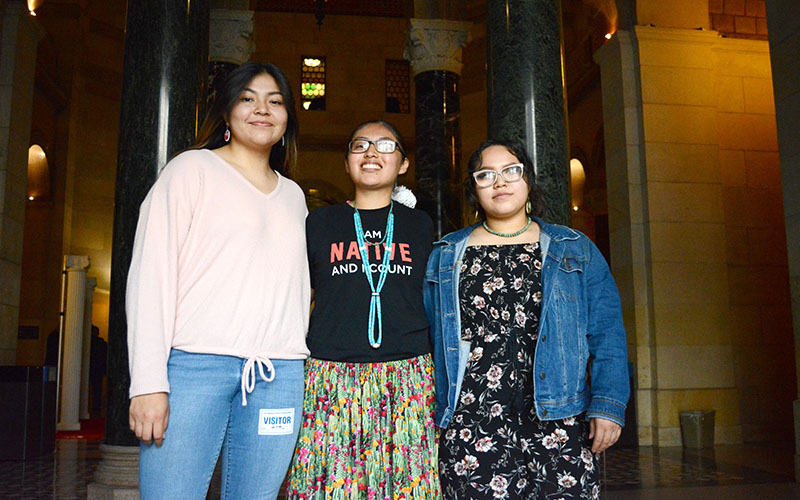 O’Farrell said Los Angeles’ attitude on sustainability and its ability to influence is its “badge of honor.” Contributing to the renewable movement and thinking outside the city limits hopefully will play an outside role in slowing the effects of climate change, he said.

“I hope that we’re entering into a new age of enlightenment,” O’Farrell said. “Because it’s going to take everyone everywhere to pull together to slow the effects of climate change.”

The Navajo people and reservation have been “overlooked for a very long time,” he said, adding that a continued partnership with Los Angeles would help the tribe take another step toward self-determination and self-sufficiency.

Nez predicted “a great future for both LA, the (Navajo) Nation and the globe as a whole.”

The Navajo government and people, he said, “cannot view ourselves as victims.”

Although Native Americans were almost completely obliterated after Europeans arrived in the New World, “we are still here.”

Looking to the future and creating a plan to succeed despite hardships faced in the past, Nez said, is the “best revenge.”