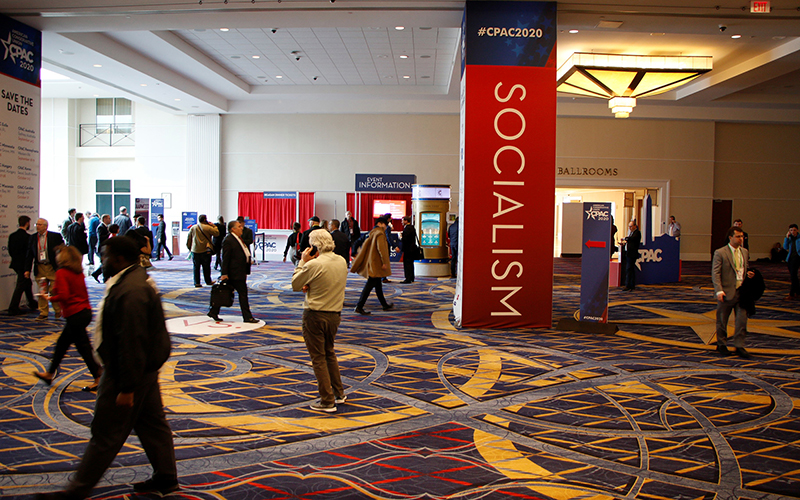 The Conservative Political Action Conference is an annual celebration of conservative politics and politicians, but it was hard to escape this year’s other theme, with speakers constantly warning of what they called the threat of socialism. (Photo by Christopher Scragg/Cronkite News) 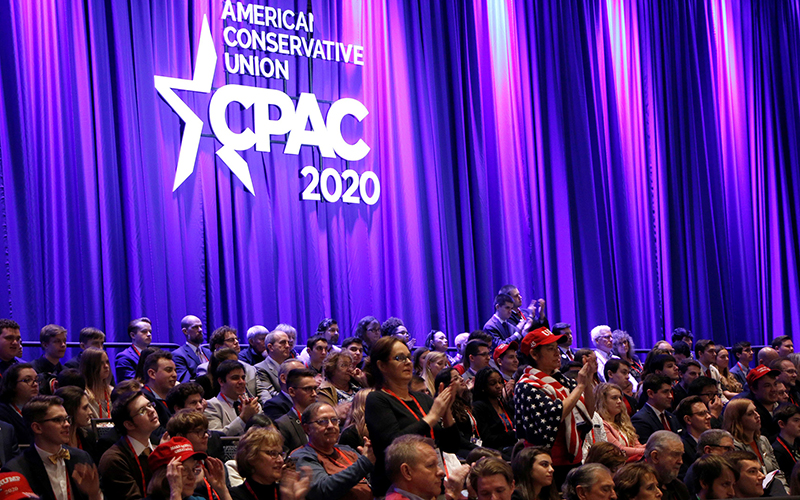 Thousands attended the Conservative Political Action Conference in suburban Maryland where, in addition to a steady drumbeat of warnings about socialism, visitors were treated to an abundance of flags, MAGA hats and other Trump gear. (Photo by Christopher Scragg/Cronkite News)

NATIONAL HARBOR, Md. _ Grand Canyon University student Talesa Jaramillo-Ortiz was excited to be celebrating with like-minded activists at the annual Conservative Political Action Conference here – even as she worried about the specter of socialism in this fall’s elections.

It was a theme repeated throughout the three-day event, where the usual applause for President Donald Trump, who is scheduled to speak here Saturday, fought for time with warnings about the country’s possible left turn.

No danger of that among the crowds at the conference who filled the halls at the Gaylord National Resort and Conference Center this week. many wearing Make America Great Again hats along with jackets, shirts and more festooned with Trump’s name.

But overlooking the ballroom entrance was an always-visible red banner stretching from floor to ceiling with the word “socialism” spelled out in giant white letters.

Jaramillo-Ortiz, who is a member of the Turning Point USA chapter at Grand Canyon University, said she has friends who are Sanders supporters and that she worries Sanders could win against Trump because of his impassioned base. 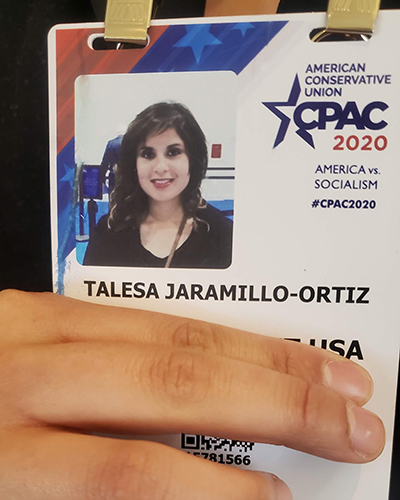 Grand Canyon University student Talesa Jaramillo-Ortiz shows off her credentials for the Conservative Political Action Conference. Like many at the event, Jaramillo-Ortiz said she worries voters will turn toward socialism in this fall’s elections. (Photo by Christopher Scragg/Cronkite News)

“I feel that he is the main threat right now to Trump,” Jaramillo-Ortiz said of Sanders. “His base is so rabid, and it’s so devoted to Bernie, it’s akin to Trump in 2016.”

Sanders, who calls himself a Democratic Socialist, held an 11.1 percentage point lead over former Vice President Joe Biden, his closest competitor in the Democratic presidential field as of Friday, according to an aggregate of national polls by Real Clear Politics.

A 2019 survey by YouGov for the anti-communism group Victims of Communism Memorial Foundation, showed 70% of American millennials would likely vote for a socialist candidate.

Charlie Kirk, the founder of Turning Point USA – a conservative organization with chapters at colleges nationwide – said in a CPAC speech Thursday that the growing acceptance of socialism has its roots in college campuses which he called “the battleground for the hearts and minds for the next generation.”

“Whatever happens on college campuses, will soon happen in the halls of Congress,” Kirk said. “They are a harbinger for things to come.”

Socialism turned up as an element in many of the presentations, from “Socialism destroys humanity,” to less-obvious topics, like Rep. Paul Gosar, R-Prescott, and his presentation on rare earth minerals as part of “The global struggle for resources and the 21st century socialist axis of evil.”

Gosar echoed Kirk’s worries that higher education is biased toward socialism, saying the current education system is “not presenting both sides.”

“I think once you empower people to have that critical thinking – what about me, how do I play this part – I don’t think they flock to socialism because it’s never worked,” he said.

But even fears of a socialist movement couldn’t temper the excitement of Trump’s supporters, who roared their approval Thursday for Vice President Mike Pence as he ticked off a list of Trump’s accomplishments. Pence’s charge that the Democratic Party had become radical elicited a chorus of boos.

“It’s really astonishing to think that the party of Harry Truman and John F. Kennedy is actually on the verge of nominating an avowed socialist as their party’s standard-bearer,” Pence said.

The socialist scare may be worrying some, but it only drives others to fight harder up to Election Day. Coming to CPAC, Gosar said, is like “the calm before the storm.”

“You rally, you gather, you find commonality and then you disperse,” he said, “and then we’ll get back together again come Nov. 3.”