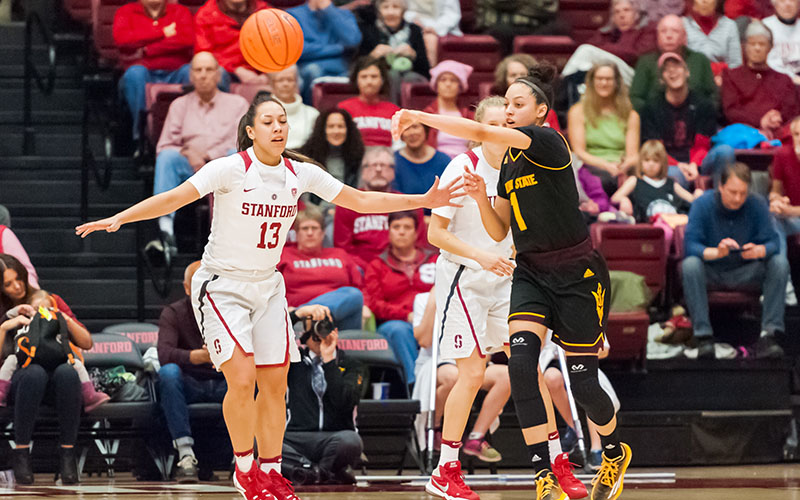 Reili Richardson recently became the all-time leader in assists in Arizona State women’s basketball history. She is closing in on the ASU men’s record, too. (Photo by Douglas Stringer/Icon Sportswire via Getty Images)

TEMPE – As Reili Richardson made a move and drove toward the basket, she noticed Ja’Tavia Tapley out of the corner of her eye. Richardson flicked a precision pass that afforded Tapley an easy layup in a win against Washington at Desert Financial Arena recently.

It was a play that Arizona State coach Charli Turner Thorne has witnessed many times before, but this moment meant more. Richardson recorded her 539th assist, pushing her past former Sun Devils player and mentor Briann January to become the all-time assist leader in ASU women’s basketball history as a senior guard.

January played for the Sun Devils from 2005 to 2009 before she was drafted into the WNBA.

“I passed a legend,” Richardson said.

After back-to-back four-assist performances against Colorado and Utah last weekend, Richardson is five assists away from the overall ASU basketball assist record (551) that men’s basketball guard Derek Glasser set in 2010.

Richardson could break that record, as well, as No. 24 ASU (19-9 overall, 9-7 Pac-12) completes its regular season against California on Friday night and No. 4 Stanford on Sunday afternoon at Desert Financial Arena.

Richardson has etched her name into the record books with hard work and talent, but she also had to adapt to what Turner Thorne needed when she arrived in Tempe as a freshman.

“I don’t think that I really wanted to be a point guard in high school,” Richardson said. “I wasn’t that much of a point guard (most of my career). Then I came here and it was, ‘I need you to be the point guard.'”

“She is truly one of the best passers that I have ever had the privilege to coach.”

Turner Thorne always knew that Richardson would be an excellent player.

Richardson signed with ASU as a five-star recruit from California and was the No. 47 player in the ESPN HoopGurlz rankings for 2016. As a high school senior, Richardson won a California Interscholastic Federation Division I state title, finishing with 26 points, nine rebounds, five assists and three steals in the game.

“Jeff Sink, her coach at Brea (Olinda) High School called me when (Richardson) was a sophomore,” Turner Thorne said. “We have known each other for years. He is like, “Charli,’ – and he has had a ton of great, high-level, Division I players, – ‘You have to come look at this kid.'”

Sink knew how dynamic Richardson could be, so he pushed her every day to improve her game.

With that, Sink isn’t surprised that Richardson continues to make history.

“Nothing Reili accomplishes surprises me because she was and still is willing to put the work in,” Sink said. “She loves the game.”

Sink said that Richardson always had elite vision on the court and an innate ability to pass, but he had to push her specifically to become a pure point guard as her high school career progressed. Sink wanted the ball in Richardson’s hands, and that decision led to the state championship win in 2016.

This also eased her transition in Tempe, and allowed her to develop her game further.

This all has translated into Richardson currently averaging a career-high 9.8 points per game.

“I made this comparison the other day (that) the best players in our program and probably every program get better every year and add something to their game,” Turner Thorne said. “I am not talking about just experience or being a little bit more consistent. I mean, really (adding) parts to your game. That is what Reili has done.”

Richardson idolized the late Kobe Brynat. Just like her childhood idol, Richardson has always possessed a clutch gene. Not to mention, she also has always wanted to work hard and improve her game.

This season, her clutch gene has been increasingly evident. Turner Thorne has noted how Richardson “flips a switch” in the fourth quarter and overtime to take over games.

Richardson most notably channeled that “Mamba Mentality” against Southern California in Tempe on Jan. 31. In the Sun Devils’ first game after Bryant died, Richardson scored a career-high 24 points, including the game-winning 3-pointer with 1.9 seconds left in triple overtime.

“It is a great tribute to all the great players and Kobe (Bryant),” Turner Thorne said. “That doesn’t just happen. You don’t just keep hitting game-winners and big shots. You work.”

‘It is kind of crazy’

Turner Thorne hired January as an assistant coach in August 2017. Before January decided to more so continue to pursue her WNBA career, she helped coach the Sun Devils from 2017 to 2019.

Richardson played as a sophomore and junior when January was an assistant coach.

“I can see every day that they just take small strides in being better point guards,” said January last season about Richardson and fellow now-senior guard Kiara Russell. “It is nice for me to watch, and I am just here as a sounding board to give them some advice and show them and talk to them about what I see to help grow their game.”

Everything now is just surreal for Richardson.

“It is kind of crazy,” Richardson said. “… To think that I was coached by (Briann January) a couple of years ago and, now, I just passed her record. It is pretty cool.”

Although Richardson will have her name in the history book, senior forward Tapley will always be linked.

Tapley – who scored on the record-breaking assist – transferred from USC to ASU for her final season, and she speaks glowingly about Richardson as a point guard. Tapley trusts Richardson, saying that she has the “whole package” and that she is easy to play with.

“It was a great feeling just to know that she was able to get that (record), and that I could help and be that person for her connect that assist and get that basket,” Tapley said.

SHE DID IT: Reili Richardson (@reilirich) is the new all-time assist leader for @SunDevilWBB – she earns it with a drop-off assist to Ja’Tavia Tapley (@flick_wrist).

Richardson still has more to write in her legacy, but Sink believes Richardson has the ability to continue her basketball career beyond ASU.

“Reili has had a great college career,” Sink said. “If she continues to grow as an offensive threat, I believe she can play at the next level as a professional.”

Nonetheless, Richardson has blossomed in Tempe.

“I think (I progressed) just into the person that I became,” Richardson said. “I came here and I was very quiet, and I didn’t say a lot of things on and off the court. I think that I have grown not only on the court but also in life and I have really found my voice.”