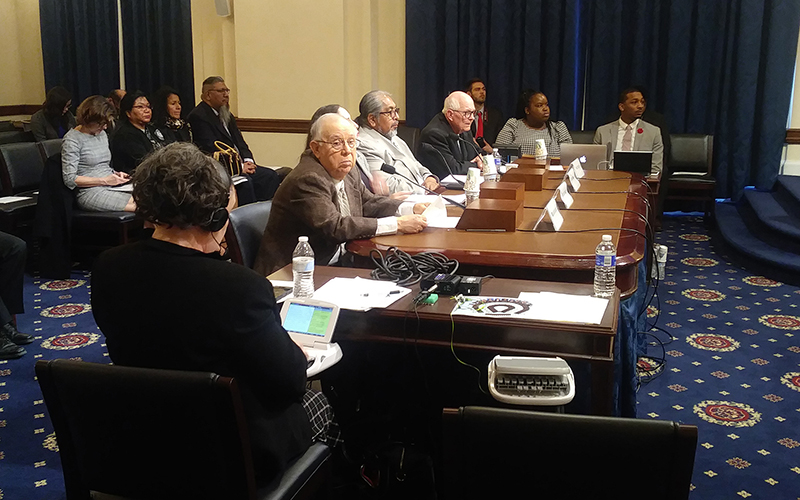 Tohono O’odham Chairman Ned Norris Jr., left center, said construction of the border wall is threatening sacred and environmentally sensitive sites near his reservation, which straddles the U.S.-Mexico border. But Arivaca rancher Jim Chilton, far right, says a wall is needed to protect his family and his ranch from smugglers. (Photo by Joshua Gerard Gargiulo/Cronkite News)

WASHINGTON – Two Arizonans from two points on the border brought two very different ideas about the border wall to a congressional hearing Thursday.

While Tohono O’odham Chairman Ned Norris Jr. repeated his opposition to the wall and the damage it’s causing sacred sites, Arivaca rancher Jim Chilton said the wall is needed to protect his land and his family.

“The 25-mile open gap between the west end of the current wall near Nogales, and the east end of the Buenos Aires National Wildlife Refuge wall is a major route for cartel drugs and people smuggling,” Chilton told a House Homeland Security subcommittee. “Over 200 trails come through our ranch and it is very hard to detect people.”

But Norris, testifying to a House committee for the second time in as many days, said the wall is the wrong solution in the wrong place, splitting his reservation in two and running over culturally and environmentally important sites.

“It is needlessly destructive when there are more efficient technologies that can control the border without damaging the religious, cultural and environmental resources on which our members rely,” Norris said.

They were among four witnesses at the hearing called to examine “the effect of the border wall on private and tribal landowners.”

Rep. Kathleen Rice, D-N.Y., said in an opening statement that two-thirds of the southern border is privately owned. In its rush to build the wall, she said, the Trump administration will use the government power of eminent domain “at a historically high level to strip landowners of their property and, in many cases, cause damage to their livelihoods.”

Nayda Alvarez, who owns property on the border in Roma, Texas, said she has “been intimidated by the government to sign over rights to our land.”

But agency officials are pressing to meet President Donald Trump’s pledge in his State of the Union address this month to have “substantially more than 500 miles” of the border wall completed by early next year. 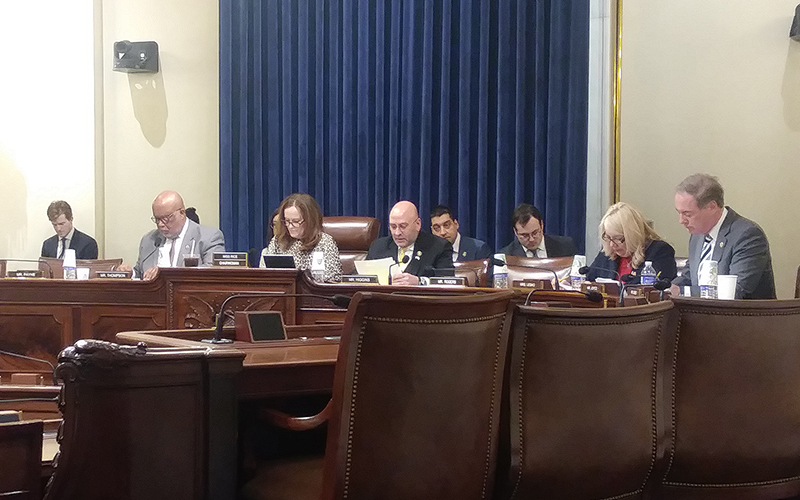 Rep. Kathleen Rice, D-N.Y., center, said that two-thirds of the property on the border is privately owned, and she fears the Trump administration will use eminent domain “at a historically high level to strip landowners of their property..” But Rep. Debbie Lesko, R-Peoria, said that while property needs to be protected, the wall needs to be built. (Photo by Joshua Gerard Gargiulo/Cronkite News)

The Department of Homeland Security has waived environmental and other regulations to speed construction of the wall, including waivers on more than 90 miles of border in Arizona last year alone. DHS also waived contracting regulations last week for border wall projects.

The Congressional Research Service reported in January that the $4.5 billion Congress has appropriated for border wall construction since Trump took office is $2 billion more than the total appropriated from fiscal 2007 to fiscal 2016.

That does not include more than $6 billion the administration shifted from Defense Department construction and counterdrug funds last year, or the $3.8 billion it shifted in from Pentagon projects in February.

Norris testified that construction crews in the Organ Pipe Cactus National Monument are pressing ahead with controlled blasting, often with little or no notice to the Tohono O’odham who consider the land adjoining their reservation as sacred.

Rep. Debbie Lesko, R-Peoria, said after the hearing that it is a challenge to “secure the border but also protect private property and Native American Indian tribe lands.” But the border wall needs to be built, she said.

That was echoed by Chilton, whose testimony included photos of the four-strand barbed-wire fence that serves as a border barrier on his property but that “even an 80-year old rancher can climb under or over.” Chilton, a fifth-generation rancher, also showed video of cartel caravans crossing his ranch.

He said a wall is needed at the border, criticizing Border Patrol’s strategy to “focus on attempts of interdiction 10, 20 and over 100-miles inside the United States rather than the international boundary.”

“The Tucson station Border Patrol, with approximately 650 agents and 27 agents per mile, is located 80 miles from the ranch border,” he said. “Would a football team ever win a game, if on defense the team lined up 10-yards behind the line of scrimmage?”

While Chilton wants more presence at the border, Alvarez said her fence is more often crossed by government agents than by migrants.

“At night, what do I get? I get Border Patrol jumping fences in full gear, with AR-15s, night-vision, walking all over the property,” she said. “So, what do I need a fence for, if I have these people going all over my property protecting me?”