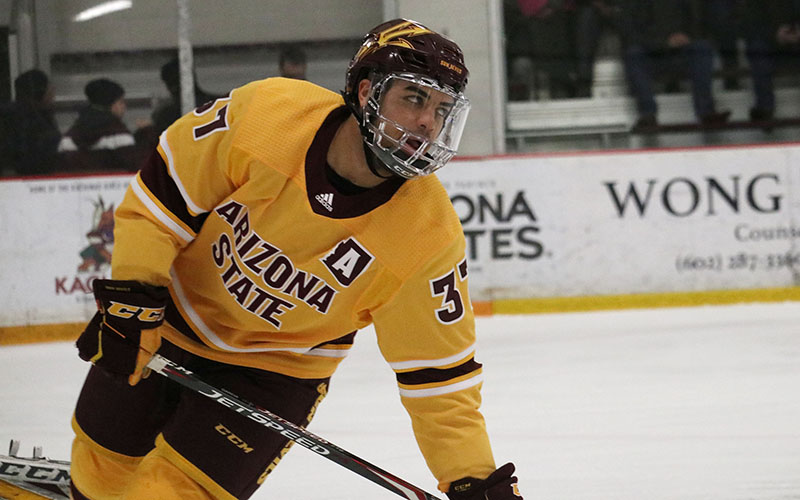 Time spent on the ice can be grueling but so can travel. Junior forward Dominic Garcia said he usually does mobility exercises before flights to make sitting on the plane a little more tolerable. (Photo by Jenna Ortiz/Cronkite Sports)

That’s the fate of Arizona State, which started its schedule with five exhibition games in Beijing, China, and ends it in Madison, Wisconsin, for games today and Saturday before postseason play begins.

Flying might not seem like a big deal but it can impact the health of college athletes who are asked to perform in a different time zone after long hours on cramped flights.

“It does take a toll on your body in terms of getting adjusted,” said Liane Blyn, director of sports performance for ASU Olympic sports. “Physically, traveling across time zones is tough on any athlete.”

Traveling by plane in general is a process. Start with the packing and security checks and the sitting and waiting, and that’s all before getting on the plane. Once aboard, add turbulence and crying children and a lack of proper personal space.

For the ASU men’s hockey team, it’s just another weekend in a season that they spent traveling across multiple time zones to play at schools like Brown University in Providence, Rhode Island, and Clarkson University, which is located in the Upstate New York town of Potsdam, snug against the Canadian border.

Junior forward Dominic Garcia said he usually does mobility exercises with Blyn before flights to make sitting on the plane a little more tolerable. During the flight, he makes sure to stay hydrated and to “eat somewhat healthy.” Garcia indulges in almonds, protein bars provided by Blyn and, of course, pretzels. But no junk food.

Once the players land and eat dinner, they go through a mandatory mobility and stretching session to work out the kinks.

“Things to try and loosen us up, and just so we’re not as tight and as sluggish for the next day for practice, or in some cases, we just have pregame skate,” Garcia said.

Dealing with flights, bus rides and a body clock that’s off kilter isn’t the end of it. Players are students, too, with assignments to complete, papers to write and tests to take. They take homework with them and do it on the plane or whenever they get a chance during the trip.

“Sometimes it feels like your whole time is spent doing homework or studying for an exam,” Garcia said.

Tests can be even more complicated.

“My freshman year, I took one at the University of Nebraska-Omaha’s campus in their student center,” Garcia said. “Sometimes players will go to wherever on the other team’s campus and take their tests there with an actual proctor.”

Meanwhile, the coaches and athletic staff are planning to make the experience as easy and healthful as possible.

For instance, Blyn said it is often more beneficial to the players’ recovery if they are able to sleep in a little more and take a later flight rather than getting up early to make the cross-country trek again.

“I think this year has been more of a struggle …” Garcia said. “So, whether we’re at home or we’re away, we haven’t had a break in it seems like forever.” 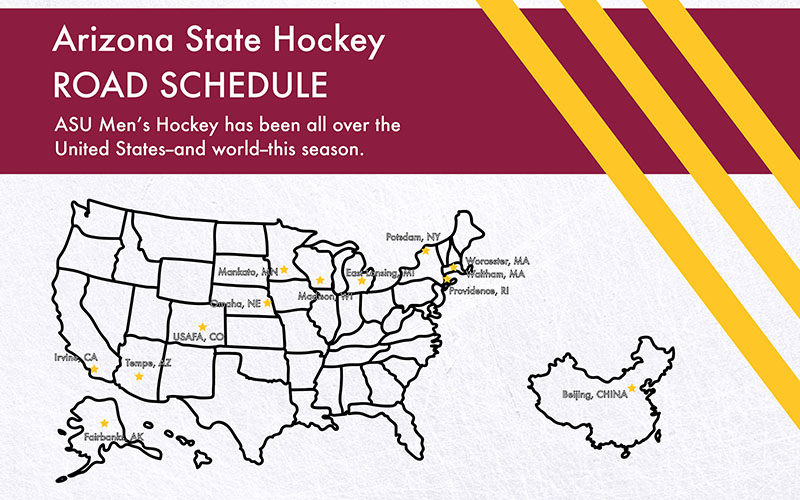 All the traveling brings on mental fatigue along with physical exhaustion, assistant coach Mike Field said, and if he’s tired, he knows his players must really be hitting the wall.

When athletes are fatigued, they might not be willing to add more weight or do one more repetition when lifting, he added.

“But I think our guys are pretty good about pushing through that stuff,” Field said.

It is more important that players are in tune with their bodies and know their own needs because “there’s no one-size-fits-all” when it comes to an athlete’s health, Blyn said.

While many of ASU’s players have experienced heavy travel while competing in junior hockey leagues, it hardly compares to what the Sun Devils face as an independent program located in the Southwest.

“Not like this at all,” Garcia said of the junior hockey travel. “The longest was a 4 1/2-hour drive.”

Surprisingly, the Sun Devils don’t seem to mind sacrificing sleep or going through the airport rigmarole to sit for five hours on a flight because it means playing high-caliber hockey against the best competition.

And ASU has done that well enough to be a consensus Top 10 in the national rankings for the first time in program history.

“I would say, for the most part, myself included, that we all like traveling,” Garcia said. “It’s nice to play in other college arenas and their crowds and things like that.”

The ASU men’s hockey team is on the road for the last time in the regular season with games at the University of Wisconsin Friday and Saturday. 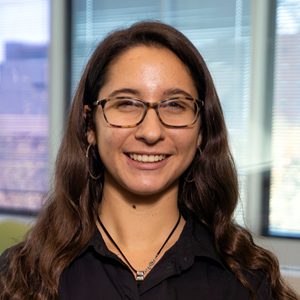