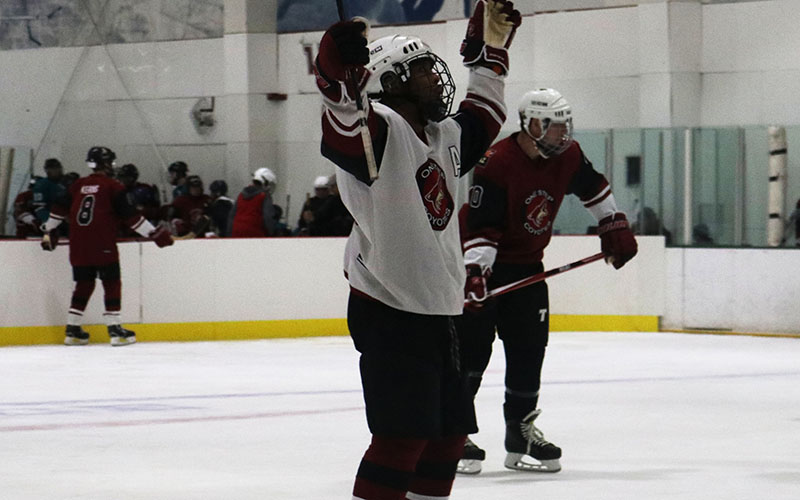 One Step Coyotes center Louis Geddes celebrates after scoring a goal during a game against One Step Shark. Celebrations by the team come in all forms. (Photo by Jenna Ortiz/Cronkite News) 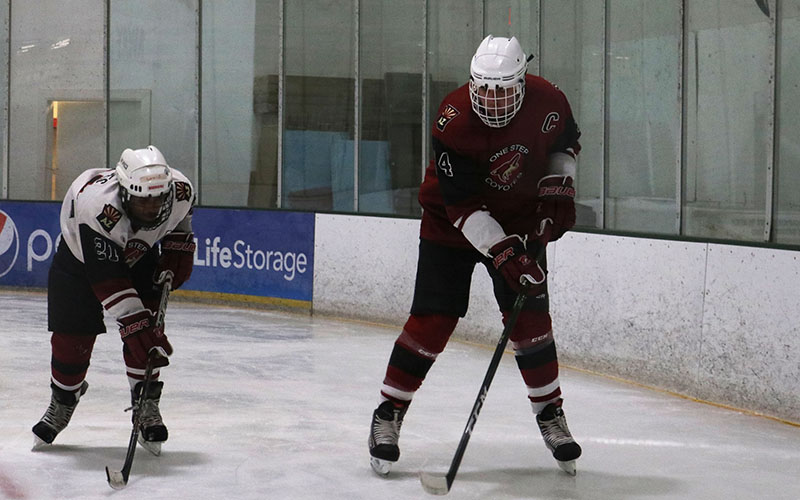 One Step Coyotes captain Nick Borek moves the puck alongside Coyotes center Louis Geddes during a game. They play in a non-check league to help minimize injury. (Photo by Jenna Ortiz/Cronkite News)

That’s what a game with the One Step Coyotes looks like.

The organization, founded in 2016, is Arizona’s first hockey program designed for adults with intellectual disabilities. The team runs under One Step Beyond, Inc.

“It’s real fun, and having fun with your friends is very interesting,” One Step Coyotes center Louis Geddes said. “And different people have different disabilities so you get to learn from them and get to do and teach them more stuff.”

Geddes is now in his second year with the program and loves to “make moves” as a center.

“It makes me happy inside when I see them skate around the rink, feel that cold air, and shoot pucks and pass them and have a good time with the sport,” said Jared Woosley, the program’s founder and coach.

Woosley started the program after not seeing any hockey opportunities for individuals with intellectual disabilities. People with disabilities make up at least 19 percent of the population, according to the National Center on Disability and Journalism. Due to the amount of expensive equipment involved, ice hockey is not a sanctioned sport by the Special Olympics.

Woosley wanted those at One Step Beyond to experience his lifelong love of hockey.
“So many of these hockey players didn’t want to play football or baseball, or dance or theater or do music,” he said. “And when this came up, they gave it a shot, and they found themselves.”

Woosley’s model now has 50 players in the Valley and expanded to San Jose three years ago. Nashville is next on the list.

“So far, the horizon looks really good. We’ve made a couple trips out to Nashville and it’s been a lot of fun,” Woosley said.

The program did come with safety concerns. Hockey’s reputation caused hesitation from some players and their families.

“A lot of people said in my family, ‘Oh, you’re gonna fall down. You’re gonna hurt yourself,’ said Michael Watts, the team’s assistant captain. “But you just gotta remember you’re with pads. You have pads on. You have people to help you out.”

It is a non-check league, and beginners are allowed to use wheelchairs, which offers a solution to most qualms. Players like Watts have graduated from the chairs to skating, a transition that makes Watts feel proud.

“I’m doing better now so I guess it’s just hard work and new skates and stuff like that,” he said.
Watts saved up his money for skates, a sign of dedication for the recent hockey convert.

“It’s always fun to see people who have played that sport, find a new admiration, new love for it,” said Matt Shott, the Amateur Hockey Development Director for the Arizona Coyotes.

Shott’s relationship with Woosley at Polar Ice, now Ice Den Chandler, created the bond between the Coyotes and One Step Beyond.

“I hate bragging about myself. I hate talking about myself,” Shott said. “I don’t get to see the One Step Coyotes as much as I would like to, but whenever I do, I feel like the biggest celebrity in the world because I show up and all the originals (on the team) just blow up.”

Shott’s role with the organization has exposed the team to memorable experiences over the years. In 2017, Shott
arranged for the team to have a special tour of the NHL Centennial Fan Arena. The team enjoyed seeing the Stanley Cup, but that faded away as soon as Shott joined them.

“Not only did these kids turn away from the best trophy of all sports to come say hi to me and hug me and welcome me to their group, I mean that’s always going to stick out to me,” he said.

Shott keeps a framed jersey from the team by his desk as a constant reminder of their impact.
“They treat me like a celebrity, and in actuality, they’re the celebrities.”