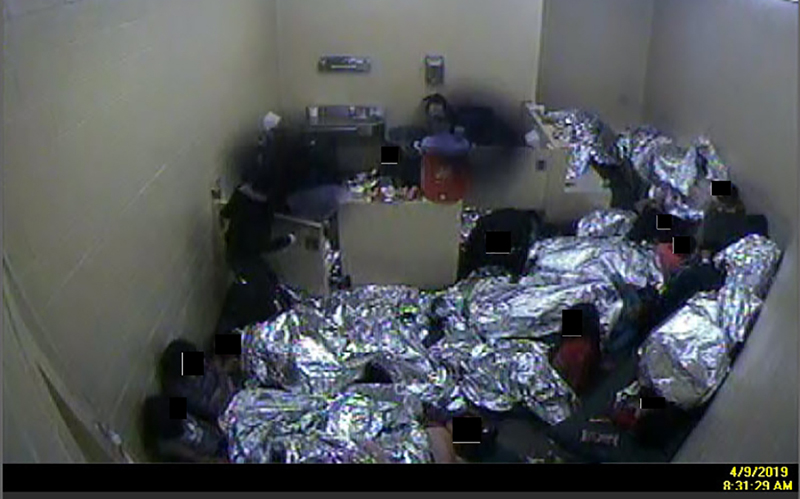 An image from a video camera in a Customs and Border Protection immigrant processing facility in the Tucson-area shows the overcrowding, with detainees forced to wrap themselves in Mylar blankets and sleep on the floor or sitting against a wall. (CBP image courtesy American Immigration Council) 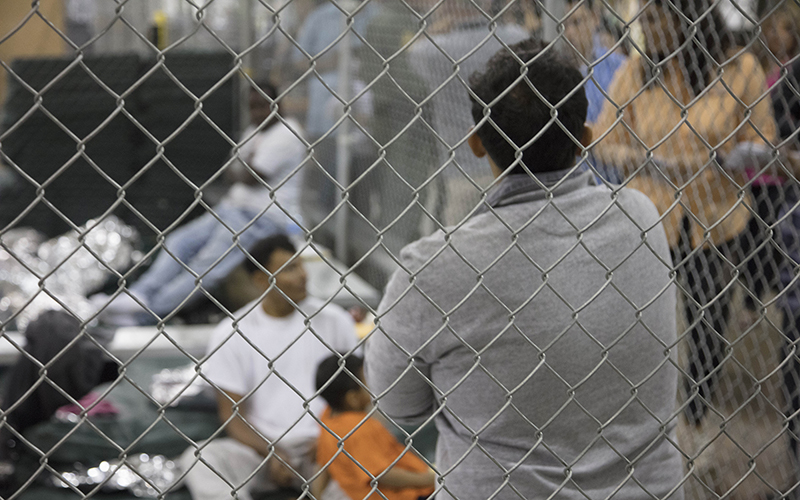 Border Patrol agents process migrants who crossed the border illegally in a facility in McAllen, Texas, in this photo from June 2018. A federal judge recently found overcrowded CBP facilities in the Tucson area have not met “basic human needs.” (Photo by U.S. Customs and Border Protection)

WASHINGTON – A federal judge ruled that Customs and Border Protection cannot hold migrants for more than 48 hours in its Tucson-area facilities, which he said were not designed to meet “basic human needs … for extended periods.”

The ruling Wednesday by U.S. District Judge David Bury found the situation at some of the nine CBP processing facilities in the Tucson sector “offends the notions of common decency,” with overcrowding, a lack of sleeping areas or blankets, a lack of showers and other problems.

Bury’s ruling recognized that CBP has been forced to stretch “existing resources to provide the best conditions of confinement available” in the face of a surge of immigrants and an inability of other federal agencies to take those detainees. Despite that, he said, the conditions at the CBP facilities are “presumptively punitive and violate the Constitution.”

A CBP spokesman said the agency is reviewing the ruling and referred questions about possible next steps to the Justice Department, which did not immediately respond to a request for comment Thursday.

But attorneys for the migrants hailed the decision.

“We’re going to see their treatment improve dramatically from what it is now and what it’s been over the years,” Alvaro Huerta of the National Immigration Law Center said in a conference call Wednesday. “This sets constitutional minimums for the way that people in detention should be treated.”

The law center was one of several groups that filed a class-action the suit five years ago on behalf of detainees held by CBP in its Tucson sector.

“We were hearing these terrible stories about overcrowded centers, about really cold conditions, sleeping on the ground and so we came together and decided to file this lawsuit which at the time, was first of its kind across the nation,” said Marcela Taracena, a spokeswoman for the American Civil Liberties Union of Arizona.

Detainees won an initial victory in 2016, when Bury issued a preliminary injunction that ordered CBP to meet its own standards for short-term detentions and that it provide clean bedding for people held more than 12 hours.

But after a seven-day fact-finding hearing in January, Bury ruled that conditions were “especially harsh and unrelated to the purpose of their confinement.” He said the migrant detainees faced worse conditions that inmates being held in regular jails on criminal charges.

Aerial view of a temporary CBP facility in Yuma, erected last year to process migrants who are apprehended, or turn themselves in, at the border. A federal judge this week found conditions at CBP facilities in the Tucson sector violate constitutional protections. (Photo by Jerry Glaser/U.S. Customs and Border Protection)

“The evidence is undisputed that conditions … at Tucson Sector CBP stations are substantially worse than conditions afforded criminal detainees at the Santa Cruz County jail or other jail facilities,” Bury wrote. In jails, inmates were likely to get a medical screening, a bed and adequate sleeping conditions, shower, toothbrushes and food that includes fruits and vegetables as well as religious and dietary options.

Court documents, surveillance photos and witness testimony showed that since at least 2014, migrants have been kept for days in cells only meant to hold individuals for 12 to 24 hours, in facilities that had difficulty providing basic hygiene items and medical care.

Documents also reported facilities so overcrowded that migrants, including children and mothers, were forced to sleep sitting up or on the floor or in toilet stalls “for lack of space,” with the lights on 24 hours a day.

Those conditions were described Wednesday by a former detainee and witness in the case, who was on the conference call with Huerta.

“When I was in detention, almost all of the children were sick and the air was so cold,” said the witness, whose name was not given on the call.

“When we asked them to turn the cold air down they said they had to keep it cold because they were trying to kill the virus that was getting everyone sick,” she said through a translator. “We’re not asking for luxury but it was really uncomfortable.”

Bury said the problems stem from the fact that CBP is only supposed to process immigrants and turn them over to other federal agencies for detention. But those agencies often fail to “green-light” the transfer of migrants, which “forces CBP to step into the ill-fitting shoes of a detention facility and perform the detention responsibilities” of agencies like Immigration and Customs Enforcement, he wrote.

Bury said there is no governmental justification for CBP to hold migrants that long. His order said CBP, with a few exceptions, cannot hold a migrant more than 48 hours after they have been processed for transfer to another agency, unless it can also provide conditions “that meet basic human needs for sleeping in a bed with a blanket, a shower, food that meets acceptable dietary standards, potable water and medical assessments performed by a medical professional.”

Taracena called the ruling a “big victory, but it’s not over and we’re going to continue to remain vigilant that CBP is held accountable.”