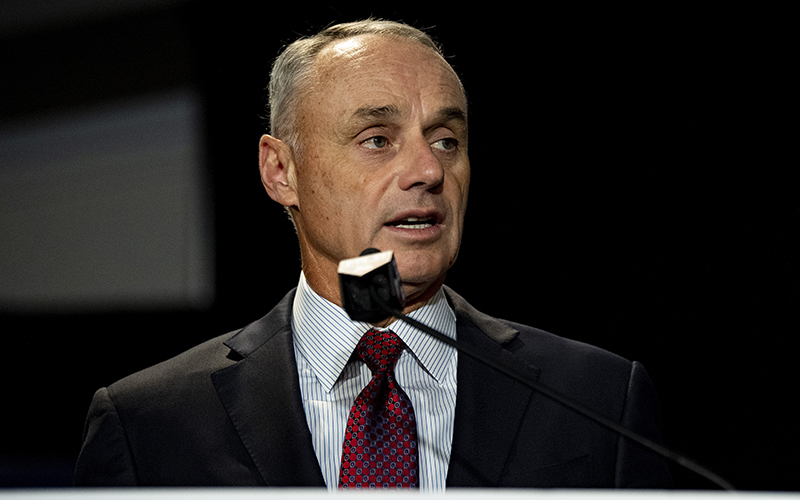 MLB Commissioner Rob Manfred believes part of the reason there is such a large outcry to the Houston Astros’ sign-stealing scandal is because “society has evolved.” (Photo by Billie Weiss/Boston Red Sox/Getty Images)

SCOTTSDALE – Less than an hour before MLB Commissioner Rob Manfred took the microphone Tuesday and addressed the Houston Astros’ sign-stealing scandal, four-time NBA MVP LeBron James tweeted his displeasure on the subject, saying if it happened in his league, his emotions would be “irate” and “uncontrollable.”

Listen I know I don’t play baseball but I am in Sports and I know if someone cheated me out of winning the title and I found out about it I would be F*^king irate! I mean like uncontrollable about what I would/could do! Listen here baseball commissioner listen to your…..

The moment symbolized the enormity of the story, one that has ignited the largest outrage of any baseball scandal in recent years. Much of this can be attributed to how today’s world has become more advanced, Manfred said.

“I think part of it is the way society has evolved,” Manfred said when asked to compare it to the Black Sox scandal. “It’s a very different world than 1919.”

As a result of MLB’s findings, the Astros gave up their first- and second-round picks for 2020 and 2021, and surrendered $5 million. Additionally, general manager Jeff Luhnow and manager A.J. Hinch both lost their jobs. But Manfred didn’t directly punish any of the players who participated in the cheating.

Reaction to Manfred’s decision was strong.

“It affected who won the World Series,” said Los Angeles Dodgers manager Dave Roberts, who lost the 2017 World Series to the Astros. “Sports fans look at moments. They look at past champions. And for that to kind of be affected in any capacity, there’s certainly going to be a tension drawn to it.”

Don’t be mistaken: This is far from the sport’s first wrongdoing.

In 1919, some members of the Chicago White Sox, later nicknamed the “Black Sox,” fixed the World Series, intentionally losing for a cash payout. And there’s an entire span of more than a decade (from the 1990s to early 2000s) dubbed “the steroid era” for its players’ widespread use of performance-enhancing drugs.

But the outcry of the sign-stealing scandal seems to surpass others in terms of the general public’s concern with the issue.

“The burn on stories is so much faster, in terms of the cycle of information and how things get out,” said Shawn Klein, a philosophy professor at Arizona State University who calls himself the Sports Ethicist. “Things get reported and get out there to the social media sphere and get passed around and become memes and become jokes.

“People lose perspective because they’re on social media instead of in person, so things move a lot faster. That’s, to some extent, social media just turning up the heat and moving the process that faster.”

Chicago White Sox manager Rick Renteria added, “With the way technology is today, everybody is able to transmit more information. And now you have instant information being sent beamed out, so maybe that’s played a part in why it’s been exposed to such a high degree.”

The 2017 World Series drew an average of 18.9 million viewers on the FOX broadcast. This made it the third-most-watched World Series since 2005, Awful Announcing reported.

This high viewership figure could be another factor in the public’s interest in the scandal – at least Chicago Cubs manager David Ross thinks so.

“I think just the media attention that we have in today’s game,” Ross said. “When something of this magnitude, especially when it affects a championship, it carries a lot more weight and people are a lot more in tune to it.”

The attention to the storyline is understandable – athletes, politicians and celebrities have all shared their opinions on this scandal. But some argue that baseball’s other scandals may have received as much outcry had they occurred in an era when social media and other technologies existed.

“I’m guessing if you went back to the Black Sox, there wasn’t social media then,” Cleveland Indians manager Terry Francona said. “There’s a lot more outlets to vent, whether it’s frustrations or opinions.”

Although Klein understands the notoriety of the Astros’ violations, he cites government intervention when comparing them to the steroid era.

“You had congressional hearings and players being brought forward to testify in front of Congress,” Klein said. “That was a pretty big deal. I’m not sure the response is that much bigger.”

Whether sign stealing has garnered the most negative reaction of all time doesn’t really matter. It has become a public issue that has attracted wide-ranging reactions, from players to even non-sports fans. 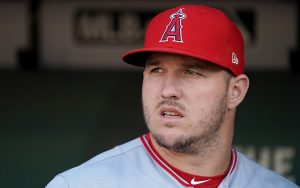 One of the game’s biggest stars, Mike Trout, doesn’t say much very often. But the soft-spoken Los Angeles Angels outfielder didn’t hold back when asked about the Astros’ scandal.

“I lost respect for some guys,” Trout told reporters Monday at Tempe Diablo Stadium. “I don’t agree with the punishments, the players not getting anything.”

Many people say they have lost trust in the Astros and, subsequently, Major League Baseball. Unlike other past scandals throughout baseball’s history, Francona doesn’t see future generations sentimentalizing about this incident.

“I don’t think someday you’re going to hear people romanticizing it,” Francona said. “That’s probably the difference. This seems like it kind of crossed a line a little bit.”

The severity of the Astros’ sanctions has resulted in a gnarly black eye. Manfred knows it’s up to him to stop the bruising.

“I do think that on a go-forward basis that it’s important for us to establish player accountability on these issues,” Manfred said. “The agreement I made, I intend to live up to. Whether there’s going to be immunity in cases going forward, given the player reaction to this issue, I think that I would have to think long and hard about that.”