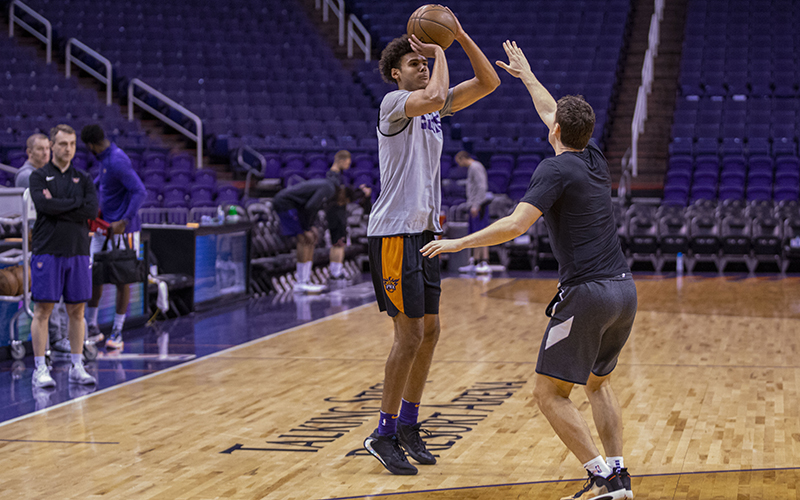 Cameron Johnson is not only impressing his teammates with his stingy defense. He has their attention because of his sharp-shooting skills, too. (Photo by Travis Whittaker/Cronkite News)

PHOENIX – Cameron Johnson dribbled to his right, past Anthony Davis, and dashed into the lane. Between the Phoenix Suns rookie and the rim, JaVale McGee, the 7-foot Los Angeles Lakers center, slid into position to challenge him.

With the towering McGee in his way, the 6-foot-8 Johnson soared to the hoop and converted in stunning fashion, slamming a one-handed jam over McGee’s 7-foot-6 wingspan while also drawing a foul.

“I had a little seam, and I tried to take advantage of it,” Johnson said later. “I knew I had it.”

Unlike other NBA rookies who might have danced or trash-talked, Johnson simply high-fived teammates and went to the free-throw line.

“They were (hyping me up),” Johnson said. “But I don’t react too strongly to those things, but kind of just said, ‘OK, next play.'”

You would not have known it from his calm demeanor, but that dunk equated to the first points of Johnson’s NBA career as a starter. He replaced Kelly Oubre Jr. in the lineup against the Lakers on Feb. 10 when Oubre reportedly was late for a team bus. Johnson finished the 125-100 loss with eight points, four assists and three steals.

Despite losing by double digits, Johnson treasured his first time starting at the professional level.

“It’s exciting,” Johnson said. “Any time you get to play on the court with my teammates, I love it. I cherished the opportunity, and it means a little more.”

Although Johnson did start until Feb. 10, he still has seen significant minutes in his first professional season. A North Carolina product, Johnson is averaging 7.7 points and 2.9 rebounds on 19.8 minutes per game.

Since first arriving in the Valley, Johnson’s teammates have seen his value as a stingy defender and sharp-shooting forward. This led to ample playing time and touches in the early season.

“With Cam, it’s high-level shooting,” Suns guard Devin Booker said. “To adjust that quickly and be known as a shooter on the other team’s scouting report this early in your career shows you the endless potential he has.”

His rookie season, however, encountered a speed bump in mid-January. Johnson suffered a contusion of the quadriceps in his right thigh, forcing him to miss three weeks.

During that hiatus, Johnson, who was the 11th pick in the 2019 draft, didn’t just sit and wait to heal. Instead, he honed in on one of his biggest strengths.

“A lot of form shooting, a lot of reps,” Johnson said. “I was shooting the whole time while I was hurt.”

Johnson has played three games since returning from the injury and was regaining his form as the Suns entered the All-Star break.

“I’m definitely getting more comfortable out there,” Johnson said. “At first, it seems like everything’s moving so fast, but it’s starting to slow down.”

Through just 42 career games, it’s hard to assess Johnson’s true potential. But Suns coach Monty Williams saw enough out of Johnson’s first start to believe he’s going to be a force in the league for years. Specifically, he appreciated Johnson’s drive and finish over a 7-footer, which demonstrated Johnson’s relentless mentality.

“Cam did some really good things,” Williams said. “The dunk that he had was a huge marker for me because it gave me confidence that he’s going to go to the basket with some purpose and he’s not afraid. There was no intimidation at all.”