Two weeks after he nearly was released, Danny Marshall is starting in center for ASU 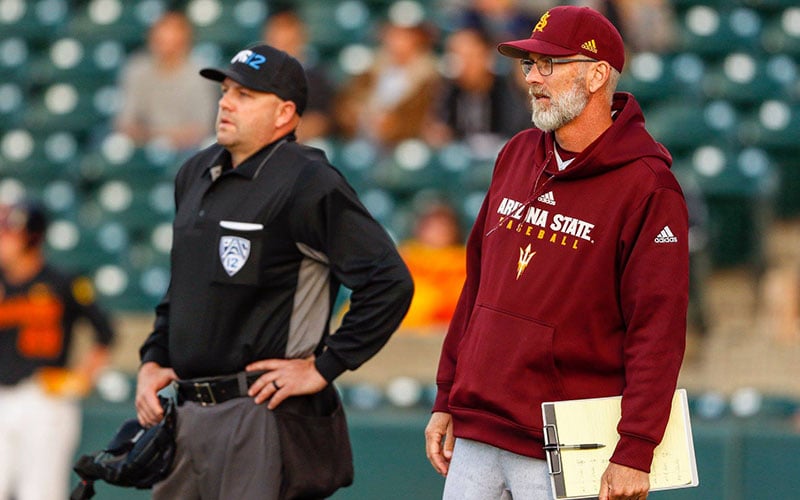 Just two weeks ago, coach Tracy Smith was ready to release freshman Danny Marshall “because the pitching wasn’t working out.” Now, Marshall will roam center field for the team he dreamed of playing for in college. (Photo by Brady Klain/Cronkite News)

TEMPE – When Danny Marshall arrived last fall as a walk-on pitcher for the No. 3 ASU baseball team, the former Queen Creek High standout, who also played the outfield in high school, never imagined he would get his first crack at playing time in center field.

But with hand injuries to starting center fielder Sean McLain and sophomore outfielder Dusty Garcia, coach Tracy Smith knew who would ask to step into the starting lineup.

“For us, in terms of attributes of who plays center the best, you have got to have a guy who looks comfortable chasing the ball down,” Smith said. “We aren’t so much concerned with the offensive piece of that position because we feel like ‘Who’s going to play the best defense for us right now?’ So, believe it or not, it’s him.” 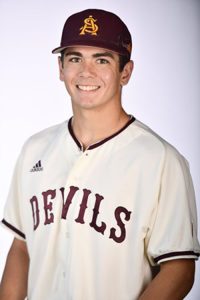 Starting for the Sun Devils is a dream come true for Danny Marshall, but he thought it would be on the mound. (Photo courtesy ASU Athletics)

Just two weeks ago Marshall’s future with the team was uncertain.

“We were calling him into my office to release him because the pitching wasn’t working out,” Smith said. ‘But (assistant coach) Michael Earley said ‘Why not keep him around?’

The soft-spoken Marshall was humble about his situation. He said that if somebody had told him three weeks ago he’d be starting the season-opening game, he wouldn’t have believed it.

“I’d say you were crazy,” he said. “It feels good. I’ve been working pretty hard, and the opportunity came for me to play center field and I did what I could out there (in practice). And I guess I did pretty good.

“I’m feeling very comfortable (with it). I was a little rusty at first, but I got back in the groove of things after a couple of days.”

Marshall played center field at Queen Creek High and batted .339 while compiling a 3.29 ERA on the mound his senior season. None of that matters much to Smith. He just wants to see Marshall make plays in the field.

“Just go all-out every time,” Marshall said, “try and catch the ball and help your pitchers out, help them get outs to win the game.”

Marshall will have junior Trevour Hauver and senior Myles Denson flanking him in the outfield, both veterans who can provide guidance.

“They’ve helped me a lot, transitioning, getting good reads, good routes on the ball, just getting back in the groove of things,” Marshall said.

The start is a dream come true for Marshall. An Arizona native, he attended ASU games at Packard Stadium where he hung out and played catch on the grass with his friends. He always had the goal of suiting up in a Sun Devils uniform.

Now he gets to live out that dream at Phoenix Municipal Stadium Friday as the No. 3 Sun Devils open against Villanova at 6:30 p.m.

Just maybe not at the position he expected.