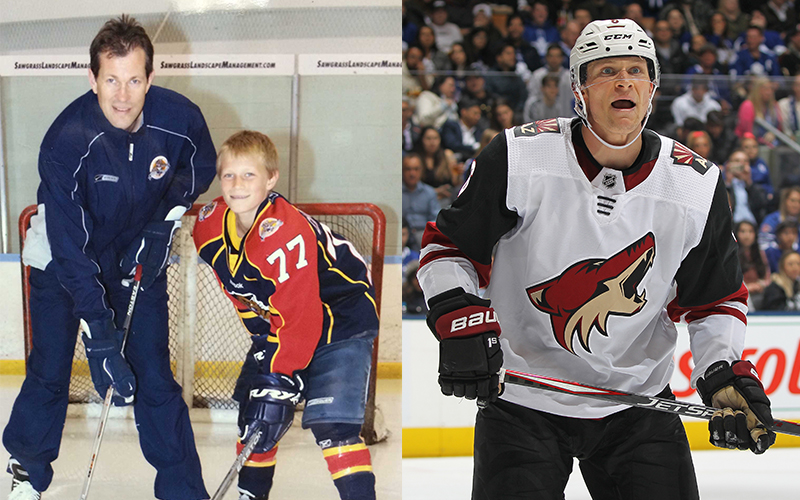 Jeff Chychrun (left) coached his son Jakob, 10, while he played for the Florida Jr. Panthers. Jakob Chychrun is now an accomplished defenseman with the Coyotes. (Photos courtesy of Jeff Chychrun and by Claus Andersen/Getty Images).

Jakob, then 3, emerged from a skate with Florida Panthers mascot, Stanley C. Panther, sweating in his gear.

“He looks up at me with the big blue eyes, ‘Daddy, I’m all wet. I need a bath,’” said Jeff Chychrun, a former defenseman who played eight seasons in the NHL.

Jakob began playing hockey when he was around 2. He would grab wooden spoons and hit balls around the house, but didn’t grasp that his dad played the game professionally years until later.

Many children of NHL players don’t realize what their dads do for a living until they’re older. Although players like Coyotes winger Michael Grabner don’t explain their job to their kids, their children still know their careers are different. The three month vacation, fans stopping for pictures, moving around the country – all have an impact on family life.

Chychrun never had to leave Jakob behind because his career ended years before he was born. But Coyotes coach Rick Tocchet had to leave his young son Trevor in Pittsburgh when he landed coaching jobs after retiring as a player.

“It was a little tough for him because I’d be coming and going a lot of the time,” Tocchet said. “He loved the game of hockey, dealt (with it), and came to games when he could when it didn’t interfere with school.”

Trevor, now 20, has enjoyed highlights from his dad’s coaching career like hoisting the Stanley Cup with him in 2017 when Tocchet was an assistant coach with the Pittsburgh Penguins.

“I enjoyed that more that he was able to enjoy it, too,” Rick said.

“It’s been great, just kind of seeing how he didn’t see me as a player, but saw me as a coach.”

Tocchet believes his son started to piece together his playing career around age 10 or 11, from reading about his dad on the Internet and meeting friends like Wayne Gretzky and Mario Lemieux.

“He’s been in their presence, whether it’s socially or just at the game,” Tocchet said. “He got to be able to speak to those types of guys.”

Grabner’s children see it as an everyday thing whenever they visit their dad and his teammates.

“They think that’s my friends,” Grabner said. “It’s not like a job or whatever. They think it’s what I do. It’s like what they do when they go hang out with their friends.”

Grabner’s son, Aidan, 8, is one of the few kids on the team who understands the concept of his father’s job, but he isn’t the one sharing with his friends.

“Some kids will talk to him about it if there was like a game or we won or whatever it may be,” Grabner said. “They talk to him, but I don’t think he goes to people. He plays hockey himself; for him it’s just my job and what I do.”

His 4-year-old daughter, Olivia, however, thinks her dad is only playing for fun like her brother.

“I don’t think they understand that this is my job,” Grabner said, “because my 4-year-old always asks me why I have to go play hockey.”

He said she has picked up on clues like whenever he puts on a suit for a game or packs his bag for a road trip. But when fans ask for pictures?

“They just think it’s funny that people want to take a picture or sign something,” he said. “They never really asked much. For them, they just grew up around it.

“I think they will appreciate it later on.”

Some NHL players are lucky enough to see their kids follow their footsteps into the NHL. For Chychrun, this “blessing” has brought on new challenges he didn’t know existed.

“I thought I was a little more trained at that, but boy, those parental emotions take over.”

Chychrun’s new role as an analyst for the Florida Panthers has challenged his professionalism already. When the Coyotes played the Panthers in January, he found it difficult to watch the entire game because he normally focused on his son’s play.

He already heard jeers from the Panthers players in the morning about who he was cheering for that game.

“I told them, ‘Well, I’m kind of like that guy that’s coaching in minor hockey against his friend’s son’s team,’ and I said, ‘That’s kind of like, Well, yeah I hope your son gets three goals, but we win 4-3.’”

The Coyotes won that game, 5-2, and Chychrun finished with two shots on goal, something Jeff said he will cherish forever. “How many dads get to do something like that?”