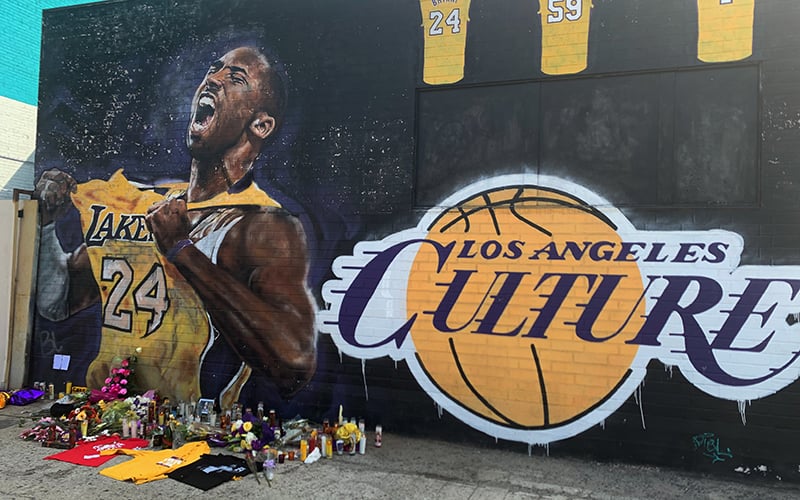 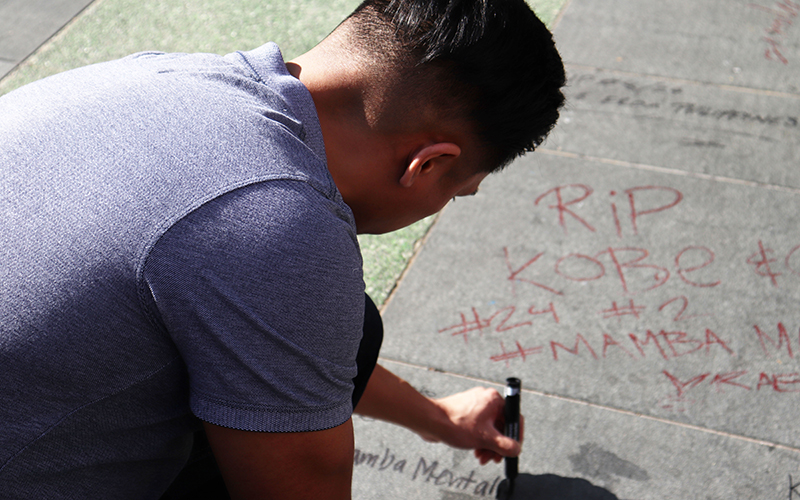 Fans wrote notes on the pavement in tribute to former Laker Kobe Bryant on Jan. 27 in Los Angeles outside the Staples Center. (Photo by Valerie Gonzales/Cronkite News) 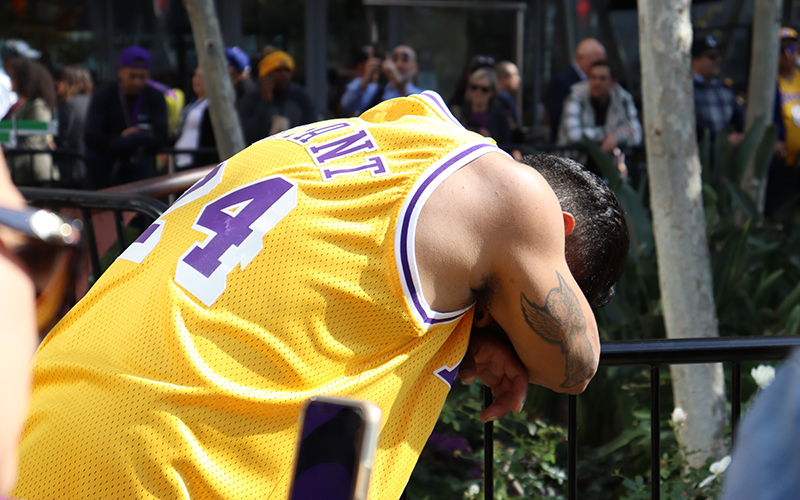 Fan is overcome by emotion at the tribute for Kobe on Jan. 27 in Los Angeles outside the Staples Center. (Photo by Valerie Gonzales/Cronkite News)

LOS ANGELES – Kobe Bryant was only 18 when he joined the Los Angeles Lakers, and the winner of five championship rings inspired a generation of young NBA basketball players to mirror the way he played the game.

“Before I even knew him personally, he had shaped my life,” Phoenix Suns shooting guard Devin Booker, who was 19 when he was the 13th pick overall in the 2015 NBA draft, recently told reporters. “My basketball career. My approach to everything.

“The biggest thing for me was earning his respect. To even be the guy in the room after we play them that he wanted to talk to or share advice with. Then our relationship grew from there.”

One thing Booker will never forget is when Bryant autographed his basketball shoes and wrote “Be Legendary” on them. That was in April 2016, after Bryant’s final game against the Suns.

Booker turned pro, after attending University of Kentucky for a year under the “one and done rule” that mandated young players spend one year out of high school before they can enter the NBA draft. One and done is a reference to how long athletes spent in college. The rule may be dropped to allow players to be drafted out of high school by the 2022 draft, according to NBA Commissioner Adam Silver.

The 2006 rule was intended to give young adults time to mature and improve their chances of success before entering the NBA.

I’m Not Ready but here I go. Man I sitting here trying to write something for this post but every time I try I begin crying again just thinking about you, niece Gigi and the friendship/bond/brotherhood we had! I literally just heard your voice Sunday morning before I left Philly to head back to LA. Didn’t think for one bit in a million years that would be the last conversation we’d have. WTF!! I’m heartbroken and devastated my brother!! 😢😢😢😢💔. Man I love you big bro. My heart goes to Vanessa and the kids. I promise you I’ll continue your legacy man! You mean so much to us all here especially #LakerNation💜💛 and it’s my responsibility to put this shit on my back and keep it going!! Please give me the strength from the heavens above and watch over me! I got US here! There’s so much more I want to say but just can’t right now because I can’t get through it! Until we meet again my brother!! #Mamba4Life❤️🙏🏾 #Gigi4Life❤️🙏🏾

Bryant was drafted in 1996, played his entire career with the Lakers, was an All Star 18 times, on the All-NBA Team 15 times, on the All-Defensive Team 12 times and was named Most Valuable Player in 2008. On court, he called himself Black Mamba.

Even though Bryant was young, he was one of the few to make the most of his talents, Merkow said.

“I think he just kept his head down to a degree and worked to be the best,” he said.

At the beginning of his career, Bryant didn’t have to face certain obstacles that other athletes deal with now, such as social media, said Ed Olsen, who teaches sports marketing at a Arizona State University.

“The new world we live in today where your actions are more open to the world and people can see and know what you do, even if it’s not the most awesome thing,” he said.

Although trash talking is common on the court, when it comes to social media, certain issues arise.

On June 11th, 2018, fans were entertained when Lakers Lonzo Ball and Kyle Kuzma went back and forth on social media platforms as a joke – until Lakers management had to step in when Ball’s diss track made a reference to Kumza’s relationship with his father.

“I think the majority of folks use their social media platforms for positive. You get those authentic moments where guys are human,” Keyon Dooling, a retired NBA player and now the player wellness counselor of the National Basketball Players Association, told Bleacher Report.

Damn I’ve been messed up all day…….I grew up trying to be like you. I would watch YouTube highlights as a kid trying to mimic you (and I still do) I would go to the gym as a kid and shoot fade-aways for hours acting as if every shot I took was at the buzzer just like you. Then 3 years ago I became a laker. You became family & a mentor to me. As a young kid I would of done anything in the world to meet you and as a rookie I had my opportunity. A dinner. A dinner with my idol Kobe Bryant. Talking about basketball, life and business with you at that moment changed my life forever man. I’m teared up just trying to write this but Kobe thank you for being a brother to me. Anything I ever needed from you, was just a call away. Thank you for all the knowledge. Thank you for just being a friend. Your inner drive is something that will never be match. Heroes come and go but you my guy will truly last forever. OUT.

Young Kuzma wanted nothing more but to meet Kobe, and then three years ago Kuzma became a Laker and those dreams came true.

Before Bryant, his daughter Gianna and seven others died in a helicopter crash on Jan. 26 , the former Laker was becoming an ambassador for young, talented athletes.

In 2016, he started the Mamba Academy, which Gianna, 13, was a part of. The academy brings experts in each sport to train the youth, amateur or elite athletes. He also endorsed ESPN’s Don’t Retire, Kid campaign, which is meant to encourage youngsters to keep participating in their sports and not to give up.

“Kobe was going to be a very strong youth sports advocate because you see him with his daughters and his understanding of what it takes to become an athlete on all levels,” said Merkow.

“Just figuring out what type of person he was outside of the Mamba mentality. How he raised his daughters and how much of a family man he was something that was just incredible,” he said.

Booker last saw Bryant when the legend brought Gianna’s AAU team to Phoenix for the Arizona Girls Report Desert Invitational in May.