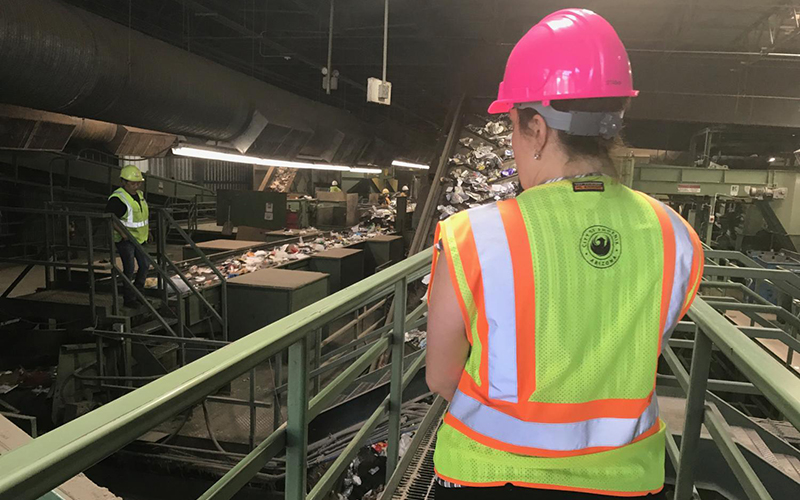 The City Council voted 7-2 to raise the solid waste residential rate by $6.40 over the next two years. The increase is meant to maintain the city’s current recycling and composting services. (Photo by Heather van Blokland/KJZZ)

PHOENIX — The City Council voted Tuesday to increase the solid waste residential rate by $6.40 a month, which is to be phased in over the next two years.

The measure comes two years after China made significant cuts to how much recycled plastic, fiber and other waste it would accept, costing Phoenix multimillion dollar profits from solid waste.

The council’s 7-2 vote maintained the city’s current recycling and composting services by increasing the residential rate to $33.20. It was the first rate hike of its kind since 2009. Councilmen Sal DiCiccio and Jim Waring voted no.

“This vote is an investment in our city’s future and an endowment toward sustainability for generations of Phoenicians to come,” Mayor Kate Gallego said in an email later. “It was time for Phoenix to re-examine the future of our trash collection services.”

The decision came after the council weighed four options regarding the future of Phoenix’s waste services. The other options proposed changing curbside recycling collections to every other week, terminating operations at the Phoenix composting facility for all customers, or suspending the recycling and compost programs.

Before the vote, representatives from the Phoenix Public Works Department made a presentation in support of the $6.40 a month rate hike, which they said the majority of residents wanted.

They said the department held 51 community meetings over the past three months to get an understanding on where residents stood on the proposed possible increases.

According to the online surveys conducted by the Public Works Department, 58% of respondents prefered to keep all services, despite the rate increase.

“If (Public Works drivers) don’t get the increase over the next two years … we’re going to lose 90 drivers,” Phoenix Public Works driver Robert Reidenbach said ahead of the vote. “We’re trying to keep 100 people from having to tell their families they don’t have a job.”

But since January 2018, China has significantly reduced the amount of waste it accepts because too much of it was contaminated with food and other nonrecyclable materials, dropping Phoenix’s total profit on recycled waste to $3 million in 2019.

Phoenix isn’t the only city that’s had to reevaluate recycling in the wake of China’s decision to scale back on solid waste purchases. Mesa reduced what it recycles because of the rising costs, Surprise suspended its program last August because of contamination and Tucson has reduced its recycling efforts.

Giudice said the rate increase “opens up a lot of opportunities for us to continue to be that city that people really want to continue to move to as they love living, working and playing in Phoenix.”