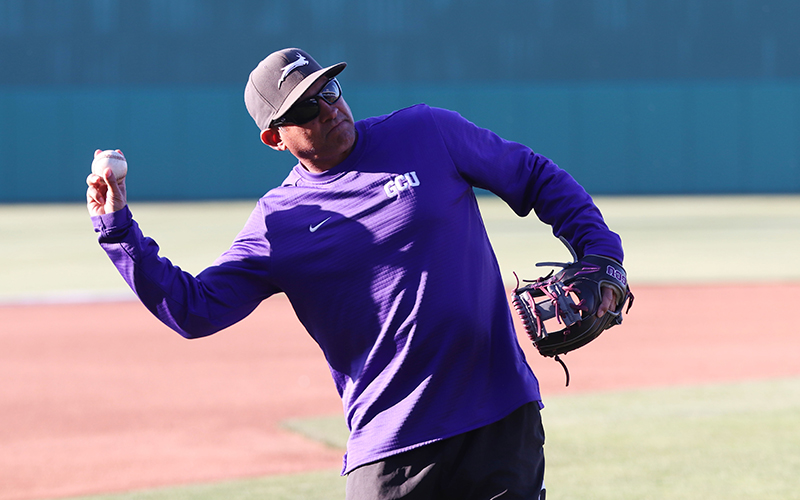 Grand Canyon coach Andy Stankiewicz loosens his arm before a Feb. 7 practice. Stankiewicz is entering his ninth season at the helm of the program. (Photo by Griffin Fabits/Cronkite News)

PHOENIX – Andy Stankiewicz ticked off the list of talented pitchers he’ll have on his roster in 2020, the guys he’ll lean on to take Grand Canyon to its first NCAA Division I Baseball Tournament.

“Kade Mechals, Pierson Ohl, Jack Schneider, Dawson McCarville, Cal Lambert,” he said, pausing and pondering before even more names came to mind during a recent interview in his office at Grand Canyon.

“Then we return most of our relievers from last year’s team,” he said. “And if we’re doing it right, we’re hoping they’re better than they were (last year).”

The Antelopes have won 29 games or more in six of their last seven seasons. They nearly won the Western Athletic Conference Tournament last summer, but fell in the championship round.

And they’re returning a good chunk of their talent in 2020 – mostly pitchers – to put the program in prime position to qualify for its first Division I postseason tournament.

“You feel like guys are starting to understand that emotion of that tournament,” Stankiewicz said. “We feel like every year you get in it, you get better in it. And at some point, hopefully we feel like we’re going to be able to win that tournament on a regular basis.”

Grand Canyon has inched closer and closer to an elite level since joining Division I in 2014. The school had to serve a four-year probationary period in Division I before it could qualify for postseason play.

But it has had its chances to reach the NCAA tournament since the Antelopes became eligible in 2018.

The Lopes were the No. 1 seed in the WAC tournament in their first year. They were so giddy at the thought of being in the tournament with their sights glued on getting to NCAA Regionals, Stankiewicz believes, that it led to a first-round elimination.

Last summer, they conjured up just enough postseason magic to reach the championship round, but Sacramento State eliminated them in back-to-back one-run losses.

Stankiewicz has a feeling the third go-around could be a lucky charm for his program.

“I think the first year, we were too excited, amped up about getting in it,” he said. “Last year we were right there, but we got beat by a team that got us twice, to their credit.”

Grand Canyon was tabbed as the favorite to win the WAC title this spring. Stankiewicz and his team may chalk it up as outside noise, but there is no doubt the Lopes are expected to trot out a solid club in 2020.

“We don’t put a whole lot of stock in (preseason projections). They do it, and it is what it is,” Stankiewicz said with a sly smile, “but I guess it’s better to be picked No. 1 than last. We’ll go that route.”

The Lopes begin regular season play at home Friday when they host Oklahoma State. All Stankiewicz can do now is speculate, playing with different lineups and rotations, toying with what might work and scrapping what might not.

“These interviews can be a little difficult because nothing’s happened,” he said. “When the bullets start flying, that’s when you can see what’s happening.”

But he knows what he can build upon, and that’s the load of pitching.

Of the nine pitchers who logged more than 33 innings of work last spring, eight return this year.

“We’re knocking at the door (of the national tournament),” Mechals said. “Last year, we’re in the conference tournament finals. I think this year, we’re going to take that next step.” 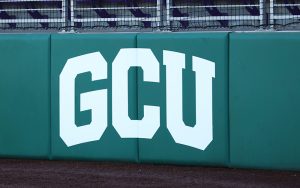 Grand Canyon University has won more than 29 games in six of its last seven seasons. The Lopes begin regular season play on Feb. 14 at home versus Oklahoma State. (Photo by Griffin Fabits/Cronkite News)

It is behind that pitching where Stankiewicz will have to get creative.

“The flip-side of that coin, we lost six of our everyday position players,” he said.

Four graduated, and two were juniors selected in the MLB Draft.

A batting order that ripped 148 doubles before the NCAA tournament – second best in the nation – and that had three players slam 10 or more home runs, is suddenly bare.

It leaves Stankiewicz with more questions than answers about his lineup as the home opener approaches. He can pencil redshirt junior Cuba Bess, a slugger who led the Lopes with a .341 batting average last season, into his everyday lineup.

“But after that, it’s still unknown,” Stankiewicz said.

Stankiewicz will have to develop some bats on the fly this year, but he’s excelled at grooming players to take that next step. Since taking the reins at Grand Canyon in 2012, 17 players of his players have been selected in the MLB First Year Player Draft, according to GCULopes.com.

Stankiewicz is a baseball-lifer. He’s had past stops with the Seattle Mariners, the Arizona State baseball program, the New York Yankees and Team USA. He was drafted by the Yankees in 1986, and spent parts of seven seasons in the majors.

At GCU, he is working to build a culture and a family-oriented program topped by winning baseball games. Lots of them.

He takes pride in seeing past Grand Canyon players, who are now in the pro-ball ranks, spending their off-seasons working out at Brazell Field at GCU Ballpark.

That’s when he knows he’s done his job.

“These young men are an extension of my family,” he said. “These young men become my kids, too. That’s what it’s about for me. I want our guys to have an unbelievable experience here. I want them to love it and to want to come back. And, so far, they’ve been coming back. So, that’s a good thing.”