Arizona State coach Charli Turner Thorne is one of only 81 coaches who have reached or exceeded the 500-win plateau in Division I women’s college basketball. (Photo by Brady Klain/Cronkite News)

TEMPE – In her 26th season as a head coach in Division I women’s basketball, Charli Turner Thorne reached a significant milestone in January, recording her 500th career victory when Arizona State beat Southern California in Tempe.

Only 81 coaches have reached or exceeded the 500-win plateau in Division I women’s college basketball, according to NCAA records, and only 142 coaches at any NCAA level have won 500 games or more.

But to her players, Turner Thorne is about a lot more than a big number in the win column.

Senior forward Jamie Ruden learned that when she battled depression and anxiety in her sophomore season at ASU.

“During that time, she was really there for me,” Ruden said. “She would text me or call me like three times a day to make sure I was sleeping and eating. And if I ever needed a hug or someone to cry to, she was always there for me and she was just so patient. Once I got out of that, she celebrated with me.”

It made the chance Ruden had to help Turner Thorne get the 500th win, and then celebrate it with her, that much more meaningful.

“That was really special,” Ruden said. “I am just really excited for Coach Charli, and I think it is just a testament to all the hard work she has put in over a really long amount of time. That is an accomplishment that not a lot of college coaches have, so it is really special to be a part of that.”

Before she arrived in Tempe for the 1996 season, Turner Thorne coached for three seasons at Northern Arizona University in Flagstaff and won 40 games. Now in her 23rd season at ASU, she is at 460 victories.

The Sun Devils have dropped three straight since the USC victory and try to get Turner Thorne’s 501st victory Friday when Washington State visits Tempe.

Even the 500th didn’t come easily. The Sun Devils went to triple overtime before emerging with the 76-75 victory. It was the first triple overtime in program history, but typical of Turner Thorne’s milestone victories.

“You can go back and look at every milestone win I am pretty sure that we have ever had (and it) has been exactly like this,” Turner Thorne said. “(They have all been) ugly, a grind-it-out, one-possession and crazy game. We knew it was coming. Maybe not exactly like this. I don’t know how we are going to top triple overtime.”

Turner Thorne’s program is modeled around the lifelong relationships as she has built with her players, including Ruden and sophomore guard Iris Mbulito.

Mbulito, who hails from Las Palmas de Gran Canaria, Spain, has connected with Turner Thorne since arriving in the United States.

After Turner Thorne eclipsed the milestone last weekend, Mbulito said she thought about her mom, who is a basketball coach in Spain. Because of her mom, Mbulito understands how much work Turner Thorne puts into her job. But part of that work is taking a personal interest in her players.

“She is like my mother here in America, so I just appreciate everything that she does for us,” Mbulito said. “She takes care of us … and she is an amazing coach.” 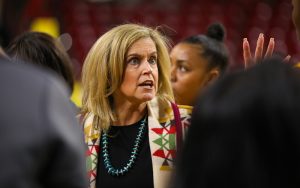 Turner Thorne’s program is modeled around the lifelong relationships as she has built with her players. (Photo by Brady Klain/Cronkite News)

Since she arrived in Tempe as a freshman, Mbulito has struggled with language, food and other aspects of adjusting to a new country. Mbulito said Turner Thorne is always there to help, whether it is about life or basketball.

Ruden echoed Mbulito as she continued to describe her similar impression about Turner Thorne.

“She loves us so much,” Ruden said. “I knew when I was coming out here that she would be like a second mom to me, and she has really been faithful to push us on the court and help us get better as basketball players, but then more than anything she cares about us growing as people. Off the court, she is always there for us.

“Through the highs and the lows, she has always had a lot of love for us, and whatever she can do, she will do it. She will go a million miles for you.”

“(This milestone) just makes you reflect on all of the incredible players, incredible staff and everything (over the years),” Turner Thorne said. “I mean, they are not “my wins,” they are for the ASU women’s basketball program and at NAU … and just all of those people that were involved in that.

“I am very grateful, and I am very blessed for all the people that work tirelessly.”

ASU senior guard Robbi Ryan said the Sun Devils are grateful, too, that they could be part of Turner Thorne’s special moment.

“I mean, Charli means everything to us,” Ryan said. “She gave us this awesome opportunity to play basketball at one of the highest levels, and she does a lot for us. I am just so grateful to be a part of her 500th win, and she deserves it.”