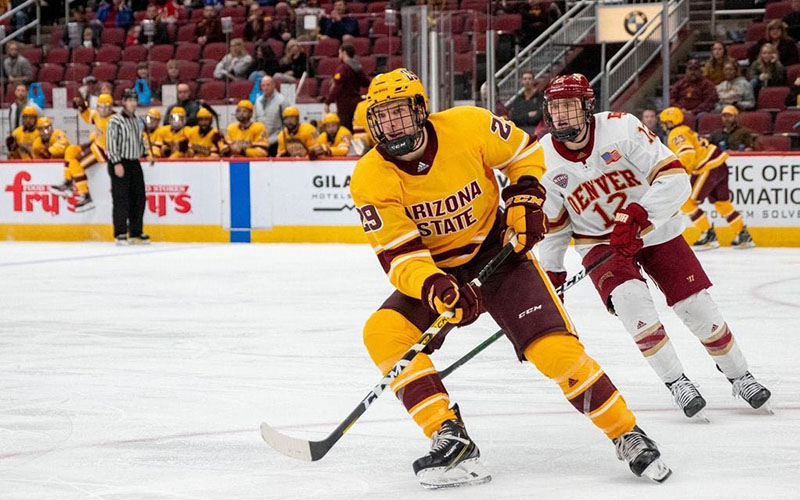 Willie Knierim has turned up his game for the Sun Devils over the past month, scoring seven goals and tallying two assists. (Photo by Travis Whittaker/Cronkite News) 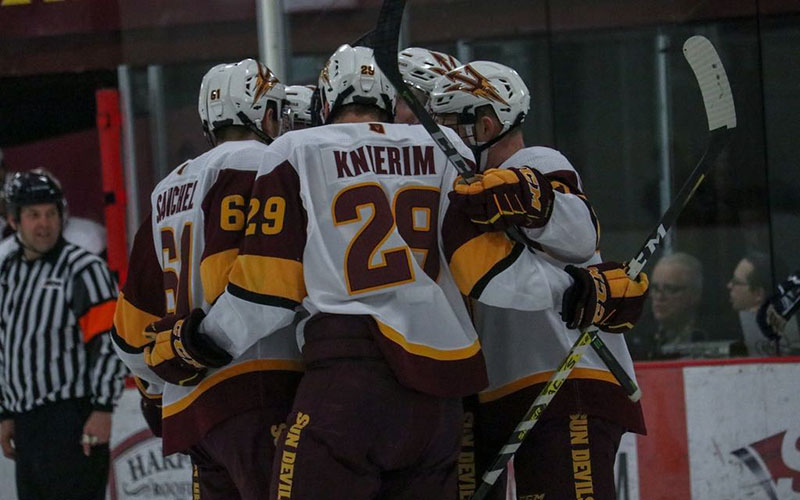 TEMPE – Junior forward Willie Knierim’s breakout season on the third line for No. 11 Arizona State this season has helped propel the youngest hockey program in Division l into position for a second-straight NCAA tournament appearance.

Knierim has turned up his game for the Sun Devils over the past month, scoring seven goals and tallying two assists to help ASU pull off a 3-2 upset win in overtime at No. 8 Clarkson on Jan. 25, then burying four goals in two games versus Robert Morris on Jan. 31 and Feb. 1.

But getting to where he is now was anything but easy for Knierim.

Two years of junior hockey with Iowa’s Dubuque Fighting Saints of the United States Hockey League, two years at Miami Ohio and another year in Dubuque before finally landing back on his skates in the Valley of the Sun.

Part of a 14-man recruiting class that was ranked among the top-five in the country, Knierim went into Miami Ohio, like any young player, with high expectations and a chance to be one of the top offensive players in his class. Scouts loved his size (6-foot-3, 215 pounds at the time) and his future pro potential. The forward was coming off back-to-back 27-plus point seasons with Dubuque Fighting Saints in the USHL, the top junior hockey league in the country.

But Knierim struggled with the Redhawks.

After a freshman season where he scored eight points in 30 games followed by a single point in 19 games during his sophomore year, Knierim returned to Dubuque to sort out his game.

Unlike the Knierim who first showed up in Dubuque as a 16-year-old brimming with confidence, the now-20-year-old went looking to regain his swagger. In Dubuque, he was now one of the oldest skaters on the team along with future ASU teammates James Sanchez and Jacob Semik.

“I think (it helped) just getting an extra year under our belt, just playing more and in crucial times of the game – power play, penalty kill, five-on-five, being a leader, etc,” Knierim said.

“Whether we liked it or not, coming back being the oldest guys – especially with James (Sanchez) and I just being bigger guys, our physical stature – it’s going to be known in the locker room. I think it really forced us to grow up even more, and every day we tried to get better and better and focus on craft.”

It’s been good for the Sun Devils, too. With six games to play, they appear to be in a comfortable position for the 2020 NCAA Hockey Tournament having won seven of their last eight games. As an independent, ASU isn’t a member of a conference and therefore cannot qualify for an automatic bid to the tournament.

After they complete their regular season Feb. 22, they will have to wait a month to find out their postseason fate.

Meanwhile, Sanchez, another first-year Sun Devil who has been a key to the team’s tournament chances, followed a route similar to Knierim after spending two years at the University of Michigan and then heading to Dubuque. He shared similar frustrations and a need for growth.

In Knierim, he saw that kind of growth right in front of him.
“You just see him coming from Miami, both of us going to Dubuque with little confidence, but once we go back there, he loves that place having already been there two years,” Sanchez said. “You can see he was comfortable back home. You can see his confidence growing.

“Coming here, same thing (as me), he’s playing big minutes. He handles it like a professional. He was thrown into a role that he personally was hoping and expecting to get. It’s not a surprise to him.”

Field believes Knierim’s confidence has grown with his success on the rink with the Sun Devils.

“It’s just between his ears,” Field said. “It’s just his confidence and him having some success. He knows that we believe in him, and that we will put him in situations that he is comfortable with and continue to run with it.”

Knierim has put up numbers in his big minutes in Dubuque – 47 points (18 goals and 29 assists) in 60 games – adding on two more points in six playoff contests. However, those weren’t his most eye-popping statistics with Dubuque.

Knierim owns the title of most penalty minutes in Dubuque history, 161 back in the 2015-16 season. He followed that up with 140 penalty minutes during the 2018-19 season.

“He likes to mix it up a little bit,” Sanchez said. “Obviously, last year he could fight, so he fought. He’s a tough kid and he would stick up for some younger guys, too, or just get the team going here or there.”

Knierim, who is now listed at 6-4, 225, chuckled about his fighting reputation.

“I don’t know if I enjoy it, but being a bigger, tougher, stronger guy; it doesn’t really bug me,” Knierim said.

Knierim has managed to stay out of the penalty box for the most part since arriving in Tempe and with his renewed confidence the ASU junior is playing some of the best hockey as the Sun Devils inch closer to another NCAA tournament appearance.