The Trump administration has proposed several changes to the Supplemental Nutrition Assistance Program, or food stamps, including a plan to limit benefits for able-bodied, childless recipients. But critics fear the changes could have a devastating impact. (Photo courtesy U.S. Department of Agriculture)

WASHINGTON – Advocates told a House subcommittee Thursday that a Trump administration plan to “close loopholes” in the Supplemental Nutrition Assistance Program would actually slam the door on millions of recipients, including as many as 72,000 in Arizona.

“This administration’s attack on SNAP is nothing more than violence waged on the most vulnerable among us,” said Rep. Ayanna Pressley, D-Mass., during the hearing. “Our children, the elderly individuals with disabilities, the poor and the sick.”

But supporters said the changes will not have the damaging impact critics fear. They said the administration should be applauded for proposing changes that could save billions of dollars by weeding out people who should not be getting benefits in the first place.

“Especially now in this booming economy, it makes sense to close loopholes and government gimmicks, and transition adults and their families from welfare to work, from government entities to self-sufficiency, and the American dream,” said Sam Adolphsen, policy director at the Foundation for Government Accountability.

The changes stemmed from an April 2018 executive order from President Donald Trump that called for reform of the welfare system to empower people to become self-sufficient. The changes to SNAP, or food stamp, benefits were proposed last year.

Under the proposal, able-bodied adults without dependents would only be able to get SNAP benefits for three months in a three-year period unless they got at least a part-time job or went to school. People who qualify for Temporary Assistance for Needy Families would no longer automatically qualify for SNAP, but would have to apply separately.

While both of those changes are expected to reduce the number of people eligible for food stamps, a third change could actually make more people eligible in 21 states, including Arizona. That proposal would standardize the way states calculate how household expenses, like utility costs, are figured when determining a person’s income.

The net effect of those changes, based on 2018 data, would have been to cut 3.7 million people from the SNAP rolls nationwide, saving about $4.2 billion in the process, according to a study by the Urban Institute. In Arizona, the report said, an estimated 72,300 people – or 32,700 households – would have lost benefits. 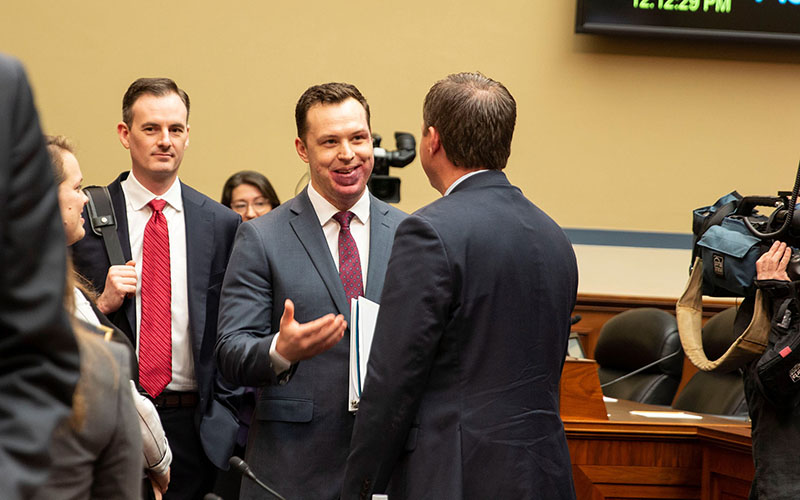 Andrew Sugrue, an economic policy analyst with Arizona Center for Economic Progress, called the changes practically “an assault” on the program that many Arizonans depend on.

“If you take away children’s access to meals – quality meals or subsidized meals – they are going to really struggle,” Sugrue said. “Children could struggle academically, threatening their future economic opportunity (and) their families would be placed with an additional financial burden.”

Almost 800,000 Arizonans, in about 400,000 households, received SNAP benefits in October 2019, according to the U.S. Department of Agriculture data.

Diane Sullivan, an advocate for Witnesses to Hunger, had a personal reason for her testimony Thursday to the House Oversight and Reform subcommittee: She’s a mother of six who has received SNAP in the past. She testified that the proposed rule changes could cost her family benefits that it took them three months to get in the first place.

“So many times I literally cried myself to sleep, and I know I am not alone in this, there are millions of us out there because I didn’t eat myself that day and was uncertain how I will feed my children the next day,” a passionate Sullivan told the panel. “This is the reality, the reality that so many of us face,”

She said SNAP allowed her to not only feed her family but also provide her children with healthy snacks to carry them between school and activities and meals.

But Adolphsen, a former chief operating officer at the Maine Department of Health and Human Services, said the changes are a “practical” way to reduce fraud in the system and make sure the benefits go to people who really need them. The Agriculture Department has said the revisions will create a clearer, stricter nationwide policy that extends eligibility to households that have demonstrated an intense need. 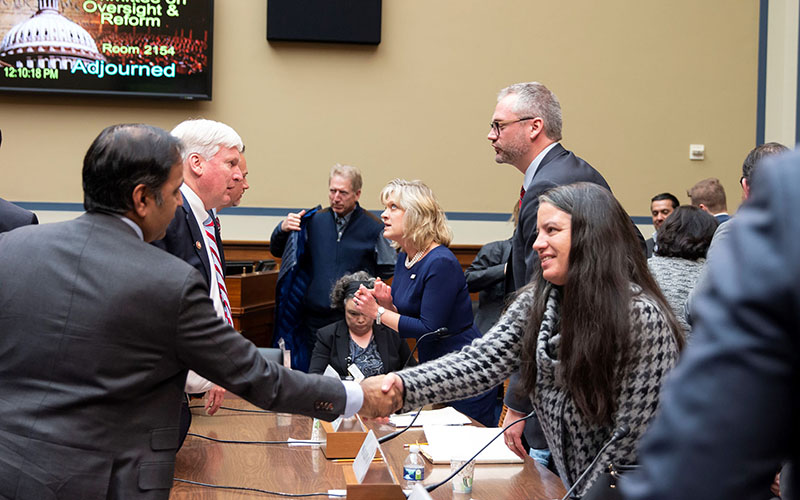 Diane Sullivan, a mother or six and advocate for Witnesses to Hunger, shakes hands with Rep. Raja Krishnamoorthi, D-Illinois, after testifying on how SNAP cuts would affect her. (Photo by Jessica Myers/Cronkite News)

Rep. James Comer, R-Kentucky, welcomed the rule that would push able-bodied adults to find work in order to continue receiving welfare. He said employers in his district are afraid to expand their businesses because they are not confident they will be able to fill any new positions.

“This is something that I appreciate the administration trying to adopt,” Comer said. “And anything I can do to see that this happens I’m certainly going to do it, because that’s what the people in my district want.”

Adolphsen downplayed concerns that the limit on SNAP benefits would lead to a steep reduction in the number of children eligible for free or reduced-price school meals. The USDA estimates that only about 0.1% of all children in the school meal program would lose access.

But Rep. Raja Krishnamoorthi, D-Illinois, questioned the need for the changes.

“It (SNAP) has the lowest fraud rate of practically any government program, so what’s the point? What’s the real point going on here behind trying to cut back the eligibility requirements?” asked Krishnamoorthi, the subcommittee chairman. “I think it’s politics.”

He said that, at the end of the day, what happens with these changes “defines who we are as a country.”

“To Donald Trump, I would just say do not go forward with this rule,” he said. “Do not attack our children … We are better than this.”