Samantha Noennig is the reigning NCAA champion in both indoor and outdoor shot put, and she currently has the longest throw among all collegiate women so far this season. (Photo courtesy of Arizona State Athletics)

TEMPE – The Arizona State track and field season is only a month old, but throwers Turner Washington and Samantha Noennig have already put the Sun Devils among the national contenders. Both rank among the top three for the longest shot-put throw in NCAA competition this season.

While their successes have mirrored each other’s this season, the paths they took to reach this point are drastically different.

For Washington, 2020 marks a return to competition after redshirting last year following his transfer from Arizona. In his first event of the season at the NAU Friday Night Duals on Jan. 10, the sophomore impressed, recording a personal-best put of 20.43 meters. His throw is the third farthest in the NCAA and it represents almost as good of a Sun Devil debut as Washington could have imagined.

“I think my first performance, I was happy with,” Washington said. “It was an indoor (personal record) and pretty close to my actual P.R. My second meet didn’t go as planned, but I feel like we’re moving in the right direction.”

Noennig, a redshirt junior, has already established herself in the ASU record books. The junior won the NCAA shot put title at the indoor and outdoor national championship meets last season. The first few meets of her title defense appeared to go well by most standards, but Noennig said there are improvements to be made.

“I haven’t started off as well as I would have liked, but I think we’re moving in the right direction and making some good technical changes that will hopefully transfer into further throws,” Noennig said last week.

The improvements materialized on Saturday at the New Mexico Invitational, when Noennig climbed to the top of the U.S. Track and Field and Cross Country Coaches Association leaderboard with a throw of 18.17 meters. It marks a new personal record for Noennig and is also the first time in the 2020 season that a woman has put the shot 18 meters or more.

The fact that the Sun Devils have both Washington and Noennig competing at such high levels in the same event is unique. ASU is the only school that can claim a top-five male and female shot putter. This fact is not lost on the two, who came to ASU, in part, to work alongside other accomplished throwers.

“There’s a tradition here of people throwing far, so you surround yourself with like-minded people,” Washington said. “They just push you if you’re slipping up, or if you’re having problems with your technique. It’s another set of eyes to be there watching and to be there to support you.” 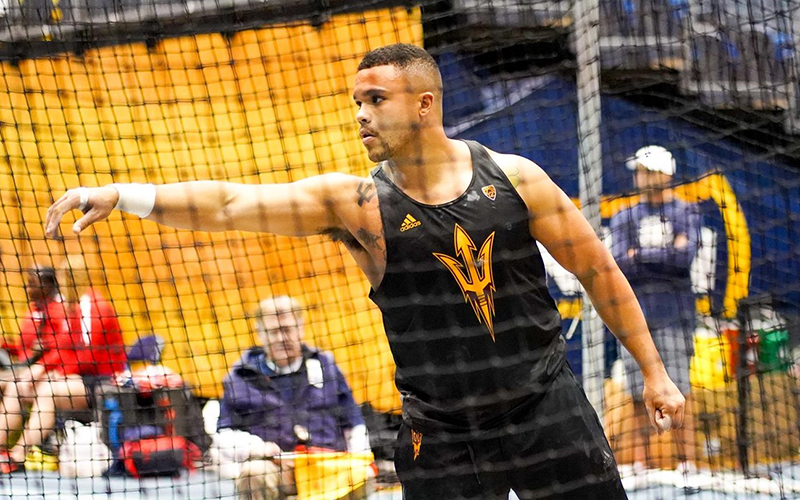 Turner Washington, competing in his first season for the Sun Devils after redshirting the 2019 campaign following his transfer from Arizona, currently ranks third among all collegiate shot putters for longest throw so far this year. (Photo courtesy of Arizona State Athletics)

Washington and Noennig are not afraid to ask each other for advice if they believe the other one is doing something better.

“Whenever someone has a problem that the other person knows how to do, we go to them and ask ‘How do you do this? Can you fill me in?’ ” Noennig said.

“We have similar technical bad habits, so if she’s got it figured out, I’ll ask her how to do it,” Washington said.

Washington and Noennig view this willingness to help each other as another advantage in their quest to be major players in the collegiate throwing world this season.

“Before I had Turner, I had Maggie (Ewen, former NCAA shot put national champion who was teammates with Noennig at ASU), and she showed me the ropes around here and showed me how a champion is supposed to train,” Noennig said. “Now I can do it with Turner, so it’s a nice benefit of having a good training partner.”