Angela Hughey, president of One Community, an advocacy group for LGBTQ people, said an anti-discrimination bill “is an issue of fairness.” (Photo by Alicia Moser/Cronkite News) 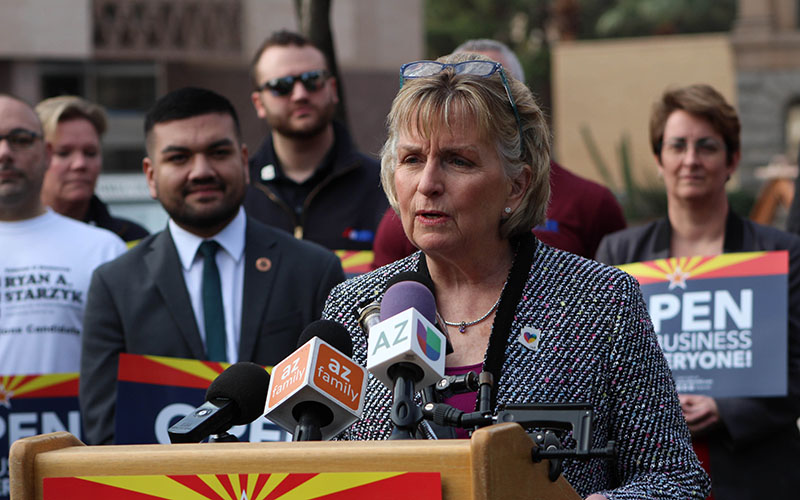 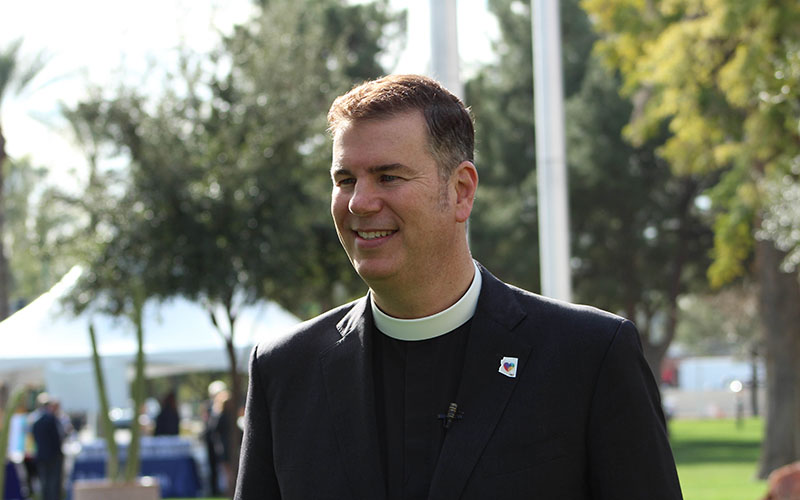 The Rev. Troy Mendez of Trinity Episcopal Cathedral spoke about the proposed non-discrimination bill on the lawn of the state Capitol on Jan. 30. (Photo by Alicia Moser/Cronkite News)

PHOENIX – Several lawmakers and community leaders on Thursday said the state needs a law to protect Arizonans from being fired, denied housing or refused service because of their sexual orientation or gender identity.

Lawmakers failed to get a similar law passed last year, but supporters have returned to introduce a bill that would add state-wide protections rather than relying on a patchwork of protection in certain ZIP codes.

“It is a simple, common sense measure to update our nondiscrimination law,” McGee told a news conference at the state Capitol. All Arizona residents should have the opportunity to “earn a living, provide for their families and patronize businesses without fear of being legally fired because of their sexual orientation or gender orientation.”

The bill comes after the Brush & Nib v. City of Phoenix decision by the Arizona Supreme Court that protects basic speech and religious freedoms, in which a business had the right to refused to make wedding invitations for a same-sex couple.

“The Supreme Court opened up Pandora’s box, which now says that if you follow specific guidelines you can make it so your business, too, can discriminate against the LGBTQ community,” he said, adding that the expansion of the LGBTQ caucus in the House to six members may help influence the trajectory of the bill.

“We have more people applying pressure to leadership on both sides of the aisle,” Hernandez said. “This is not a partisan issue. This is a bipartisan issue where we all agree that this is the right thing to do.” 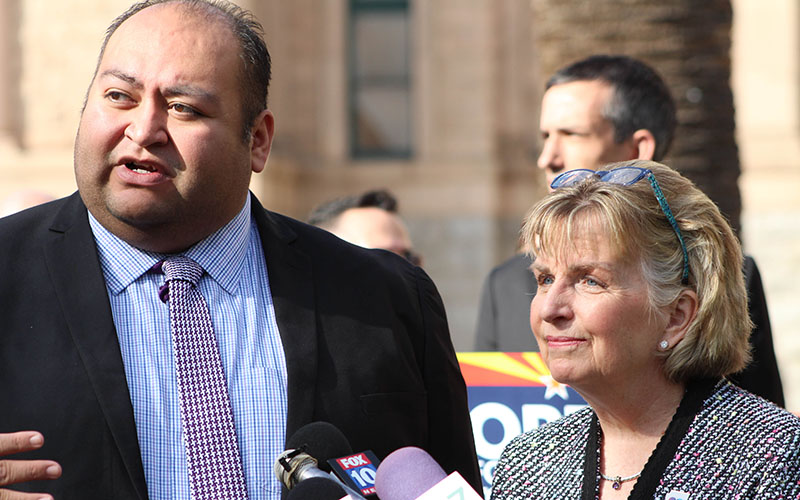 Arizona Rep. Daniel Hernández Jr., a Democrat, and Sen. Kate Brophy McGee, a Republican, speak about a bipartisan bill to create a state law to ban discrimination based on sexual orientation and gender identity. (Photo by Alicia Moser/Cronkite News).

The bills faces opposition, however.

The Center for Arizona Policy, a conservative nonpartisan organization, stated in a news release that the bill overlooks the Brush & Nib ruling and infringes on religious freedom.

The bills “offer a solution where there is no problem and create major constitutional dilemmas for a vast number of Arizonans who do not conform to proponents’ viewpoints.”

They also would take “an ax to religious freedom by amending Arizona’s Religious Freedom Restoration Act to allow the government to substantially burden a person’s exercise of religion with nondiscrimination laws.”

“Arizona voters overwhelmingly support citizens’ rights to live and work according to their deeply held religious beliefs, even when those beliefs are unpopular,” the statement says.

Angela Hughey, president of One Community, says the bill “is an issue of fairness.”

One Community works toward LGBTQ equality in the Arizona workplace, establishing a Unity Pledge for businesses.

“We need to keep having broad-based conversations with everyone that we can talk to around the state and we will get it done,” she said. “We’re building that very wide, bipartisan coalition of support.”