SCOTTSDALE – The first day of a tournament week on the PGA Tour is usually the least eventful. Many golfers are still traveling from the location of the previous week’s competition, or simply taking a day off after an exhausting week before arriving at their next tour spot.

There was no lack of vigor on this particular Monday at the Champions Course at TPC Scottsdale. Walking into the area of freshly cut green grass on another sunny day, a girl warmly introduces herself to every new face she notices joining the gathering of people.

At first glance, she appears to be just one of the many participants in the Tesori Family Foundation’s All-Star Kids Clinic, an event aimed at providing those with special needs a chance to play golf with their peers through engaging, interactive games.

Instead, she is Amy Bockerstette, who took the 2019 Waste Management Phoenix Open by storm.

Last year, at the invitation of Special Olympics, she played the 16th hole during a Tuesday practice round with golfers Gary Woodland and Matt Kuchar. She parred the hole in front of a roaring crowd, stating first, “I got this,” and the video of the moment quickly went viral.

This stuff never gets old ❤️

Special Olympics golfer Amy Bockerstette warmed our hearts with this incredible par on the 16th hole at TPC Scottsdale.

Monday, she again unveiled her skilled swing. It’s not a surprise. Bockerstette is a sophomore at Paradise Valley Community College on a golf scholarship. Only a few years before the start of her college career, she became the first person with Down syndrome to earn an invitation to the Arizona state high school golf tournament.

“We like to think that Amy is a bit of a role model for people with intellectual disabilities, that demonstrates that you can’t put limits on what our children can do,” said Joe Bockerstette, Amy’s father and caddy. “Every year has been another surprise from her in the golf community, and the influence and reach that she’s had has just been incredible.”

Monday, many saw that firsthand.

“It’s always fun to see these young people get a golf club in their hand and get out there and take a few swings,” said Rob Walgate, an executive board member of the Tesori foundation. “There’s so many people that are willing to serve, that want to help out. I think that’s important in today’s day and age because sometimes we hear a lot of negativity, we hear a lot of hate. Look at all the people out here and all they want to do is love on one another, and that’s encouraging.”

Walgate insists on starting the event by having Bockerstette step up to the tee and give it her best swing, in front of a large crowd of her peers with all eyes on her.

On Wednesday, she got to reunite with Woodland at the famous 16th “stadium” hole, and this time the gallery made sure she knew they remembered her. Her foundation, named “I GOT THIS,” born out of that moment in the 2019 tournament’s practice round, received a $25,000 donation from Thunderbirds, the civic organization that hosts the tournament each year. 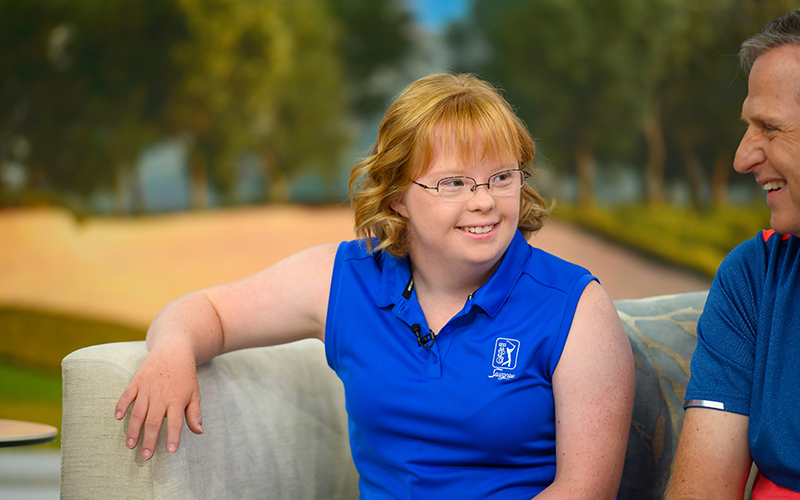 According to Joe Bockerstette, this will be huge in helping to kickstart programs for kids with situations similar to Amy’s.

The founders of the group putting on Monday’s event, Paul and Michelle Tesori, were moved by Amy and her story upon learning of it one year ago. So much so that they invited her to appear at their first-ever event in the Phoenix area.

“Michelle reached out to my wife, Jenny, after Amy made par (on the 16th hole) last year,” Joe recalled. “Then we met Michelle in June, and they invited us to be a part of this event this year. So, we’ve known them for just about a year now.”

Sure, it helped that Paul is the caddy for PGA tour golfer and former U.S. Open champion Webb Simpson, so you could say he shares a love for the sport with her. But they found a connection beyond just the game they love so dearly.

That’s because in 2014, four years after turning their foundation from idea to reality, the Tesoris had a son, Isaiah, born with Down syndrome.

“That helped kickstart a lot of stuff with the foundation and the All-Star Kids clinics,” Walgate said. “I think of that little guy and all the joy that he has brought to so many people around the country, and all the lives that he’s impacted and reached with his story.

“It’s opened up a lot of doors and a lot of opportunities for the Tesoris, the (executive) board, so many people to go out and serve, and that’s the one thing about these All-Star Kids clinics that you see: caddies, PGA tour players, and so many people step up and want to be a part of it. They want to help.”

For this clinic in particular, it was golfer Harry Higgs, currently 35th in the Fed Ex Cup standings, who showed up and could be seen instructing and encouraging kids as they took swings at the driving range.

As for the presence of a caddy, that would normally be Paul Tesori, but with him still making his way to Arizona it was none other than Ted Scott who took his spot. Affectionately known as “Teddy” by members and fans of the tour, Scott is the longtime caddy of two-time Masters champion Bubba Watson. He revealed his close personal relationship with Paul and the Tesori family, and how this is not the first example of him stepping in for his good friend.

“When (Isaiah) was born, I was caddying for Webb Simpson for him because he wanted to be home for the birth,” Scott recalled. “I actually wore his name on my hat the week that he was born, so it’s just kind of a cool connection that I had already. Then when they started the foundation I was like, ‘that sounds really fun,’ and then once you show up here you just feel like you got to do everything you can to get to more (of the clinics).”

Scott also shared that his brother-in-law has a daughter with special needs, so much like the parents in attendance, he understands the challenges and joys that come with such a situation. The way he sees is, events like these can help work towards erasing stigma and uncomfortable awkwardness around kids who face specific challenges in day-to-day life, as well as their families.

“The lack of knowledge that we have if somebody has special needs, we’re just kind of like afraid to approach a parent, or get involved,” Scott said. “But once you do it, I think a lot of those fears go away. People realize, ‘man, this is a lot of fun,’ and they’re just normal kids that want to go out and have a good time…it’s just a blast, man, it really is.” 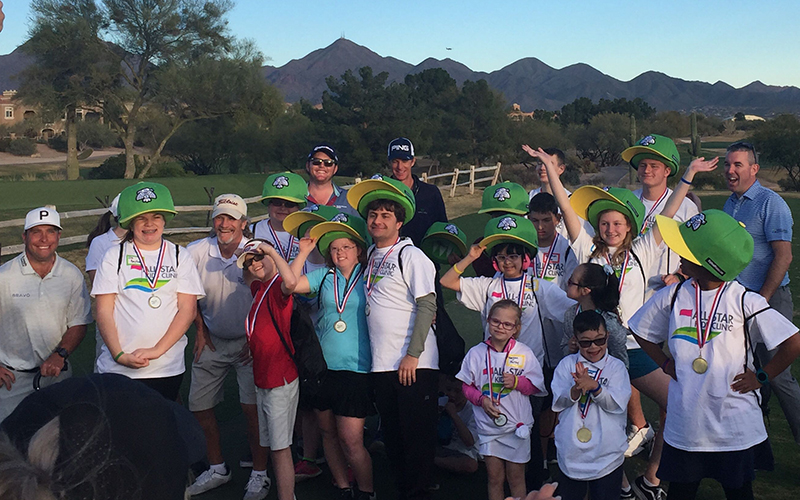 Amy Bockerstette enjoys working with other young golfers, including these who participated in the Tesori Family Foundation’s All-Star Kids Clinic. (Photo by Christopher Gleason/Cronkite News)

While it’s the foundation’s first time putting on an event in the Phoenix area, they hope this first stop of 2020 is followed by many more in other cities hosting PGA tour events, as they’ve done already in years past.
Each year, they’ve expanded to more and more cities, and they hope this first year of the decade is no different.

“The goal is 20 (cities), and I think we’re going to get to that goal,” Walgate said. “When you look around at all these young people, and you see the smiles on their face, maybe for some they’re stepping out of their comfort zone a little bit and doing something they wouldn’t normally do.

“It just puts a lot of smiles on faces, and you also see those same smiles on moms and dads, grandmas and grandpas, aunts and uncles. It’s just a joy, and it’s a blessing.”

It’s not just the families and kids who participate that can get something memorable out of this experience, but as Scott explains, there’s a powerful lesson to be learned for the professionals at these events as well.
“Perspective,” Scott said. “We often take the results (of golfing) and make that our joy, our happiness…I think you can make a golf shot bigger than life, and this brings you back to reality. There’s everyday struggles, and everyday joys that you can pay attention to that don’t have to be based on how you hit a golf ball or what kind of result you get.”

For Amy, golf is a vehicle to prove that these everyday struggles don’t have to define who you are. In such a short window of time, she inspired people of all levels of ability, both in the game of golf and life, and drove the event to serve as a powerful reminder of the impact sports can have.

If the Tesoris are able to get this clinic to as many tour places as they intend, there’s certainly countless others waiting to be inspired.