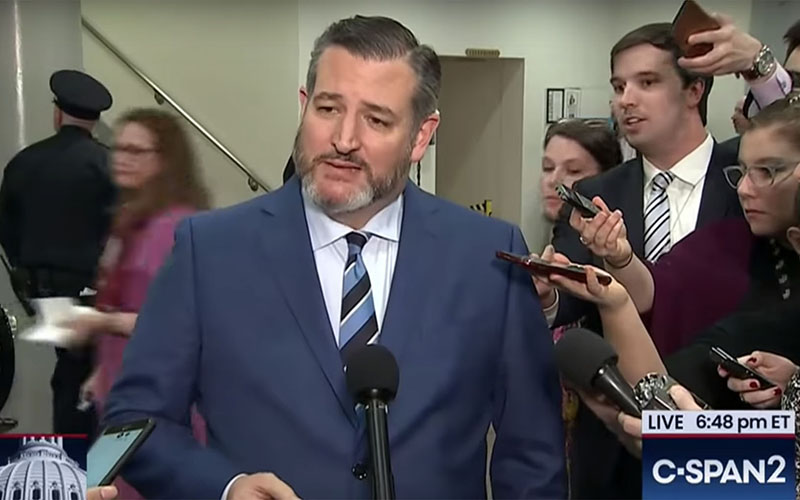 Sen. Ted Cruz, R-Texas, one of many senators who speak to reporters during President Donald Trump’s impeachment. While senators are supposed to be impartial jurors during the trial, they have done some very unjury-like things. (Photo courtesy C-SPAN)

WASHINGTON – When senators return to their roles as jurors Wednesday in the impeachment trial of President Donald Trump, they will get to do something jurors in a normal trial never get to do – question the attorneys.

But that’s not the only difference between a normal jury and these “jurors,” who can wander off during testimony, occasionally nod off and almost certainly began the trial with their minds already made up.

“There are some individuals who would not have served had this been a jury trial because their minds have been made up and they would not have passed through the jury selection process,” Jeffrey Frederick said of the Senate jurors.

“If it was an actual trial, if a judge saw a juror sleeping, or if a juror got up and walked out of the room, the judge would halt the trial immediately – potentially hold the juror who left the courtroom in contempt,” said Frederick, who directs jury research services for the National Legal Research Group.

If it was an actual trial, of course, jurors would not run off to banks of microphones to give reporters their opinions of the case so far, as senators have. Reporters would likely not be fixated on whether jurors were drinking milk or water in the trial – Arizona Democratic Sen. Kyrsten Sinema is in the water camp, according to staff – or what they are wearing – Arizona Republican Sen. Martha McSally has sported a blanket scarf and thick socks in the chamber.

What happens outside the trial is what most clearly sets senators apart from a regular jury. While regular jurors cannot discuss details of a case with anyone, senators have been making a bee-line to reporters during breaks to openly discuss and share opinions on the trial’s progress.

Sen. Ted Cruz, R-Texas, even started a podcast about the impeachment trial, “Verdict with Ted Cruz,” recording the first episode after the first day of the trial ended past 2 a.m. It’s currently No. 1 on the Apple podcasts charts.

But there are similarities with regular juries.

According to strict rules from the Senate sergeant-at-arms, senators can only read material relevant to the trial and cannot use their phones or have any electronic device in the chamber with them. They can pass notes but cannot talk to each other, under threat of imprisonment. While they can get up and leave the chamber, they are expected to “be in attendance at all times during the proceedings.”

Those restrictions have made some long days of testimony even longer. After two tedious back-to-back 12-hour days of debate last week, experts wonder how focused these jurors can be.

“If the goal is to actually get people paying attention, I’m not sure that’s the right idea,” said Leslie Ellis, president of the American Society of Trial Consultants, of hearings stretching past midnight.

“I can’t really speculate as to what the purpose of those hours was, but it certainly doesn’t lend itself to people being engaged and paying attention,” Ellis said.

Hearing a case until 2 a.m. is practically unheard of for a regular trial, Frederick said. While he does not think the unusually long days will have a significant impact on the trial, he does believe senators could lose focus, causing them to miss details that might inform their votes.

“The senators may think they know everything – and I don’t know if they do – but they have to base their decision on what is being presented by the House representatives and by the defense,” Frederick said.

Another reason they might become distracted, he said, is that they have already made up their minds without hearing the whole case.

Greg Morvillo, an attorney who has written about jurors’ attention spans, said even a moment of distraction could have a big impact on a juror’s understanding of the case.

“Cases tend to turn on a number of small facts – often not one big fact,” said Morvillo, who specializes in white-collar crime and government investigations.

He said research shows that taking breaks while learning new information significantly improves memory and performance, which is how he thinks trials should be conducted.

“The information is dense in a trial and it is presented sort of in rapid-fire succession, it’s very hard to process it all,” Morvillo said. “So jurors and people on this kind of a panel could end up missing important information and or misunderstanding it and or miss processing it.”