Junior achievement: After weathering storm, this class ready to lead ASU baseball back to Omaha 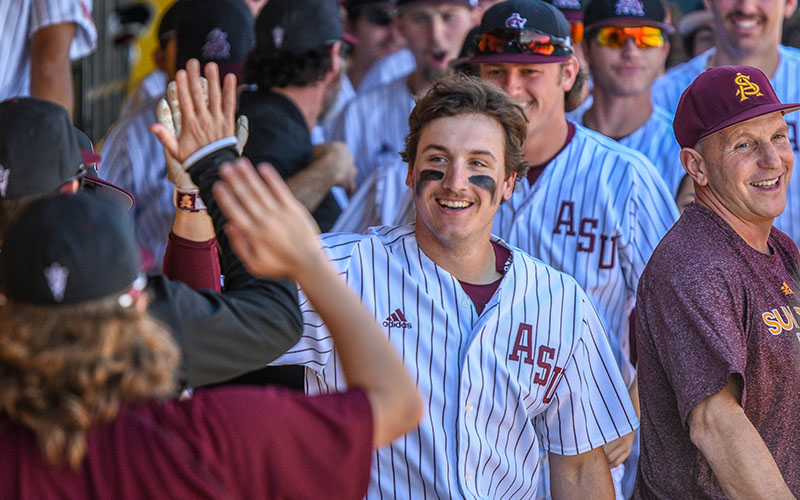 Trevor Hauver is an ASU junior who followed Tracy Smith’s plan to build for a season the team hopes will end in with a trip to the College World Series for the first time since 2010. (Photo by Brady Vernon/Cronkite News) 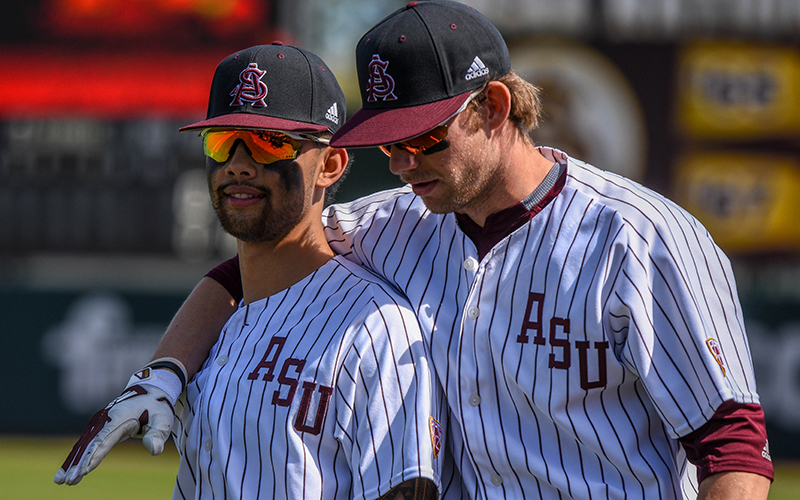 PHOENIX – Two years ago, Arizona State baseball coach Tracy Smith continued to insist that everything happening was for the bigger picture. The Sun Devils’ 2018 season ended up being one of the worst in the history of the program in terms of record.

That second straight losing season, however, also presented optimism for the future.

The Sun Devils featured numerous freshman position players. Infielders Spencer Torkelson, Gage Workman, Alika Williams, Drew Swift and outfielder Trevor Hauver all saw significant time over the course of the season. And outside of Torkelson, who took the nation by storm after crushing Barry Bond’s all-time freshman home run record at ASU, each had their share of struggles.

Despite calls for Smith’s job, athletic director Ray Anderson backed him after the 2018 season, believing in his plan with the group of freshmen.

“I get it. We all want ASU baseball to be at an elite level,” Anderson said back in 2018. “We are staying the course because we believe Tracy Smith has a plan, he’s shared with us, that will get us there.”

In hindsight, it appears Anderson’s decision was the correct one. Arizona State exploded onto the national college baseball scene in 2019. Ignited by a high-powered offense, ASU jumped into the Top 10 of multiple rankings at one point of the season.

Torkelson kept smashing home runs and building his case to be the potential first overall pick in the 2020 MLB Draft, but it was the significant jumps by Williams, Workman, Hauver and Swift that helped make the leap back into the national picture. The improvements were of no shock to associate head coach and recruiting coordinator Ben Greenspan.

“When guys come in as freshmen and have to play 56 games, you never really know what you’re going to get,” Greenspan said. “Over the course of the last two years it’s been pretty exciting to watch them develop, watch them grow. …

After playing in a regional last season, Arizona State gained postseason experience. The value of that plays a major part in where the team wants to go this season: Omaha. Internally and externally, the expectation is for the Sun Devils to get back to the College World Series for the first time since 2010. With nearly every preseason poll having the Sun Devils in the Top 10, including Baseball America having them as high as third, the players are glad they stayed the course with Smith’s vision.

“It’s crazy to think that he was right,” said Hauver about Smith’s plan. “He told everyone that it was going to happen and I think it’s going to, knowing that we’ve matured so much as players and as people.”

The junior group will most likely all be selected in the upcoming 2020 MLB Draft. According to MLB.com’s Draft 100 list, Torkelson (2), Workman (33), Williams (38) are all listed in the Top 40 prospects. Hauver and Swift are also expected to be taken this upcoming June.

For all the success on the baseball field, it’s the bond created away from it that players believe makes the squad special. Each one has mentioned the ability to help one another, living with one another at different times of college and just being there for the accomplishments and failures.

“It’s awesome. Me, Workman, Hauver, (Swift), we’re just one big family out there,” Williams said. “It’s easy to play out there when you know they got your back. … It’s crazy to see how far we’ve come since freshman year.” 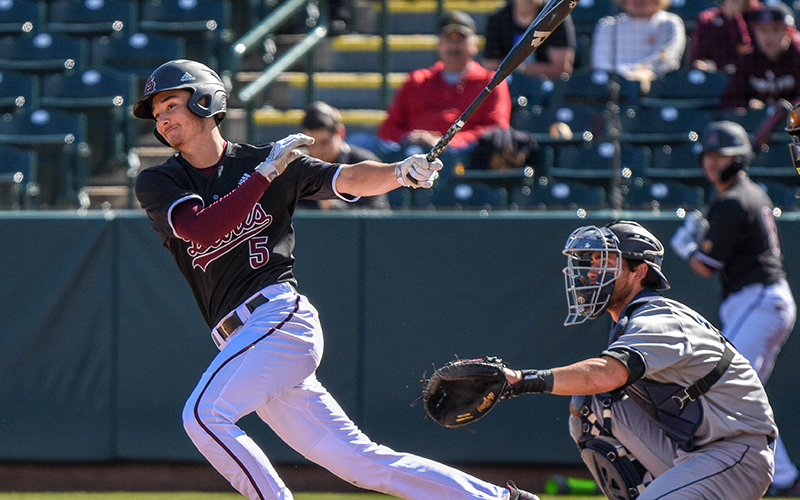 Alika Williams is one of the juniors expected to go high in the 2020 MLB Draft. (Photo by Brady Vernon/Cronkite News)

At the end of the day, even if the Sun Devils win their sixth National Championship, and the junior class turns out to be high-end draft picks who break records, that might not be why they’re remembered. Knowledge comes fast when thrown into the fire and the veteran juniors want another highly touted freshman group to learn from their mistakes.

“Looking back it was pretty tough but at the time we didn’t know anything else,” Workman said. “That year really helps us especially with the underclass and show them the way to do things and the way to not do things because we’ve been there and done them the wrong way.”

The biggest thing frustrated Sun Devils fans have wanted the past few years is for the historic program to return to where it once was. The talent is there and now it appears the foundation for the correct culture has been established as well.

For Smith, he has known what this group could become. He also knows that his plan still hasn’t reached its final stages.

“When you talk about building, you play those guys early (in their careers) in hopes they continue to develop,” Smith said. “It’s different going into (this season) … The whole ranking thing it’s nice, it’s good for them to get recognition but it’s on paper.

“It’s what happens at the end of the day.”