Mesa Mayor John Giles told a panel at the U.S. Conference of Mayors meeting in Washington that the problems surrounding immigration policy affect all cities – and must be addressed by all. (Photo by Joshua Gerard Gargiulo/Cronkite News) 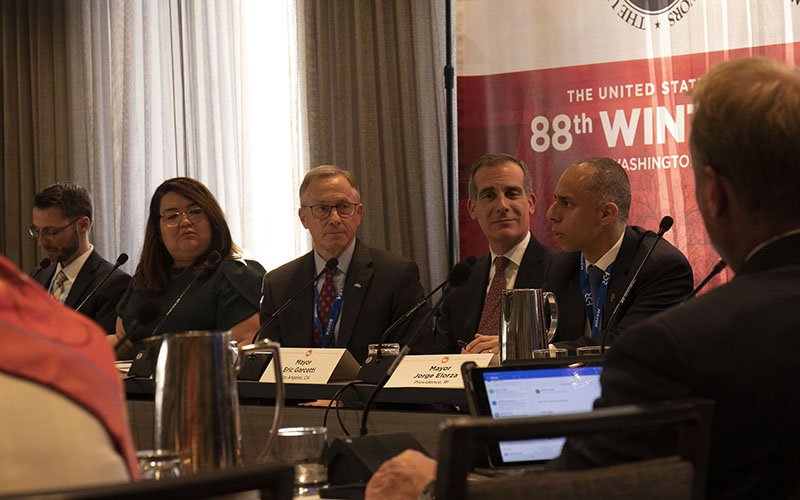 WASHINGTON – They were Democratic and Republican mayors from cities large and small across the country, but officials on the panel Wednesday on immigration agreed – it’s an issue they all grapple with.

For Mesa Mayor John Giles, the U.S. Conference of Mayors event “reiterated to me that immigration, and immigration reform issues, are not just a state or border city issue. This is ubiquitous throughout the United States.”

Giles and Los Angeles Mayor Eric Garcetti led the session, which touched on everything from the prospects for the DACA program to border policy to the future of a Trump administration plan to stiffen the so-called “public charge” rule for immigrants. The packed forum on current immigration issues included panelists from United We Dream, the National Immigration Law Center and Center for American Progress.

While the discussion was wide-ranging, much of the hour was spent discussing the uncertain future of DACA, the Obama-era Deferred Action for Childhood Arrivals program that the Trump administration tried to kill more than two years ago.

That move was blocked by courts and while the Department of Homeland Security is not accepting new applicants, it has been approving renewal applications for existing DACA recipients. The number of people covered has slipped from about 690,000 when the Trump administration said it planned to end the program to about 660,000 at the end of fiscal 2019, according to DHS data.

“The reality is, we thought the DACA program would end on Day One of this new administration,” said Greisa Martinez, executive director of United We Dream Deputy.

“But because of your collective work, the work of immigrant young people – courageous legal warriors, as some call them – we have been able to maintain it so far,” Martinez said.

Under DACA, immigrants who were brought to this country illegally as children and have known no other home are allowed to apply for a deportation deferral, go to school, get a driver’s license and work authorization. The deferral is renewable, but applicants have to have clean records and be in school, the military or holding down a job, among other requirements.

It is unclear how much longer the program will be around. The Supreme Court heard arguments in November about whether the Trump administration acted properly when it moved to end the program and is expected to make its ruling this spring or early summer.

But Garcetti, Giles and Mayor Jorge Elorza of Providence, Rhode Island, echoed Martinez’s point that “DACA is needed” – if only for the large number of workers who are immigrants. The three mayors pointed to numbers that that show half of the 19.5 million lawful immigrant workers in the U.S. hold manual-labor jobs.

Although the mayors said the government needs to help immigrants, they also said immigrants need to help local governments stand up for them.

Garcetti, a Democrat, and Giles, a Republican, stressed the need for partnership in their cities with Hispanic communities, urging them to become more engaged with local governments.

“The Hispanic community needs to engage. Hispanics are underperforming politically, they’re not coming out in the open, in the way they should,” Giles said. “And I think we need to encourage and support our Latino leaders. They need to understand that they need to own that.”

One test of that partnership will be in the upcoming census. Officials at Wednesday’s event repeated warnings that undercounting minority groups can drastically affect the federal funding, or lack thereof, for programs used to support undocumented immigrants.

Both Garcetti and Giles stressed the importance of encouraging census participation by undocumented immigrants, regardless of fear of deportation – with Garcetti urging those in attendance to show up at a Thursday program on “Ensuring an Accurate Count in Diverse Communities During the 2020 Census.”

Despite the challenges faced by immigrants and the local governments that serve them, Giles said he is generally optimistic about what is “very much a pressing, national issue.”

“I think there is a real sense of optimism in this room, because even though politically we may be in some of the darkest days,” he said, “I think, at the same time, that there are people who are anxious to come together on certain issues.”