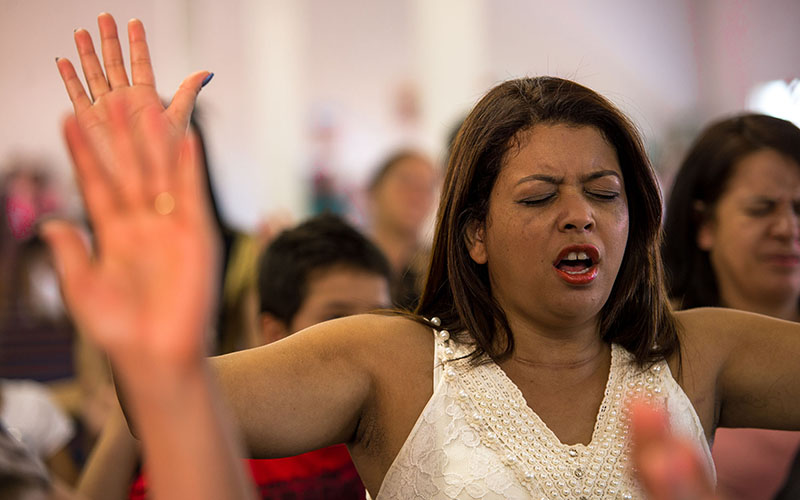 The Trump administration unveiled a number of new rules it says will protect religious freedom, including rules on prayer in schools, but critics said the changes are mostly for show. (Photo by Michael Swan/Creative Commons)

WASHINGTON – Arizona religious groups said the Trump administration’s release this week of regulations aimed at protecting religious expression “rights a serious wrong,” but others expect the moves will have little practical impact.

Foremost in the raft of rules rolled out by the White House Thursday is federal guidance on reporting schools that violate a student’s right to pray in school.

State education departments are already required to report those incidents, but advocates said the new language will strengthen those protections. Secular groups disagreed that prayer is threatened, but agreed with the intent of religious freedom – saying they are more often the ones whose freedom is in need of protection.

“We want to point out that the routine violations are really students who are being proselytized at public schools,” said Annie Laurie Gaylor, co-president of the Freedom From Religion Foundation.

The rules unveiled Thursday by President Donald Trump were a followup to his 2018 executive order that called on federal agencies to defend expressions of religion and ease burdens on faith-based groups that receive federal funding for services.

Cathi Herrod, president of the Center for Arizona Policy, hailed the action that she said confirms the right to religious expression.

“It reaffirms the fundamental right to exercise one’s religion guaranteed in the U.S. Constitution,” Herrod said in an emailed statement. “A right that has been repeatedly infringed upon over the years on campuses, in classrooms, at work, and elsewhere.”

At an Oval Office event Thursday, Trump was backed by several students and teachers who said their religious rights were violated by their schools.

“Tragically, there is a growing totalitarian impulse on the far-left that seeks to punish, restrict, and even prohibit religious expression,” Trump said. “That is why, today, my administration is issuing strong new guidance to protect religious liberty in our public schools.”

Under current law, state school systems risk a loss of federal funding if they do not report violations of a student’s right to pray to the U.S Department of Education. An official with the Arizona Department of Education said Thursday’s “doesn’t do that much” but is more of a reaffirmation of “the right to religious expression in public schools.”

But Gaylor said that Trump is addressing a problem that doesn’t exist.

“He’s trying to create the phony impression that religious students and teachers are routinely discriminated against in our public schools,” she said.

Her organization, which works to stop instances of illegal school-led prayer and proselytizing said it sent letters to 17 Arizona school districts from 2017 through 2019 for alleged violations of the constitutional requirement for a separation between church and state. The foundation also received 57 complaints of such violations at Arizona schools in the same timeframe.

The organization sent a letter to a school in Tuba City last year, for example, saying its practice of offering a prayer at graduation amounted to an “unconstitutional religious ritual.”

But the Scottsdale-based Alliance Defending Freedom said there have been several cases in Arizona where schools violated students’ right to exercise their religion.

“We have had … instances in Arizona where we had either a religious student club that was being denied equal access, the ability to form or get access to benefits that other clubs were provided,” said Matt Sharp, senior counsel for that foundation that defends religious rights.

Sharp said he hopes the guidance released this week by the administration ensures compliance from schools and guarantees this sort of discrimination never occurs.

“We’ve been dealing a lot with students being told they can’t engage in religious expression, pray at school, hand out invitations inviting their classmates to form religious clubs,” Sharp said. “That should never happen. The Constitution is the only permission slip that any schoolkid should have to live out their faith at school.”