Los Angeles Cougars President Ronan Wall has been in LA for four years and has been an integral part in bringing Gaelic football back to the city. (Photo by Curtis Petraglia/L.A. Cougars GFC) 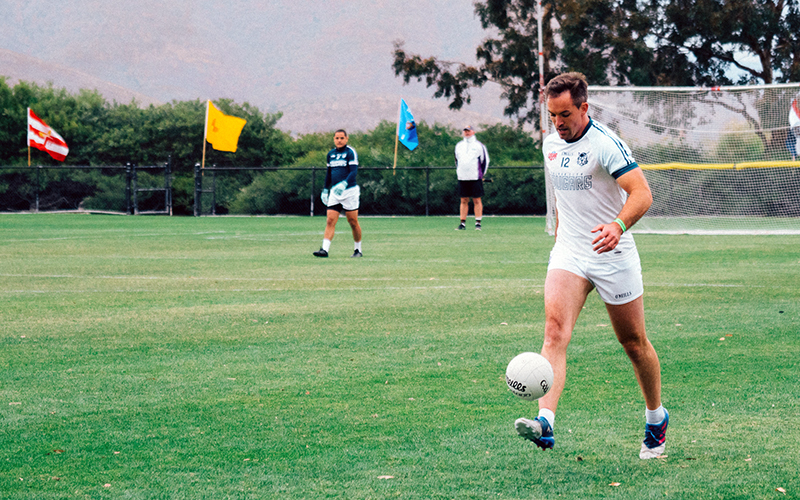 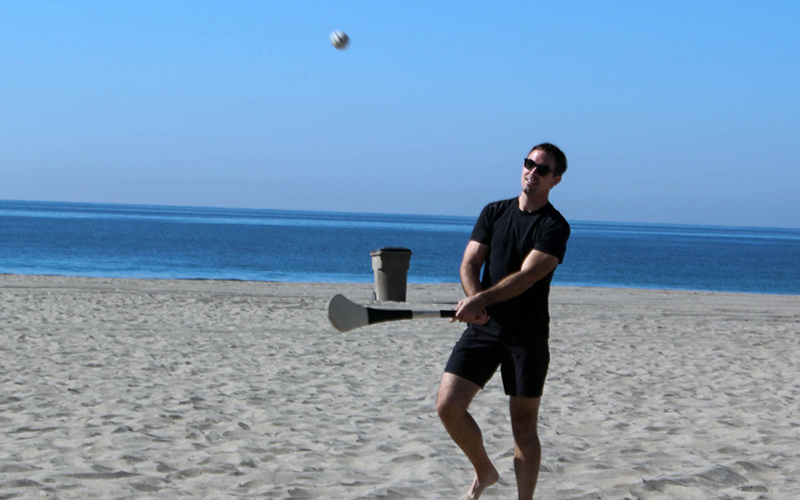 The sun-drenched beaches of Santa Monica are a far cry from the drab gray of Dublin, but Tomás Brady is happy he can continue to play the traditional Gaelic games he grew up with. (Photo by Grayson Schmidt/Cronkite News)

WEST HOLLYWOOD, Calif. – Tom Brady sat in a coffee shop off Fairfax Avenue, completely unnoticed. People walked past without batting an eye at his athletic physique, or pausing to listen to his distinct voice. If Brady minded, he didn’t show it.

Instead, he smiled and reminisced about last season’s championship win. He acknowledged his game isn’t what it was several years ago, but said he can still hold his own.

After all, Tom Brady did play at the top level in Ireland.

This Tom Brady doesn’t have a multimillion dollar NFL contract. He’s never graced the cover of “GQ” or hosted Saturday Night Live. Tomás Brady is 32, originally from Dublin. He works in real estate development and is a Gaelic footballer for the Los Angeles Cougars.

With an influx of Irish immigrants in the 1980s and ’90s came a wave of Gaelic sports in Southern California. The games served as a way to preserve culture and create a community of connected Irish immigrants, but as that initial wave aged-out of competition, a new struggle has emerged. To retain culture, clubs like the Cougars have understood that they must grow – which means diversifying and drawing non-Irish players into the sports.

“(Back home) they think it’s amazing because you’re keeping the game alive in other parts of the world,” Brady said. “We’re spreading the Irish culture.” 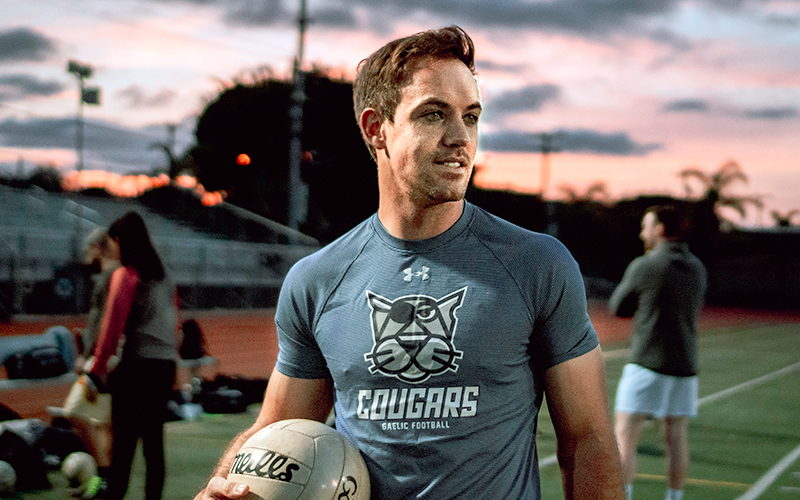 To understand both hurling and Gaelic football, one must understand the relationship between the two. It’s easiest to think of them as track and field. Two types of games or competitions, different players that can overlap but don’t always, yet still one club.

Gaelic football is sort of a rugby-soccer hybrid where teams of 15 players dribble, pass and kick a volleyball – or what looks like a volleyball – up the pitch and then kick it into a soccer goal or through football goalposts.

In hurling, which actually is a precursor to hockey, players use paddles called “hurleys” – basically a cross between baseball bats and hockey sticks – to pass a ball to other players and ultimately hit it through goalposts.

Both games seem ancient compared with major American sports. The first references to Gaelic football go back to the 1600s, and hurling is estimated to have originated more than 3,000 years ago, according to the U.S. Gaelic Athletic Association, the governing body of Gaelic sports in the U.S.

“You move to a relatively large city,” Brady said, “there’s a team and instantly you’re catapulted into like 30 guys that are like-minded, that have connections. It’s a great network to go for a beer with, and I honestly can’t think of any other sport and organizations that have those tentacles all over the world.”

In Ireland, football matches are televised, and championships can sell out stadiums seating 50,000-plus. During his time with Dublin County, Brady won two Leinster Senior Football championships, three Allianz National Football League titles, and one All-Ireland Senior Football Championship. He’s only been in the U.S. a little more than a year and already has helped lead the Cougars to their first U.S. Gaelic Athletic Association National Championship, after only five years of existence.

Unlike the police escort players get in Ireland, Cougars players went unnoticed as they suited up an hour before match time at a local high school football field.

Although it may seem like a downgrade to go from being a household name to playing in relative obscurity, Brady didn’t appear to view it as such.

“Funny enough, the standard is quite good out here,” Brady said with a smile.

Los Angeles Cougars President Ronan Wall has been in LA for four years and has been an integral part in bringing Gaelic football back to the city. (Photo by Curtis Petraglia/L.A. Cougars GFC)

Gaelic sports are represented throughout Southern California, for both men and women, in L.A., Orange County and San Diego. L.A. is the youngest, San Diego was revamped in the late 1990s, and Orange County was started in 1979. Each area has its own story and history, but the one trait they all share is the need to expand the games beyond people of Irish heritage.

That mentality is what has allowed for clubs like L.A. to grow exponentially in five years. Ronan Wall, Cougars president, said the club mandates that at least 50% of players are non-Irish.

“The days of being a team of Irishmen are slowly fading,” he said.

The L.A. Cougars have two men’s teams and one women’s team – Mulhollands GFC. Although the goal is to someday offer hurling as well, Wall said the club is focused on building the football side of the club first, which has a player base of about 65 footballers.

In Orange County, the Wild Geese have about 40 active registered members, with players from Ireland, the U.S., Jordan, Australia and Mexico.

Wogan, a native Dubliner, has been playing for the Geese, which is both a hurling and Gaelic football club, since he and his wife moved to Los Angeles in 2016. A self-proclaimed “hurling addict,” he made sure that a set of hurleys were the first things he packed before he left for America in 2011. Since then, he has made it his mission to continue to play and expand the sport of his homeland, but when he first moved to L.A., the Geese were strictly a football team.

“I brought down literally all the hurleys that I had – I’ve developed a bit of a collection – and they (his teammates) were all really good,” Wogan said with a laugh. “Some of them were like, ‘Oh I haven’t played in 15 years,’ and I’m like, ‘Are you sure?'”

Wogan runs the website playhurling.com, which also has a social media presence and YouTube channel. He wants to spread the game in Southern California, but he has his sights set on national growth.

“My number one priority is to highlight something that should be (highlighted),” Wogan said. “I’m obviously going to help out the L.A. growth, because I just live for this stuff, but a top priority is to promote awareness.”

With other clubs trying to reach non-Irish athletes, Setanta San Diego GFC decided to use what the area provides and have started recruiting members from the Navy presence in San Diego, said Leonard Cox, chairman of Setanta.

“You’re all just trying to keep your club going,” he said.

The non-Irish influence has become crucial for these clubs, and some of those players have started taking on a more serious role in recruiting.

Tracey Rivera is a prime example of the influence a traditional “outsider” can have. She’s not from Ireland and has no Irish heritage, but the San Diego native has moved her way up from a new recruit, with no knowledge of that game, to a board member of the largest geographical division in the USGAA.

“I think that games offer so much to athletes, and to the community,” said Rivera, who started playing Gaelic football more than 20 years ago. “The community involvement that happens, and that pride in your community, is such a powerful thing.”

Rivera, a lifelong soccer player, got into football as a way to fill an athletic void. She was at a point where she still wanted to compete, but there weren’t a lot of competitive adult soccer leagues to choose from.

Then, a small flyer in a Big 5 Sporting Goods changed things. Rivera joined the upstart Na Fianna, Gaelic for “the Warriors.”

“It was easy to just fall in love with the game and then the people in the community,” Rivera said. “It was a great fit for my life and really helped shape who I became.”

Rivera passed that newfound love onto both her kids, who played Gaelic football for the local clubs in San Diego while playing traditional high school sports; Rivera said they excelled at the latter due to the former.

“The game is so free-flowing so you have to make decisions quickly,” Rivera said. “(The sports) makes you that much better to play other sports, I think, and I’ve seen that with my own children and with other children in the league.” 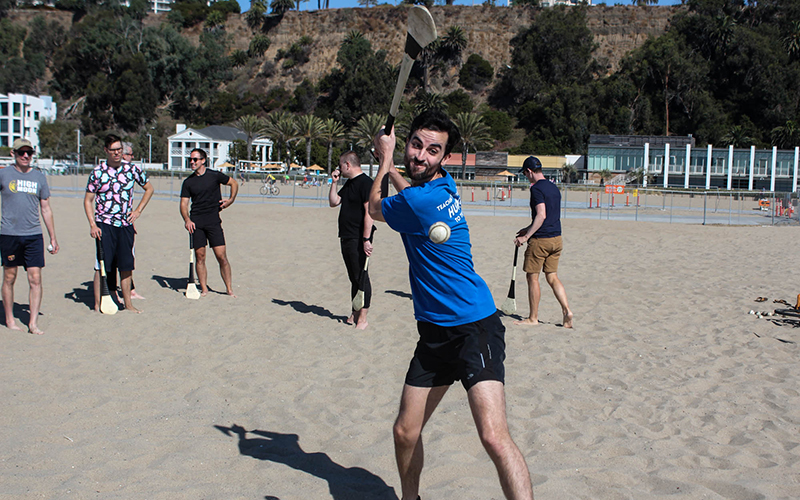 David Wogan,a Dublin native and hurler for the Orange County Wild Geese, won the L.A. Cougars first ever “long puck” on the beach. Wogan has been in Los Angeles for three years, and one of the first things he did on arrival was join a hurling club. (Photo by Grayson Schmidt/Cronkite News)

On a sunny and breezy Sunday morning, Tom Brady started swinging a hurley on a sun-soaked Santa Monica Beach, a far cry from the slate skies of Dublin. This particular weekend in November kicked off Ireland Week in Los Angeles, and several lads from out of town took off their shoes to walk out onto the sand for the L.A. Cougars first “long puck” on the beach.

In hurling, hitting the ball is known as “pucking the ball,” so the competition to see who can hit it the farthest is called long puck. It’s a little like a home-run derby.

After a few practice swings, Brady lived up to his reputation, quickly showing himself to be the man to beat – and then Wogan beat him. Some players hit the ball 20 yards; others – including Brady and Wogan – hit it close to 100. Some had never tried before, some said they were a little rusty, others mentioned jet-lag.

Curious onlookers were greeted by signs that read “We’re playing hurling” with a link to playhurling.com. It’s another effort to draw in more people to hurling, and as someone who works with search engine optimization for a living, Wogan already knows how to attract followers.

But on this particular day, signs probably weren’t necessary. The hurling seemed to be its own attraction. Following an absolute bomb (to put it in baseball terms) by Wogan, an L.A. County lifeguard truck pulled up and a stocky yet athletic lifeguard exited.

“That is awesome,” he said. “I’ve always wanted to try this.”