Low uranium prices make it difficult to justify operating the Canyon Mine, which opened in 1986 and has produced no ore. (Photo by Jake Eldridge/Cronkite News)

The Canyon Mine was approved in 1986 but has not produced any uranium. It was grandfathered when a 20-year mining ban around the Grand Canyon was enacted in 2012. (Photo by Jake Eldridge/Cronkite News) 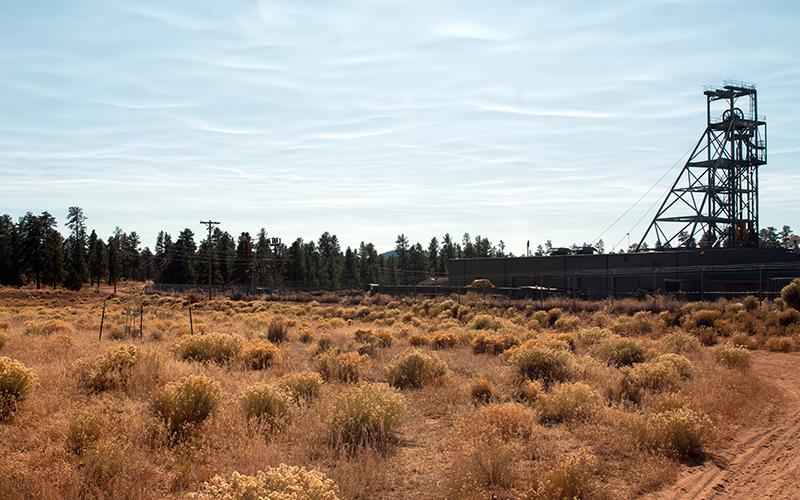 As global uranium demand has dropped, mines in free-market economies haven’t been able to compete with state-subsidized mines in Russia and China, says Curtis Moore of Energy Fuels, which owns the Canyon Mine. (Photo by Jake Eldridge/Cronkite News)

TUSAYAN – In a clearing on Forest Road 305, about 15 miles south of Grand Canyon National Park, an enormous steel headframe towers beside a retention pond. Beneath the headframe, a mine shaft drops 1,400 feet into the earth.

This is the Canyon Mine, which opened in 1986 to extract uranium. A handful of employees work here during the week, but the mine has not produced a single ounce of the mineral, which is used to produce weapons and keep the country’s 96 nuclear reactors operating.

As demand for uranium has plummeted, the price is too low for U.S. companies to compete with other countries and still turn a profit. Uranium is processed in just seven facilities in the U.S., including the White Mesa Mill in Utah.

Curtis Moore, vice president of marketing and corporate development for Energy Fuels in Lakewood, Colorado, which owns Canyon Mine, said the mine’s inactivity isn’t too concerning.

“We’ve never produced in Canyon Mine,” he said. “State owned enterprises from Russia and China, they’ve been, we would argue, artificially lowering the price of uranium to put some of their free market competitors out of business in the United States, Canada and Australia.

“The price isn’t quite there. It’s close. Canyon Mine is probably the lowest cost uranium mine in the United States.”

The U.S. imports most of the uranium it uses because it’s cheaper to buy from other countries, including Canada. The Trump administration wants to change that and is looking into creating quotas on domestic use. It’s waiting on recommendations from the Nuclear Fuel Working Group, which the White House set up in July.

This could also affect the temporary ban now in place on uranium mining in and around Grand Canyon, as well as a bill by U.S. Rep. Raul Grijalva, D-Tucson, that would permanently ban uranium mining on about 1 million acres around Grand Canyon National Park. The ban, which was passed by the full House, would allow the Canyon Mine to operate because it existed before the temporary ban was enacted in 2012.

A similar bill was introduced into the Senate on Dec. 19 by Sen. Kyrsten Sinema, D-Ariz. The major difference is that Sinema’s bill would require a study on the availability of uranium in the U.S.

Clark Tenakhongva, the vice chairman of the Hopi Tribe, said his people have been dealing with the fallout of uranium mining for the past 100 years.

“It contaminates once dug up from its natural state of where it’s at, it’s always something that contaminates the groundwater,” Tenakhongva said. “Groundwater then goes throughout the whole region and whatnot and sooner or later, it then affects not just only the people but the environment around their animals.”

Environmental activists and the Hopi Tribe are concerned that the Canyon Mine could contaminate groundwater and, ultimately, the water in the Grand Canyon. They also want Grijalva’s ban enacted and Canyon Mine’s grandfathered status eliminated.

Amber Reimondo, the energy program director for the Grand Canyon Trust, said uranium mining could result in contaminated water in the Grand Canyon and that Energy Fuels can’t confidently say that it won’t. 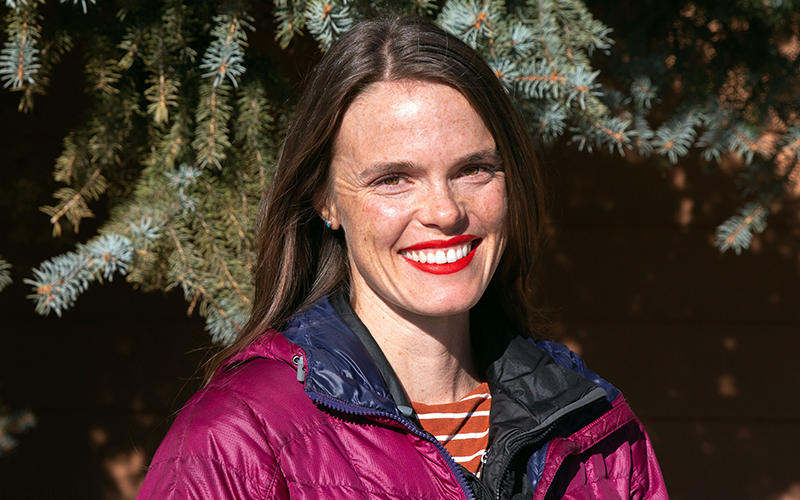 “The geology in this region is a karst system, which means that it’s fractured and that you can think of it like a system of pipes where water starts up at one point can flow in multiple different directions and multiple different speeds and it’s not really well-understood,” Reimondo said. “So to say that a uranium mine won’t impact the Grand Canyon or other water sources, they really can’t say that for certain right now.”

Moore, however, said Canyon Mine does not pose a risk to the water in or around the Grand Canyon.

“The water aquifer underneath Canyon Mine is an isolated aquifer that isn’t connected to the Grand Canyon or any other water sources,” he said. “It’s located underneath impermeable rock that locks in the water. Even if it did get through an old drill hole, it’s located downhill from the Grand Canyon, so it would flow the opposite direction (south of the Canyon).”

Why uranium is sagging

As of 2018, U.S. nuclear power plant owners and operators imported roughly 90% of their uranium from Australia, Canada, Kazakhstan, Russia and a handful of other countries. Total production of uranium concentrates in the U.S. was 1.6 million pounds in 2018 – 33% less than in 2017.

“Uranium is a critical mineral,” he said. “It’s used for the production of nuclear energy, which I would say is our best way to produce clean, no carbon (emissions) electricity, and it’s used by our military and defense, it fuels our submarines and aircraft carriers. So there’s a national security tie to uranium.” 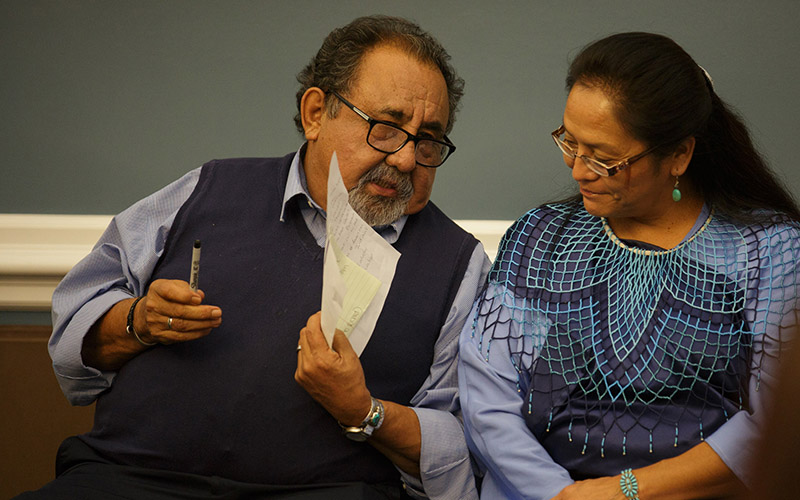 U.S. usage of uranium has decreased in recent years, part of a global decrease in the wake of the 2011 meltdown of Japan’s Fukushima Dai-ichi nuclear plant after an earthquake and tsunami. As nations sought alternative sources to nuclear power, the uranium market crashed.

Fukushima was just the most recent incident that has created a boom and bust cycle for uranium mining. Since the introduction of nuclear power in the mid-1950s, a string of nuclear power plant problems have nearly destroyed the industry and the global interest in uranium.

Although the impacts of U.S. reliance on foreign uranium aren’t clear, Energy Fuels and Ur-Energy Inc., another uranium producer, in 2018 petitioned the U.S. Department of Commerce, complaining that subsidized foreign uranium is undercutting their business.

The Commerce Department concluded that the federal government should implement quotas for domestic uranium mining and production, which it recommended to Trump. However, Trump opted to have the Nuclear Fuel Working Group take 90 days to prepare its own recommendations based on pressure from nuclear power plant operators who expressed concern over the financial fallout of the potential quotas.

The working group was set to make recommendations in October but was granted a 30-day extension by Trump. The group has not reported as of Dec. 23, and there has been no additional information.

Although finances are the main concern for nuclear power plant owners, conservationists are concerned about the environmental impact of renewed uranium mining near the Canyon. The mission of the Grand Canyon Trust is “to safeguard the wonders of the Grand Canyon and the Colorado Plateau, while supporting the rights of its Native peoples.”

“This is an intrusion,” Clark said. “So on the surface, it’s what you see. But the real important problem is the long term contamination and risk to the groundwater.” 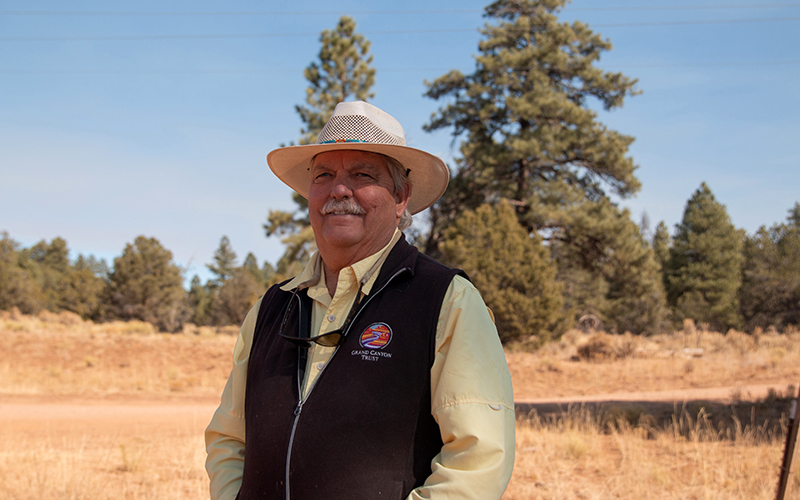 Roger Clark, program director for Grand Canyon Trust, is a passionate conservationist who is concerned about the potential hazards posed by the Canyon Mine, about 15 miles from the South Rim. (Photo by Jake Eldridge/Cronkite News)

Clark also said the evaporation pond that holds water pumped from the shaft does not meet Environmental Protection Agency safe water standards, which he said could harm wildlife.

“The Grand Canyon Trust uses EPA drinking water standards to claim the water is contaminated, which by that standard is technically true, but that’s true for most untouched water sources,” he said. “The Little Colorado River doesn’t meet those standards either, but you wouldn’t go drink directly out of that.”

The amount of uranium present in that water, Moore said, is comparable to the parts per billion that naturally occurs in water sources in the area, and that many of the environmental concerns surrounding uranium mining are based on incidents from a bygone era.

“If we were even doing one tenth of the things that some of those environmental groups claim that we’re doing, we would have been shut down long ago,” Moore said.

From the late 1940s to the mid-’60s, 4 million pounds of uranium ore were extracted in the U.S., without safety codes and understanding of the consequences. Mine shafts had little to no ventilation, despite being as deep as 1,500 feet. The miners breathed in the dust, ate lunch in the mine and even drank water coming out of the rock. This led to high quantities of radon in their lungs, a radioactive gas that greatly increases the risk of lung cancer.

EPA regulations now limit the fallout from uranium mining. In addition, the Clean Water Act and the Clear Clean Air Act feature sections or limitations related to the hazardous materials that can come from uranium processing, although these regulations were put in place after the damage had already been done.

As for Canyon Mine, Energy Fuels has the legal authority to begin mining, but the low prices would make it an unprofitable venture, despite the low operating costs.