GLENDALE – With this decade almost finished, Clemson coach Dabo Swinney started to reflect on an era with his football program he still and always will describe as “Little Ole’ Clemson.”

After a 6-7 season in 2010, Swinney said at media day before Saturday’s PlayStation Fiesta Bowl that much money had probably been bet on him not still being at Clemson. He is, of course, and he recalled the message that he gave to the Clemson faithful following his second full season as a head coach in college.

“I said in 2010, after the six-win season, ‘We are fixing to have the winning decade in Clemson history,'” Swinney said.

Clemson has had that dominating decade, and the No. 3 Tigers (14-0) finished it at State Farm Stadium with a memorable 29-23 win against No. 2 Ohio State (13-1) at the Fiesta Bowl in a College Football Playoff semifinal showdown. It was the first game between top 13-0 teams in college football history.

With the win, Clemson extended its longest winning streak in the nation to 29 games while snapping the 19-game winning streak for Ohio State, which was the second longest in college football previously.

After Swinney delivered that message, Clemson hasn’t looked back or slowed down with success, which includes a 35-31 win with quarterback Deshaun Watson against Alabama in the 2016 season to earn its second national championship (1981).

Last season, Clemson won 44-16 against Alabama for its second College Football Playoff national championship and completed the only 15-0 season in college football history.

“I just know when two great teams get together, it comes down to a few plays, and it did again (Saturday),” Ohio State coach Ryan Day said. “But, this was a very strange game. I thought we played well. Clemson, give them credit. They have a really good team, and are the defending national champions.

“… But again, I am very, very disappointed we weren’t able to win this game.”

Although the Buckeyes squandered an early 16-0 lead, Ohio State had a final chance to win against the Tigers after Clemson scored a late touchdown and 2-point conversion to take the lead with 1:49 left.

Ohio State drove down the field and had the ball on the 23-yard line with 43 seconds left in the Fiesta Bowl. Ohio State sophomore quarterback Justin Fields had an open wide receiver in the end zone, but Clemson redshirt junior safety Nolan Turner made the game-sealing interception.

INTERCEPTED! What a finish! #CFBPlayoff pic.twitter.com/7u8sU3d2IA

“It was the look we wanted,” Fields said. “Then, with (sophomore wide receiver) Chris (Olave) it was basically just a miscommunication. That happens in life, and you really can’t do anything about it now. Just have to move on.”

Although he acknowledged Ohio State wasn’t good enough, Day said he did believe that the Buckeyes played well enough to win against Clemson.
“We were right there,” Day said. “It wasn’t like we didn’t didn’t play hard, that our guys didn’t execute well or we didn’t make big plays. We did all of those things, and we just came up short in the end. We were right there all the way to the end. That is the way (life) goes.”
Clemson started extremely slow on offense, but sophomore quarterback Trevor Lawrence provided a much-need spark with key plays, including with his speed on a stunning 67-yard touchdown run just before halftime.

Before the game, Ohio State junior defensive end Chase Young talked about how dynamic Lawrence can be with his ability to run. Lawrence said he worked extremely hard in the offseason to become faster and stronger for the running game. 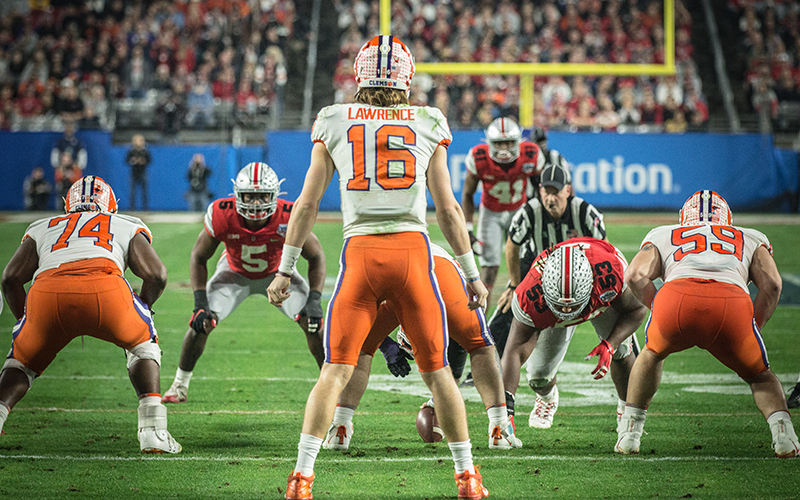 Clemson sophomore quarterback Trevor Lawrence helped the Tigers in many ways, including with his legs. (Photo by Nathan Hiatt/Cronkite News)

That sent Clemson to the locker room with a momentum boost, which it used after halftime along with its playoff experience to ultimately finish on top and prove itself against the Buckeyes.

After Clemson took its first lead after halftime, Ohio State responded with a touchdown early in the fourth quarter to regain the advantage at 23-21. As time winded down, Clemson hadn’t responded and the Buckeyes were 2 minutes, 55 seconds away from victory.

Before the drive, Swinney said that Lawrence took over the huddle.

Clemson started to drive down the field, and then the big-time moment happened. It was a play that Clemson had set up the entire game with Lawrence making an impact in the running game.

Lawrence ran the run-pass option play that had Clemson junior running back Travis Etienne leak out into the middle of the field behind the defense. It worked to perfection and Clemson scored a 34-yard touchdown to take the late lead and converted the 2-point conversion.

“Honestly, I wasn’t a big fan of the play in practice because it is tough if the defense doesn’t really bite on it,” Lawrence said. “If that safety comes down hard, it really takes it away.”

Clemson talks often about its culture and “never get up” attitude. That mentality helped junior running back Travis Etienne log a 53-yard receiving touchdown in the third quarter to give Clemson its first lead. (Photo by Nathan Hiatt/Cronkite News)

Swinney chimed in, jokingly asking, “Is that why you threw it in the dirt two or three times (in practice)?”

“I felt like it was good, though, because of how well we set it up throughout the game and thought it was going to work then. Throughout the week, though, I was like, ‘I don’t really like this play.’ In the moment, we had a chance.”

No. 3 Clemson (14-0) plays No. 1 LSU and senior quarterback Joe Borrow – the Heisman Trophy winner – for the National Championship on Jan. 13 in New Orleans. As a new decade starts, though, Clemson has a chance to become the first program to win back-to-back titles in the College Football Playoff era.

Swinney continued to reflect on this ultra-successful decade as a reporter asked whether he dreamed this was possible in his message to the Clemson faithful in 2010.

“I dream big and actually, we are a little short,” Swinney said. “I dreamt a little bit bigger. We missed a couple (championships), but we have had a great run. It has been an unbelievable decade. What we have done on the field and off the field. It gets lost a lot of times what we have done academically. … We have stayed committed to the purpose of our program, and it has been a great decade.

“But as I told them, we have got a windshield mentality in our program. That is why we are consistent. It is always about what is next. Our dreams are always greater than our memories and that is just the way it is.

“So, we are just getting started. The best is yet to come.”