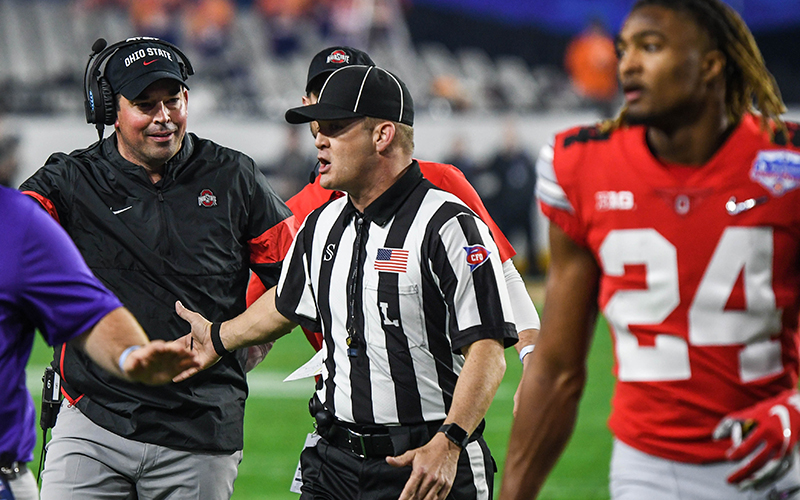 Ohio State coach Ryan Day (left) expresses his displeasure to the referee after a targeting penalty was called on cornerback Shaun Wade (right) in the Fiesta Bowl. (Photo by Brady Vernon/Cronkite News)

A second-quarter sack from Buckeyes slot cornerback Shaun Wade on Clemson quarterback Trevor Lawrence appeared to put the lifeless Tigers offense in another punting situation. Instead, the news given to Day was that after review, Wade used his helmet and needed to be flagged for targeting.

The call extended the drive that eventfully ended in a Clemson touchdown. After the targeting call the Tigers outscored the Buckeyes by 22 on their way to a 29-23 victory in the PlayStation Fiesta Bowl at State Farm Stadium and a spot in the national championship.

“We had all the momentum,” Day said. “Then we got the sack and the penalty was called on Shaun. The momentum kinda swung right there.”

Lead referee Ken Williamson said replay initiated the call. From there they were able to determine the explanation for the call.

“This was a crown-of-the-helmet targeting foul,” Williamson said postgame. “So it did eliminate a lot of other factors. Initial contact was with the crown of the helmet. Then he wrapped up for the tackle. So at that point, targeting was properly called.”

The call fueled Lawrence once he heard it. He had to miss a play because the trainers had to tend to him on the field. Lawrence became the spark plug for Clemson. He led the drive after the targeting call and scored on a 67-yard rush the following possession to close the halftime deficit to two.

“I didn’t know it was targeting, either. I thought it was – I don’t know if it was a three-and-out. We would have had to punt. So, I was kind of pissed off,” Lawrence said. “We’re off the field and I see it is targeting, then had to sit out one play, and just came back. We knew we had to score there. 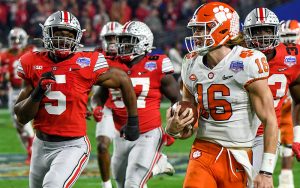 Runs like this 67-yard one by Clemson quarterback Trevor Lawrence was key to the Tigers’ comeback victory. (Photo by Brady Vernon/Cronkite News)

“The game was getting a little out of hand. Just had to put a drive together, and we can take anything we can get. That targeting call was huge. Being able to finish that drive and score and then the next drive put it in again really gave us some momentum going into halftime.”

As Wade, who was disqualified due to the targeting ruling, left the field, the sea of scarlet that represented the Ohio State faithful expressed the same frustration felt by Day. The first-year coach, as most leaders of a team would, looked for internal reasons to reason the loss.

Day pointed to the Buckeyes’ failure to convert any of their three red zone opportunities into touchdowns, the miscommunication of quarterback Justin Fields and wide receiver Chris Olave on Clemson’s game-sealing interception and Ohio State’s inability to stop Clemson running back Travis Etienne, who finished with 134 yards and three scores.

All of those played a role in the Buckeyes’ lone loss of the season. But the targeting call wasn’t the only time Ohio State felt it was waging a battle against the defending national champions and the replay system.

The previous drive before the call that energized Clemson’s comeback win, Ohio State lost points to replay. Buckeyes running back J.K. Dobbins had caught a 16-yard touchdown to put his team up 19 points until it was ruled off after another look.

The headset Day pounded with one hand after the second-quarter penalty received an even bigger blow in the third quarter. With the lead surrendered, the Buckeye defense forced a fumble that was scooped and scored. The pendulum of momentum that had swung back to Ohio State moved back toward Clemson just as quickly after another replay review ruled the fumble an incomplete pass.

The part that frustrated Day the most was all three plays changed from their initial ruling on the field.

“When we look back on it, it’s going to be overwhelming how those game-altering plays happen in a game. You need those to go beat a team like Clemson here playing in a semifinal game,” Day said. “You need one or two plays. To miss a couple of them, that hurts you.”

Day suffered his first loss as a head coach on Saturday. The way it happened made it tougher to swallow. He believed his team played well enough to win. He liked the way his team responded to adversity. However in a game of inches, good enough isn’t always enough.

“In a game like this where the margin of error is so tiny, one play can alter the game.”