That changes on Saturday night at State Farm Stadium in Glendale, where the hype and buzz surrounding No. 2 Ohio State (13-0) and No. 3 Clemson (13-0) has brought significant attention to the Fiesta Bowl and Arizona this season.

“It is going to be pretty special,” Ohio State junior running back J.K. Dobbins said. “… This is one for the ages for sure.”

For the Fiesta Bowl, too, which welcomes the economic shot in the arm for the state.

“It is a big game every year, but the (College Football) Playoff just brings a higher expectation and more interest into the game,” Fiesta Bowl executive director Mike Nealy said. “… It is going to help with the economy. It is probably going to be a $150 million impact to the community and the economy.

“That is why we have this game, and we are really proud to present it. The extra dollars with the extra hotel rooms, the extra flights that come in and more, that all helps with the economy.”

The bowl game and related events have generated approximately $2.75 billion in economic impact during the past 12 years, bowl officials said recently. The Fiesta Bowl is guaranteed at least two more CFP semifinal games, in 2022 and 2025.

Clemson brings a 28-game win streak into the Fiesta Bowl, which is the longest in the nation. Ohio State is next with a 19-game streak. 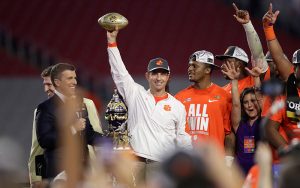 The presence of coach Dabo Swinney and defending national champion Clemson has added to the high-profile nature of the Fiesta Bowl, which the Tigers won in 2016. (Photo by Jamie Squire/Getty Images)

“It is hard to win 28 games against air,” Ohio State coach Ryan Day said. “I think it goes to show you the stability (Clemson coach Dabo Swinney) has had in his staff there and their ability to stay focused throughout that time, because all it takes is a couple of times where the ball bounces one way or the other, and you lose a game.

“… Nothing but respect for what they have done during this run.”

In his first full season as a head coach – after he replaced Urban Meyer late last season – Day acknowledged that he doesn’t want this season with this team to end.

“I love this team,” Day said. “I love these kids. I love this coaching staff, and what (this team has) done together as a group. But just personally what they have done for me in my first season as a head coach, they will always have a place in my heart.”

At State Farm Stadium, though, something has to give, and either the Buckeyes or the Tigers will advance to the College Football Playoff National Championship Game on Jan. 13 in New Orleans.

With that, Ohio State and Clemson each understand the challenge at hand, and players on both teams expressed excitement to accept that challenge.

Ohio State superstar and junior defensive end Chase Young has seen on film just how dynamic Clemson sophomore quarterback Trevor Lawrence can be when given time to throw the ball in the pocket.

Lawrence has shown the ability to find talented wide receivers Justyn Ross and Tee Higgins, especially in the 44-16 win against Alabama last season to finish as the only 15-0 team in college football history.

This season, Lawrence has thrown for 3,172 yards and 34 touchdowns, as well as rushed for seven touchdowns. Lawrence also has junior running back Travis Etienne, who has 1,500 rushing yards and 17 rushing touchdowns this season, to give the ball.

Young, who has 16.5 sacks in 11 games this season, knows he and the Buckeyes must bring pressure to Lawrence in the pocket. Lawrence also knows that things won’t be easy against this Ohio State defense as he said the Buckeyes have “no weak link” defensively.

“I feel like that with all quarterbacks, but definitely with (Lawrence),” Young said. “Just because if you make him comfortable, and if he can be patient with reading his keys, he is going to drop dimes. We definitely have to stay on him and try to pressure him as much as we can, so we can try to get him a little jittery back there. So he can’t really focus on all of his key reads, and he will definitely have to pay attention to us coming off the ball, too.”

Although everyone knows about Young on the defensive line, Clemson coach Dabo Swinney said many people seem to focus on the skill players with quarterbacks, running backs, wide receivers, linebackers and defensive backs.

Swinney talked up the upfront matchup that he believes will be an epic battle.

Although the 2016 matchup isn’t much more than a reference point for most, some current Buckeyes still remember that game, which Ohio State lost 31-0.

“(You) still have that dirty taste in your mouth, so I feel like the seniors (now), they felt it,” Hill said. “We are just trying to show the young guys the way and show them what they did to us in 2016 and what kind of game it is going to be.”

Although multiple Clemson players talked about impact, Dobbins expressed a goal to make a significant impact for Ohio State, which would help Hill with redemption.

This season, Dobbins has 1,829 rushing yards and 20 rushing touchdowns in addition to two receiving touchdowns.

“I feel like I could have had a better year, and a lot of people will probably look at me crazy for saying that,” Dobbins said. “But, I do and I am just going to try to keep improving and hopefully Saturday I can have the best game. I haven’t had my best game, yet. I feel like it hasn’t came out this year, yet.”

Despite 13-0 records and playing in the College Football Playoff again, Ohio State and Clemson both expressed feeling a lack of respect, providing some fuel for this game.

Ohio State said it felt disrespected for not being projected to win the Big Ten in the preseason poll and for its drop from No. 1 to No. 2 in the final rankings.

“If you want respect, go beat the defending national champs, who have won 28 straight games,” Day said. “… We have an opportunity to go and win the game.”

Clemson has used this mindset throughout the season as it felt disrespected for not having a higher ranking as the defending national champions.
“It gives us a little fuel and something to work for with people thinking we are the third best team,” Lawrence said. “That is how it is going to be until we prove it. We have the opportunity.”

At this point, all that remains is the final score.