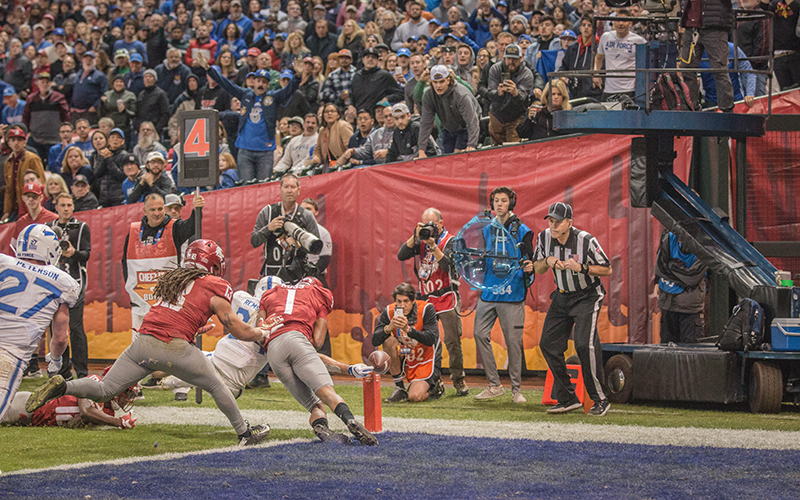 Air Force junior running back Kadin Remsberg stretches out for the game-sealing touchdown run in the Cheez-It Bowl. (Photo by Nathan Hiatt/Cronkite News)

PHOENIX – As the Cheez-It Bowl approached, questions swirled about the dynamic of having a triple-option attack of Air Force face the air raid of Washington State.

Air Force set the tone early on Friday night, starting the game with a goal-line stand and answering with a vintage 20-play, 98-yard drive that took 12:23 from the clock.

After a late touchdown, Air Force won 31-21 at Chase Field, finishing with an 11-2 record after back-to-back 5-7 seasons.

The Falcons hadn’t played in the postseason since 2016.

That game was the Arizona Bowl in Tucson, which Air Force won 45-21 against South Alabama. Air Force coach Troy Calhoun said it meant a lot to win a bowl in Arizona again, especially with the military contingent in the state.

“I will say this about this state, just how receptive they are to our service members, whether it is at Davis-Monthan (Air Force Base), down at (Fort) Huachuca and more and, then, certainly here on the west side of Phoenix,” Calhoun said.

“This is a remarkable area. The patriotism and the support that they provide to our service members, that is heartfelt. It truly is for our enlisted crew and our officers, but probably every bit would be the family members that come from the Air Force.”

Air Force junior outside linebacker Grant Donaldson said the team was definitely motivated to reach the 11-win milestone in this game. Late in the second quarter, Donaldson forced a fumble on a strip sack, which four plays later equated to a touchdown.

“We just went into this game, just like every other game, wanting to try to go 1-0,” Donaldson said. “In the end, after the weeks pile up, 11 wins is pretty nice.”

Washington State wasn’t the only Pac-12 opponent that Air Force defeated this season, which certainly says something about this Air Force squad.

Air Force won 30-23 against Colorado in overtime with a 25-yard touchdown run from junior running back Kadin Remsberg early in the season.

“I think it just shows that we are a great football team, and the work that we put in, it is fruitful,” Remsberg said. “A lot of us do have a chip on our shoulder, I think, and to be able to have this season go the way it did … it is an amazing feeling.”

Remsberg was the hero against Washington State, as well, as he just stretched the ball into the endzone, scoring a 3-yard rushing touchdown on 4th and goal with 3:50 left to seal the win in Phoenix.

“My coaches are telling me getting the edge is probably the best thing to do and try to use my speed,” Remsberg said. “But, I had my blockers out there, and seeing these guys doing their best to get me on the perimeter, I knew I had to score. I was going to do everything I could to get in the end zone.”

Remsberg finished with 26 carries for 178 yards and that touchdown, and he eclipsed 1,000 yards rushing for the season with 1,050 yards and eight touchdowns.

With that, Air Force dominated the time of possession as it held the ball for 43 minutes, 24 seconds versus 16:36 for Washington State. That certainly isn’t what Washington State coach Mike Leach wanted to happen or expected, though he acknowledged his defense improved after halftime.
WSU senior quarterback Anthony Gordon finished with 351 passing yards and three touchdowns and Brandon Arconado had 11 catches for 167 yards and a touchdown.

That wasn’t enough, though.

“If you can disrupt their offensive line, it is like any offense,” Leach said. “If you disrupt the offensive line, then you have more opportunities. I didn’t think we did that. I thought we spent too much time drawing moral victories from the fact we tackled somebody and they didn’t get an explosive play. Well, that is not enough.

“Then, we probably did some of the same things on offense as we were marching downfield and it was coming pretty easy, which it was, then you gotta put it in. That is all that counts. Did we score or did we not? Or did they score or did they not? Then, in the meantime, we let them eat the whole clock up because of our inability to stop them, which makes each series precious. Then, offensively we squandered opportunities that would have allowed us to win this game.”