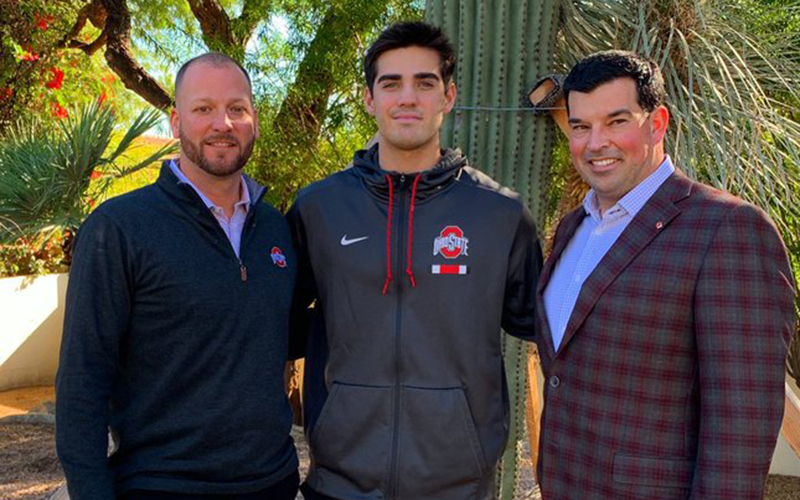 SCOTTSDALE – Ohio State coach Ryan Day has made the long trek from Columbus to Arizona before.

Not to field endless questions from the media inside Scottsdale’s Camelback Inn for the Playstation Fiesta Bowl Media Day. Not to work on final details for the highly anticipated College Football Playoff semifinal against Clemson.

And as much as he wishes, not to work on his golf game. Day has made himself familiar with the Scottsdale area because of Chaparral quarterback Jack Miller.

Miller, rated as a four-star pro-style quarterback by multiple recruiting sites, isn’t just another talked-about recruit. Plenty of spectators that have seen Miller play rave about his talent. But the onlookers likely don’t possess the eyes of one of the top tier talent evaluators in the country.

Day, generally regarded as one of the top two quarterback gurus alongside Oklahoma coach Lincoln Riley, continuously offered different aspects of Miller’s game that made him worth the journeys.

“He was a guy we saw throwing early on in camp. He was maybe 15 years old when we first saw him. We saw a really talented arm,” Day said. “As he’s matured, you can really tell he’s got a better feel for what it means to diagnose coverages, defense recognition that types of things toward his football IQ.

“He’s had some really good games this year. It was a combination of size, accuracy, the ability to throw the ball and the makeup. (He) comes from a really great family.” 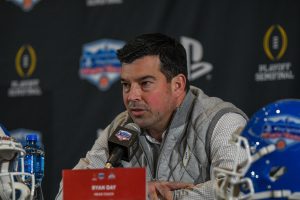 After Miller verbally committed to the Buckeyes on July 1, 2018, he made it official on December 18, the first day of the early signing period. That much time pledged to Ohio State meant a lot of visits to Columbus and a few stopovers inside the Millers’ home from Day and Buckeyes’ passing game coordinator MIke Yurcich. The pair of coaches checked in on Miller one last time earlier in December, racking up the frequent flyer miles to Phoenix.

Before Miller steps on campus as an official student-athlete, he’ll have created a better connection with his head coach than most incoming freshmen.

“We’ve gotten super close to one another,” Miller said. “Whether it’s been me going up there or talking over the phone. He’s a super good coach and an even better guy. I’m really excited to play for him.”

As Day mentioned Miller’s many attributes, he forgot to say loyalty. When Miller originally committed, Day was only the Buckeyes’ offensive coordinator under then-coach Urban Meyer. Despite Meyer’s retirement that led to Day’s promotion, Miller never wavered from his commitment.

Even after Ohio State signed four-star quarterback C.J. Stroud during the Early Signing Period, Miller continued to be firm in his commitment.

“I just believe in my ability and I feel like it’s always been God’s plan for me,” Miller said. “It’s where I’m supposed to be. If something happened, if something was really speaking to me, telling me I shouldn’t have gone there, I wouldn’t have gone there. But I feel like it’s the place for me. I feel comfortable with Coach Day and what I can do on the field. I’m doing whatever is best for the team and as of right now they need more quarterbacks right now. (Ohio State) only has two on scholarship right now.”

Miller understands the reasoning behind Stroud wanting to be a Buckeyes player. What quarterback wouldn’t want to play under Day? Since his arrival to Ohio State in 2017, Day has displayed his talent through the Buckeyes’ quarterbacks. In his first year, Day helped incumbent starter J.T. Barrett improve his passing yards per game, passing yards per attempt and touchdowns thrown.

The following year after Barrett’s graduation, Day helped one-year starter Dwayne Haskins set the school record for passing yards in a single game and single season. Haskins later was selected in the first round of the 2019 NFL Draft by the Washington Redskins.

This season Day has had former five-star recruit and Georgia transfer Justin Fields lead the nation’s top scoring offense. Fields, who finished third in this season’s Heisman Trophy voting, had quite the recommendation for any quarterback thinking about going to Ohio State.

“It’s no surprise that Coach Day has had a lot of success coaching quarterbacks,” he said “It’s simple if you want to be a successful quarterback there’s really no other place to go than Ohio State.”

It was only a year ago Fields was in a similar spot as Miller. He was searching for the best spot for a school to use his talent. Miller has watched the the success Fields and others have had that don the scarlet and gray combination.

“For a guy like Justin being able to say something like that about Coach Day, it just shows the reputation he has as a coach,” Miller said. “(Going to the NFL) plays a big role. What they were able to do with Dwyane Haskins last year and really all their players, how they prepare them for the next level. Not even just the NFL but for life after football.”

Once Fields plays in the Fiesta Bowl, he’ll be the third Ohio State quarterback to play in the College Football Playoff since the creation of the format in 2015. The next may very well be Arizona’s own Jack Miller.