Regulations to steadily increase the energy efficiency of lightbulbs got their start under President George W. Bush, but the Trump administtration this year reversed new, tighter rules that were supposed to take effect in January. (Photo by erika dot net/Creative Commons)

WASHINGTON – A Trump administration plan to roll back stricter regulations on energy-efficient lightbulbs may have done the impossible – put environmentalists and some utility companies on the same side of an issue.

The new, tougher rules were set to take effect Jan. 1, adding flame-tip, reflector and other bulbs to the list of incandescents that must meet tougher energy use standards, and setting higher standards generally for multiple forms of incandescent lights.

But the Energy Department said in October that it would not impose the new rules, framing the decision as one of choice for consumers who were already moving in the direction of energy-efficient bulbs on their own. The department doubled down Friday, with a notice in the Federal Register that it has determined tougher restrictions on general service incandescent lamps “would not be economically justified.”

That doesn’t make sense to Cottonwood retiree Paulette English, an early adopter of low-energy compact fluorescent lightbulbs who soon shifted over to LEDs when they started to become commercially available.

“It’s 100-year-old technology,” English said of incandescent lights. “It doesn’t make any sense to continue with it when there are options that are so much more efficient and cost-effective and non-damaging to the Earth.”

Dozens of power companies, including Arizona Public Service and Tucson Electric Power, appear to agree. They wrote to the Energy Department urging it to withdraw the proposal that the utilities say could add hundreds to consumers’ electric bills. 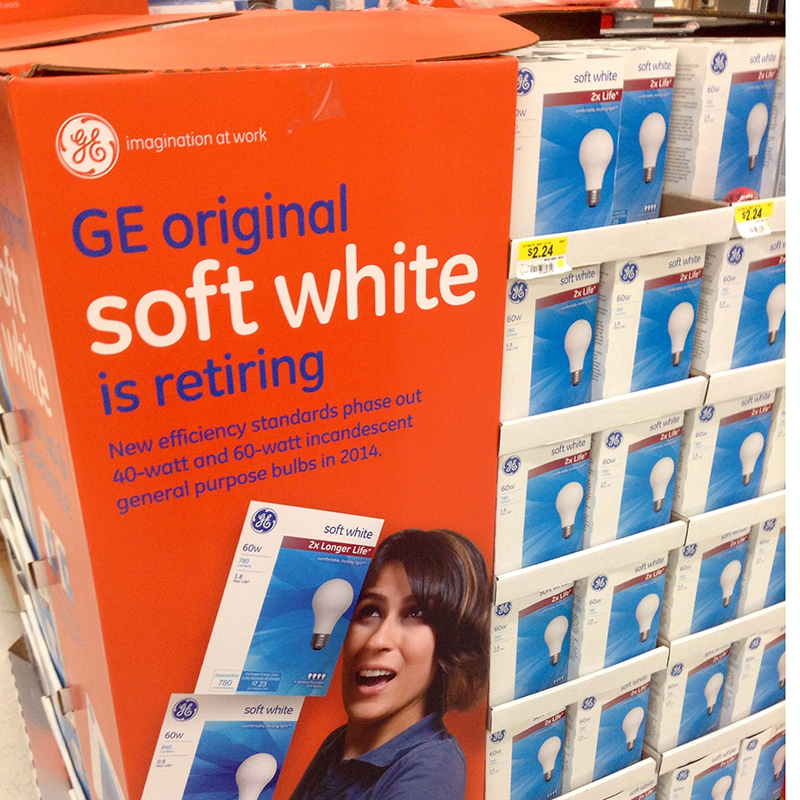 A 2013 display alerts Walmart shoppers to the 2014 phaseout of 40- and 60-watt incandenscent bulbs in favor of more energy-efficient lights, am expanding regulation the Trump administration reversed this year. (Photo by Mike Mozart/Creative Commons)

But when he signed the rollback in October, President Donald Trump criticized the rules for forcing consumers to buy a “much more expensive bulb that doesn’t have a good-looking light.”

“We’re bringing the incandescent bulb back for those that want it,” he said. “We’re going to have both alternatives. We like to have alternatives.”

He reiterated that argument during a Dec. 18 rally in Battle Creek, Michigan, when he said the move may seem like a “a little, but it’s big stuff.”

That was also the argument the Energy Department used when it posted notice of the rollback, saying demand for LEDs is increasing and that “consumers who already benefit from the wide availability of LEDs will continue to do so.” The proposal drew more than 63,000 public comments.

The regulations in question were approved in 2017 and were the latest update in a move toward energy-efficient bulb standards that began in 2007. That Bush-era law began tightening restrictions on incandescent bulbs and required agencies to regularly re-evaluate standards or prohibit the sale of bulbs that don’t meet a standard of 45 lumens of light output per watt.

The latest proposal would have added flame-shaped, globe, halogen, high-lumen, vibration service and shatter-resistant bulbs to the list of light bulbs that have to put out a minimum 45 lumens per watt.

The Environmental Protection Agency website says widespread use of LEDs could save 44 large electric power plants’ worth of energy, or up to $30 billion in electricity costs, by 2027. LEDs can last up to 25 times longer than regular incandescent bulbs, which typically burn for 1,000 hours.

Advocates with the Natural Resources Defense Council – and over 24,000 of its members who signed the group’s petition to regulators – see the rollback as a step backwards in energy efficiency. Noah Horowitz, the NRDC’s energy efficiency program director, said the regulation would have moved people away from incandescent and halogen bulbs quicker. 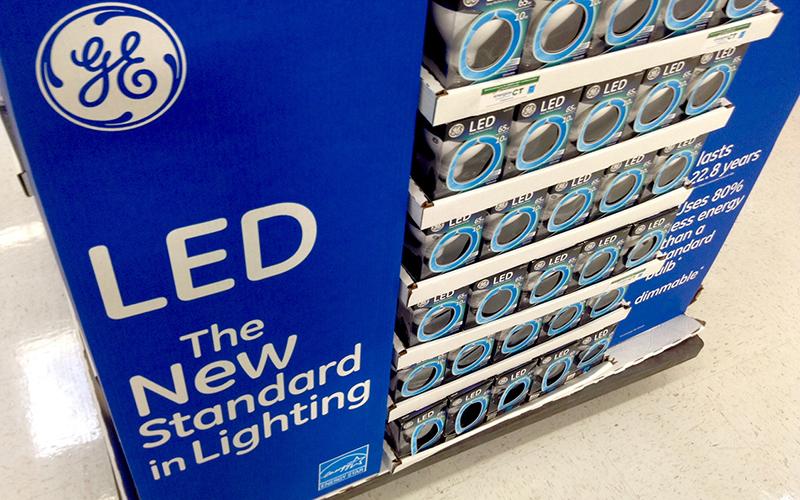 LED lighting is more efficient and longer-lasting than old incandescent lightbulbs, which it had started replacing as a result of federal efficient lighting standards. (Photo by Mike Mozart/Creative Commons)

“To many, LEDs are the superior product in terms of energy savings and pollution prevention, but there’s still enough people that, for whatever reason, keep buying the incandescent and halogen,” he said.

But Stephen Arvay, branch manager of City Electric Supply in Phoenix, said his customers are increasingly asking for energy-efficient lighting – without needing more stringent regulations to do so.

The Trump plan to roll back the tighter rules was challenged in court by 15 states, including California and New York. The NRDC has joined multiple environmental groups in a separate lawsuit. But courts have so far allowed the rollback to proceed.

“There are no advantages to doing that except to play to a very, very small, uninformed base who think that the government telling them anything is bad and who want to keep their lovely, soft-white incandescent bulbs,” he said.

English, a longtime follower of environmental causes, said she is “very frustrated” with the administration’s move.

“It’s like saying, ‘Let’s not build cars because horses will get us to where we want to go,'” English said.