Washington State Cougars quarterback Anthony Gordon has passed for 5,228 yards and will present a challenge for the Air Force defense in the Cheez-It Bowl. (Photo by Jeff Halstead/Icon Sportswire via Getty Images)

SCOTTSDALE – Saying that Washington State and Air Force differ in offensive styles would be an understatement.

At the Cheez-It Bowl on Saturday night inside Chase Field, each football program will try to move the ball down the field in vastly different fashions. Washington State (6-6) will utilize an air-raid passing attack while Air Force (10-2) will execute a triple-option running approach.

Washington State redshirt senior quarterback Anthony Gordon has passed 54 times per game this season while he has completed 72.1 percent of his pass attempts for 5,228 yards and 45 touchdowns, both Pac-12 records. Sophomore running back Max Borghi has also rushed for 808 yards on 6.5 yards per carry and 11 touchdowns.

In contrast, Air Force has thrown the ball only 114 times the entire season.

“You look at the production, and any time you have seven different (wide) receivers that have at least 500 yards worth of catches, trying to simulate that, you just can’t completely do it during your preparation and your practices,” Air Force coach Troy Calhoun said. “Not that we haven’t tried, because we have.

“A great, great offense. I think the other part that is so impressive, you look upfront and they have only relinquished (very few) sacks on the whole season.”

When asked about the unique bowl game, Calhoun said at media day that he couldn’t find a comparison to his offense at Air Force and the offense coach Mike Leach has at Washington State. 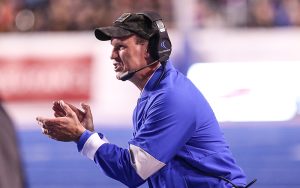 Not just this bowl season, but if you want to cross the full spectrum of bowls in the history of college football,” Calhoun said. “… I bet, if you research, there has maybe never been a larger (gap), perhaps ever in a bowl game.”

After a brief pause, Calhoun blurted that maybe the Houston Bowl in 2003 with Texas Tech and Navy could compare. Leach was the coach at Texas Tech in 2003, as well.

Despite the glaring differences in attack style, Leach argued that the offenses at Washington State and Air Force are actually similar in scheme, saying that both attack the entire field and put the ball in every skill player’s hands.

With that, Leach said this match-up certainly will have excitement and each offense will be a challenge to stop. He understands that slowing a triple-option attack is never an easy task for any team.

“They do a good job of executing and, then, as a result, you have to do a good job at executing your defense,” Leach said. “It is very key that everyone does their jobs and is well synchronized. I think that is the challenge that a triple-option presents because they are typically well synchronized and you have to do the same on defense and cover all the space and the personnel.”

Air Force senior inside linebacker Kyle Johnson knows that stopping an air-raid passing attack won’t be simple, as well, especially against a quarterback as talented as Gordon, so he realizes that the defense will have to bring pressure and “cause some chaos.”

“We have played some very talented offenses this year,” Air Force senior free safety Jeremy Fejedelem said. ” Hawaii I would say is probably the closest type of offense to what we are playing, but you can’t really even compare them to Washington State. Boise State always has pretty high-powered offenses, so we have played our fair share of talents, but this is kind of its own beast.

“We are excited for the test.”

Air Force has a senior class that has a chance to leave a lasting legacy with the program to win and end with 11 wins, the most since Calhoun became coach in 2007.

After back-to-back 5-7 seasons, Johnson added that the senior class wants to leave that legacy to show what can be accomplished.

“It would mean a lot because it has been a great journey,” Fejedelem said. “It feels like yesterday that I came in and went through basic training, but at the same time, every day feels so slow and the years go so fast. It is hard to explain, but it will be unique. I haven’t really thought about it. Probably after the game, I will shed a few tears, regardless of win or lose, but it has been a great journey.”

Despite an up-and-down season, Washington State would have won back-to-back bowl games for the first time in program history. Leach said he definitely thinks that motivates the team.

“This season wasn’t really the model season after going 11-2, but I think it goes to show that when adversity strikes that you have to pull together,” Gordon said. “We had some bad examples and some good examples of it, and it was a growing season.”

Gordon transferred to Washington State after a season at City College of San Francisco in 2015. Then, he sat behind future NFL quarterbacks Luke Falk and Gardner Minshew until this season, his final collegiate football season.

It would be special to end with a Cheez-It Bowl win against Air Force, but it will also just be special for Gordon to play his final game in an MLB stadium.

“I think it is pretty ironic that I will end my football career on a baseball field with the fact that I was basically a baseball player my whole life,” Gordon said.