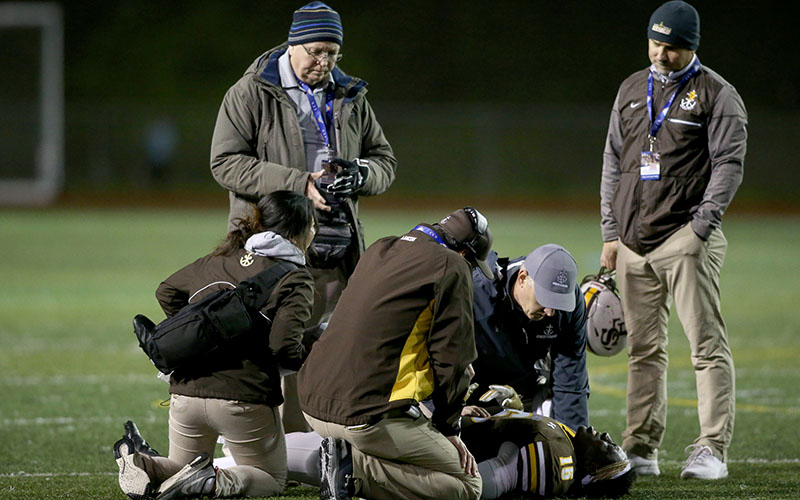 Injuries are common in high school football, like this one at a California playoff game, but more than half of secondary schools don’t employ a full-time athletic trainer. (Photo by Anda Chu/Digital First Media/The Mercury News via Getty Images)

PHOENIX – Injuries in young athletes are common occurrences. What is not common is the level of treatment and rehabilitation received when those injuries happen.

Cathy Corlett, a goalkeeper at Campo Verde High School in Gilbert, has experienced her fair share of injuries, including four concussions that occurred while playing soccer.

“One time I was diving out to get a cross, and instead of hitting the ball, the girl kicked me in the head,” the senior said. “It feels like you are not yourself. You cannot act the same way you normally would, slow and not with it.”

Because the season is almost three months long, “having (trainers) there on a daily basis to keep us healthy and ready to play is awesome,” Corlett said.

Other schools have learned the hard way. After Ben Hamm, a junior at Wesleyan Christian School in Bartlesville, Oklahoma, collapsed and later died in 2015 following what appeared to be a routine tackle, district superintendent Rocky Clark vowed at Hamm’s funeral that he would “put in measures to ensure that something like this does not happen again.”

He immediately hired an athletic trainer for the school.

Matt Blackburn, the head athletic trainer at Campo Verde High School in Gilbert, believes that aside from a lack of funding, some schools don’t hire full-time athletic trainers because they fail to understand the value of the profession. 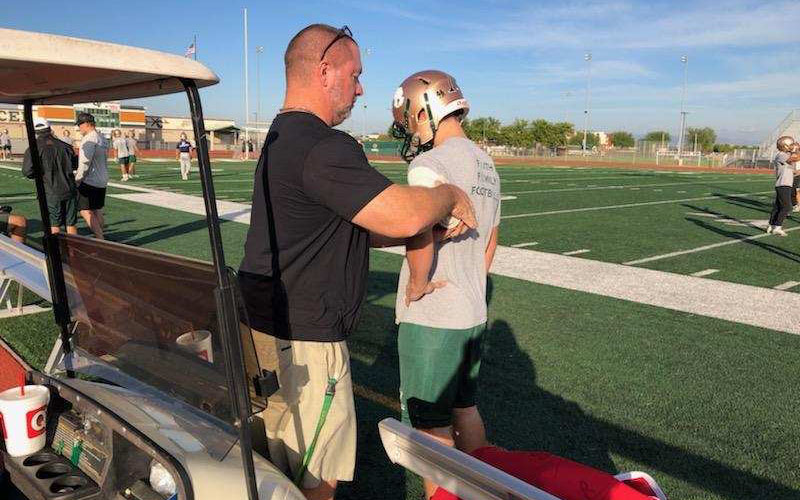 “We are trained in all athlete injuries, of all sorts, from load management to concussions to open fractures. I mean, you name it,” said Blackburn, who has been there for 20 years and in the field for 26. “Other than surgical, we can pretty much take any injury from the beginning to the end and never need an orthopedic doctor.”

High schools with no athletic trainer on staff full time often attempt to cover the position with coaches, athletic directors or student-led staff.

The problem is that most athletic directors or coaches are not trained in what to do when an injury occurs.

And even when someone is properly trained, such as outreach clinical workers that some schools use, Blackburn said there can be a disconnect between the trainer and the athletes.

“If I am an outreach worker, I am not getting there until midday,” he said. “You don’t know how they did in weight training or how they are feeling the next morning. We have an advantage because I have 12-hour access to these kids, and I can do two or three treatments in a day while other schools may be only able to do one.”

That limits the connection that Corlett says is so valuable.

“We are able to form a relationship with them and not be afraid to talk to them and voice our concerns,” she said. “Everybody knows who he is. It is comforting to know that he can help us in any situation.”

The importance of athletic trainers goes beyond hands-on treatment. The education certified trainers provide students can help them deal with injuries on their own time and teach them methods to prevent further injury.

“Everybody can relate to a pulled hamstring or muscle, but we can provide the education of what is happening to their body and how to fix it,” Blackburn said. “Knowing what I know, I can teach these guys the proper uses of ice, heating, massage … stretching is just as paramount as everything we provide because most young athletes don’t know it.”

If there is anyone who knows how imperative having an athletic trainer is to a young athlete’s development, it’s Blackburn. During his time in the profession and as an athlete in high school he has seen the methods of athletic training change.

“When I was in high school there was no athletic trainer. We went off old-school, rub-dirt-on-it and rest, and it affected my ability,” he said. “Rest is good, but there are a lot of other methods you can do than just that.”

The state of Arizona ranks among the best in the country in employing full-time athletic trainers for students.

The majority of public secondary schools in the state are educated on the importance of the athletic training profession and their expertise.

The Arizona Athletic Trainers’ Association and its president, David Mesman, along with the national organization tasks themselves with keeping the standards high for their athletic trainers.

In 2015, the organization unanimously voted to enact a rule that requires beginning in 2022 that any future athletic trainer must obtain a master’s degree in a related field and pass an Athletic Trainer Certification exam.

Mesman said the change in the degree requirement ensures that every trainer has extensive knowledge of every aspect they might encounter on the job.

“For athletic trainers in the profession, it’s actually the same degree program, just more rigorous at the master’s level,” he said. “It is not changing any of the scopes of practice or any of the educational competencies.”

Roughly 70% of the athletic trainers currently employed in the state hold a master’s degree in education or related sports medicine field, Mesman said.

Hiring full-time athletic trainers is at the discretion of the districts or schools that will be employing them.

David Hines, Executive Director of the Arizona Interscholastic Association said they certainly encourage schools to do so.

“I think the athletic trainer is your first hire to tell you the truth,” he said. They are the ones that are overseeing all of your athletic programs and having them on your campus is invaluable.”

The AIA does mandate that Emergency Action Plans be put in place for every sporting event, visible to everyone and that cover every possible scenario.

“If someone goes down, could have a sudden cardiac issue, could be a heat-related issue or a concussion where they get knocked out,” he said. “All those types of situations we like to have in place where we have somebody to do each step in the process.”

Hines said he hopes these plans would be practiced so everyone knows their roles, especially coaches.

“If you’re the coach and the idea is you will take care of it and then you go down, that is a big part of the plan,” he said.

Another important area of expertise that athletic trainers have extensive knowledge of is concussions.

The AIA and Dr. Javier Cardenas, a neurologist at Banner Health, created the Barrow Brainbook program.

It was implemented by Cardenas and the AIA to educate students on the signs and symptoms of severe brain injuries like a concussion.

Cardenas, who is also the chairman of the AIA sports advisory committee, said this program is a vital educational tool that each student must complete before being allowed to compete in any athletic event in Arizona.

“We felt at the time it was incredibly important that not just parents and coaches be educated about concussions but the athlete as well,” he said. “So the student is able to empower themselves with knowledge about concussion signs and symptoms so they can self identify, self-report, as well as report their fellow athletes.”

Cardenas said that many athletic trainers have significant knowledge of concussions and their symptoms and treatments.

It’s one of their many skills, skills that could have a long-term impact on an athlete’s health.