An Army Corps of Engineers unit installs a section of border barrier near Yuma in this file photo from September. The fiscal 2020 budget includes $1.375 billion for border wall construction – well below the $5 billion sought by President Donald Trump, but more than the zero House Democrats had pushed for. (Photo by Vincent Mouzon/Army Corp of Engineers)

WASHINGTON – The $1.4 trillion budget that Congress passed last week contained $1.375 billion for border wall construction in fiscal 2020 – what one expert called a “mixed bag” in which neither side got all it wanted.

The funding, rolled into a must-pass Defense spending bill before lawmakers left town for their holiday recess, was more than some Democrats wanted and less than the administration had asked for. The budget also includes funding to hire more immigration judges and restrictions on where the wall can be built, but no restrictions on the president’s use of Pentagon funds for construction.

“Republicans are going to clamor for more. Democrats are going to deny the total of their requests,” said Ruben Reyes, an immigration attorney in Phoenix.

“The American public will be the real losers in this,” Reyes said. “More than anything, individuals who are hoping for some kind of sensible comprehensive humane immigration reform are the ones who are most left out of the conversation.”

President Donald Trump’s fiscal 2020 budget request had included $5 billion for border wall construction, but the Democrat-controlled House included zero wall funding in the version of the budget it passed this summer. The compromise bill passed by the House and Senate last week, however, included $1.375 billion – roughly the same amount approved by Congress earlier this year over Trump’s objections.

At that time, the president diverted Defense Department funds for border wall construction – a move lawmakers were unable to block going forward in the 2020 budget. But the use of Pentagon funds for a border wall has currently been halted by courts, and the 2020 budget makes clear that Congress will not “backfill” Defense funds already diverted to the wall.

Clarissa Martinez, deputy vice president of policy and advocacy for UnidosUS, listed other wins and losses in the final bill, which she called a mixed bag for advocates.

“We see that it provides funds for alternatives to detentions, which is important given the conditions that we see immigrants being detained in,” Martinez said.

She said other positives include that “it rejects the use of citizenship fees to fund” Immigration and Customs Enforcement, and new accountability requirements for ICE and Customs and Border Protection, “including the creation of an independent ombudsman for immigrant detention.”

While Rep. Raul Grijalva, D-Tucson, said in a prepared statement that, “Any funding for the president’s border wall obsession is too much,” wall advocates said any funding is better than none.

“Additional funding to secure our border, build a wall, and safeguard America is welcome news for Arizona,” Rep. Paul Gosar R-Prescott, said in a statement from his office.

Ira Mehlman, media director for the Federation for American Immigration Reform, said the fact that Congress included any money for a wall, even if it was less than the administration wanted, “is a victory for the president, a victory for homeland security.” He said it will make it harder to deny future funding.

“Once you have gone down that road, it is hard to justify not funding more of it in the future,” Mehlman said.

Acting CBP Director Mark Morgan said last week that, with the money in the fiscal 2020 budget, he is “absolutely confident” that the administration will meet its goals for border wall progress.

Martinez said she was concerned by what she sees as a lack of restrictions on how the funds can be used, given the “scope of what this funding does. There aren’t enough guard rails on the use of funds.” 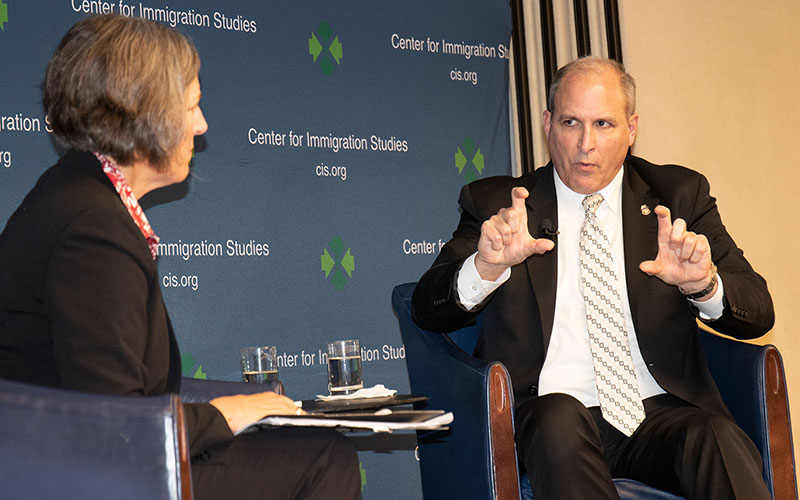 Acting Customs and Border Protection Director Mark Morgan told Jessica Vaughan of the Center for Immigration Studies that $1.375 billion Congress appropriated for the border wall in fiscal 2020, while far less than the $5 billion requested, would be enough to keep the project on track. (Photo by Kara Harris/Cronkite News)

For Heidi Altman, director of policy, National Immigrant Justice Center, the final budget represents lawmakers on both sides of the issue “walking away from immigrant communities.”

“We were looking for a bill that put some teeth on accountability mechanisms, so that Congress could finally take back its constitutionally granted power of the purse,” she said, adding that she’s seen this administration “really chip away” at that when it comes to immigration.

But Alex Nowrasteh, director of immigration studies at the Cato Institute’s Center for Global Liberty and Prosperity, noted that Trump has not come close to fulfilling his campaign promise of a “big, beautiful wall” that Mexico would pay for – an issue both sides are likely to focus on in the 2020 elections.

“Trump will use his failure during the first term to argue that he should have four more years to finish,” Nowrasteh said. “Democrats will use it as evidence of their effectiveness in blocking Trump’s policy.”

Reyes agreed that a border wall is at least “going to be a talking point” next year. But he fears the larger issues will be overlooked.

“I think the greater immigration debate lies more on the socio, political, economical situation of Central America, South America,” he said, “and the current instability in the region that is kind of creating the impetus for people to risk everything that they have to seek safety here in the United States.”