Trucks wait to enter the U.S. from Mexico at the Otay Mesa, Calif., Port of Entry. Trade with Mexico is worth billions every year to border states, which have high hopes for a deal to replace the 25-year-old North American Free Trade Agreement. (Photo by Glenn Fawcett/U.S. Customs and Border Protection)

WASHINGTON – Just hours after a bitterly partisan impeachment vote, the House turned around Thursday and gave overwhelming bipartisan approval to a new U.S.-Mexico-Canada trade agreement that could affect billions of dollars in annual trade for Arizona.

The 385-41 vote is just one step in the approval process for the USMCA deal, but it was hailed by business and labor groups as an important step toward replacing the 25-year-old North American Free Trade Agreement.

“The United States-Mexico-Canada Agreement is crucial to further grow employment opportunities as increasing cross-border commerce and trade that will directly impact our economies for the better,” her statement said.

While lawmakers on both ends of the political spectrum quibbled with parts of the final deal, all nine House members from Arizona voted for the 239-page measure.

“Southern Arizona’s economy depends on robust trade with Mexico, and while this agreement is not perfect, it’s a strong baseline for future trade deals that can help working people,” Rep. Raul Grijalva, D-Tucson, said in a statement.

Arizona businesses exported $9.8 billion in goods and services to Canada and Mexico in 2018, according to the Office of the U.S. Trade Representative, with $7.6 billion going to Mexico and $2.2 billion to Canada.

The state also imported $10.6 billion that year from its North American trading partners, with $9 billion coming from Mexico and more than $1.5 billion from Canada, according to data from the University of Arizona’s Eller School of Management. 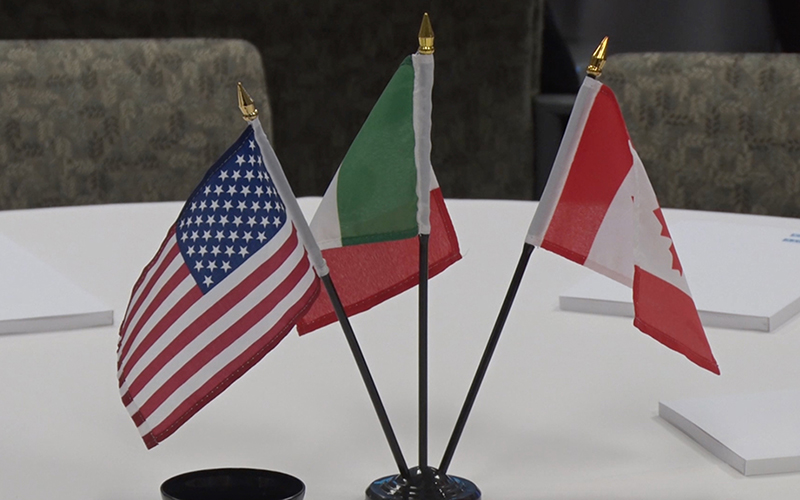 The Mexican Senate and U.S. House have taken up the USMCA deal, the U.S. Senate and Canadian Parliament have not. (Photo by Trevor Fay/Cronkite News)

Replacing NAFTA was a campaign promise of President Donald Trump, who claimed the deal was unfair to U.S. businesses and farmers and badly in need of an update. Negotiations between the three countries began shortly after Trump took office, in 2017, and a preliminary deal was signed last year.

Democrats balked at the deal, which led to months of negotiations. The bill approved Thursday includes stricter monitoring of environmental and labor standards, as well as language that Democrats said could lower U.S. prescription drug costs – changes that were significant enough to win the endorsement of the AFL-CIO.

The deal also includes new sections on digital trade and protections on intellectual property, as well as a guaranteed minimum wage for autoworkers in Mexico.

Simon Lester, associate director of the Cato Institute’s Herbert A. Stiefel Center for Trade and Policy Studies, said the new deal “preserves the core of NAFTA, with zero tariffs on virtually all trade in goods between the three countries.

But Glenn Hamer, the president and CEO of the Arizona Chamber of Commerce, said the agreement is needed for a state like Arizona.

“Today’s vote was historic, not only for the country, but for Arizona,” he said in a statement Thursday. “No state is as well positioned as Arizona for economic expansion under USMCA.”

Rep. Greg Stanton, D-Phoenix, agreed that the deal is particularly important for a border state.

“I can tell you that growing trade relationships with Mexico and Canada is essential to Arizona – and this new agreement will offer a big lift to our local companies,” Stanton said in a statement from his office.

“From multinational companies to mid-sized and small businesses, from tech workers to farm workers, there’s no doubt that the new USMCA is a win for all Arizonans,” he said.

The deal must still be approved by the Senate, which will not take it up until January at the earliest, after it returns from its holiday recess. Mexico’s Senate approved the agreement last week, while the Canadian Parliament has yet to act.

While he hopes the deal goes through, Grijalva said it is only a first step, saying lawmakers “must continue fighting to ensure strong environmental protections in future trade deals.”

Rep. Andy Biggs, R-Gilbert, agreed that the bill “is not perfect,” but added that “no trade agreement of this size or scope ever could be.” But he said the measure could help “create hundreds of thousands of new American jobs and add billions of dollars to the U.S. economy.”

“Our farmers will be able to sell to new markets, our exporters will deal with fewer paperwork headaches at the border, and our growing e-commerce sector will gain greater certainty that its intellectual property is being protected,” he said in a prepared statement.