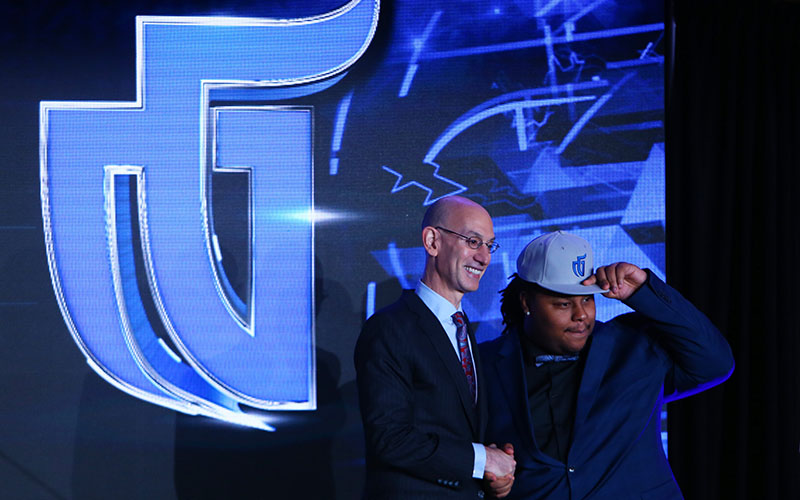 Just like in the real NBA draft, Artreyo Boyd poses for a photo with NBA Commissioner Adam Silver after being drafted No. 1 overall in the first round by Mavs Gaming during the NBA 2K League Draft at Madison Square Garden. Many hope the Phoenix Suns will add a team. (Photo by Mike Stobe/Getty Images)

PHOENIX – Like many sports fans, Antonio Saldivar has imagined what it would be like to represent the local NBA franchise.

“I would love to play for Phoenix,” he said. “That’s like every kid’s dream growing up … to play for their hometown team.”

Their NBA 2K League team that is.

The league, a professional esports venture featuring the top NBA 2K players in the world, is the first one operated by a U.S. professional sports league. Twenty-three of the NBA’s 30 franchises sport a team. The Suns are not one of them.

Many, including Suns star Devin Booker, would like to see that change.

“That would be dope,” Booker said. “I’ve been paying attention. Getting a team in the city would be real nice.”

The league is serious business. Participants are the world’s top gamers who are drafted following a three-week combine. The season lasts more than four months and all games are streamed on Twitch.

Players sign a six-month contract, with first-rounders earning $35,000, according to a story by HoopsHype. They also qualify for health insurance and retirement benefits and receive housing and relocation payments since the six-player teams live together in the city for which they play. 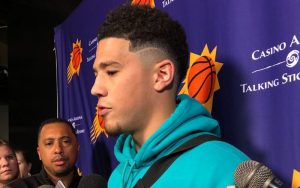 So far, the Suns will be one of the NBA’s seven outsiders. Carlos Manzanillo, the director of business communications for the team, said the Suns have no immediate plans to change that despite some interest from local NBA 2K talent and even the team’s own players.

Phoenix native Saldivar, better known as “UniversalPhenom,” plays for the Memphis Grizzlies’ NBA 2K League franchise, Grizz Gaming, as their starting small forward. Although he is currently under contract, he said he likes the idea of coming back home to play for the Suns if he had the opportunity and believes that if the Suns took a chance with creating a franchise, it would pay off.

“If you are a Phoenix native you are a fan no matter what,” Saldivar said. “You love the Coyotes, you love the Cardinals, you love the Suns. Giving fans a new team to root for is good. Everyone plays video games now, too, which gives fans something to relate to.”

Phoenix isn’t known as a hotbed for esports, let alone NBA 2K, despite Saldivar going pro. However, he said he has seen interest in esports grow through the community outreach he has done with Grizz Gaming, in Memphis.

“We went to an eighth grade graduation and had a booth there telling kids about esports,” Saldivar said. “Older people can’t wrap their head around how you can make a living off of video games when you absolutely can and high schools have classes now scholarships for them in college, too.”

Saldivar went to high school at Sandra Day O’Connor and said that going to schools would be a good example of outreach the Suns could do to promote esports and grow a fanbase. Saldivar said he would love to go back there and talk to students about esports.

“That would be crazy awesome,” Saldivar said. “I would do that in a heartbeat. Talking to those kids about esports, it can give these kids a different outlook.”

Even NBA players play a lot of video games, including two of the Suns’ brightest stars, Booker and Deandre Ayton. Saldivar said he has played against Ayton in NBA 2K.

Booker has had a strong relationship with professional esports organization, 100 Thieves. The NBA star has been seen wearing official 100 Thieves merchandise and has live-streamed with co-owner of 100 Thieves, Matthew “Nadeshot” Haag. Booker has said he is a big Call of Duty guy but on the topic of the Suns and a potential NBA 2K franchise, he said he would be all for it.

Support for the NBA 2K league is growing each year, with a combined two million followers on social media and NBA 2K League content reaching upwards of 300 million views on social media.

Now the ball is in the Sun’s virtual court when it comes to esports.