The House is expected to vote this week on two articles of impeachment against President Donald Trump – the first impeachment vote in 21 years. Arizona is one of several states with no current members in the House or Senate who were around then for the impeachment of President Bill Clinton. (Photo by Susan Melkisethian/Creative Commons)

WASHINGTON – With an impeachment vote looming, members of Arizona’s congressional delegation faced town hall meetings with constituents torn on the issue and office correspondence that included the occasional death threat.

That was not this week’s expected House vote on articles of impeachment against President Donald Trump, but the vote 21 years ago on the impeachment of President Bill Clinton.

“It was very polarized,” said former Rep. Matt Salmon, a Mesa Republican, of the town halls he hosted during the Clinton impeachment inquiry in 1998.

“There were people that were very supportive of what we’re doing and thought we should be doing it and people that thought it was a complete waste of time and counterproductive and hurts the nation,” he said.

That could be a description of feelings on the impeachment inquiry into Trump.

But members of Arizona’s current delegation are facing the question of impeachment for the first time. No current member was in Congress in 1998.

If there’s a difference between now and then, former Rep. Jim Kolbe believes that lawmakers now face a public even more divided than before.

“There was less polarization than what you see today, which is just a complete polarized view of this impeachment or this process … towards impeachment of President Trump,” said Kolbe, a Tucson Republican. “It’s a different feeling on Capitol Hill, different attitude, different environment.”

Kolbe attributes the change to several things including redistricting that makes districts more red or blue than before, the amount of money spent in political campaigns and, most of all, the rise of social media.

“What it tends to do is people tend to follow only the information they want to know, they see and want to hear,” he said.

Impeachment polls appear to back the fact that the inquiry into Trump’s behavior has changed few minds among voters. Rep. Debbie Lesko, R-Peoria, said she is hearing that from constituents.

“People that support Trump, when they see me saying that this impeachment is a sham process they love it and so they call in or they put comments on social media or whatever and say they love it,” Lesko said. “People that don’t love President Trump say that I’m a terrible person basically.”

Salmon said he doesn’t remember a lot of details from the impeachment inquiry 21 years ago, but remembers one day when he took a constituent call instead of staff.

“I remember getting one woman on the phone that I actually talked to … and she said, ‘I hope you and your family die in a horrible crash,'” Salmon said.

He said the number of letters and calls his office received during the inquiry “was insurmountable.”

“There was no way to really keep up with it. It was probably at least 10 times the volume of what it normally was,” Salmon said.

While some Democrats have long called for Trump to be impeached, the inquiry began almost three months ago when House Speaker Nancy Pelosi called Trump’s discussions with Ukrainian officials a “betrayal of his oath of office, betrayal of national security and betrayal of the integrity of our elections.” 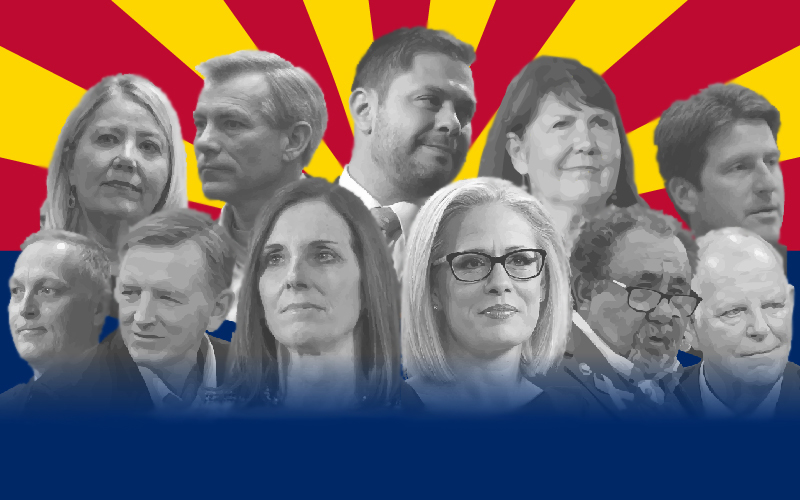 Where do Arizona lawmakers stand on impeachment?

Her comments followed a whistleblower’s report about a July 25 call between Trump and Ukrainian President Volodymyr Zelensky, in which Trump asked Zelensky to “do us a favor” and investigate the son of former Vice President Joe Biden, a possible 2020 presidential challenger.

That inquiry began with several weeks of closed-door hearings by the Intelligence, Foreign Affairs and Oversight committees, followed by another two weeks of public hearings before the Intelligence Committee. The House Judiciary Committee held its own hearings then voted Friday to approve two articles of impeachment – abuse of power and obstruction of Congress – on a straight party-line vote before sending them to the full House, where a vote is expected Wednesday.

Kolbe urged the current delegation to follow advice he was given during Clinton’s impeachment.

“My advice to them would be … not to telegraph your position in advance,” Kolbe said. “You need to hear all the evidence, you need to see what comes out, what the charges are and then you need to read the testimony.”

Kolbe remembers going through volumes of evidence before making a decision on whether Clinton should be impeached,

“I remember going through, I think it was three volumes, going through page by page by page over weekends and at night before we have the debate on the floor on the House for the impeachment,” Kolbe said. “I think you have the responsibility as a legislator to make a responsible decision based on the evidence being presented to you.”

Salmon followed the same advice, reading through volumes of material before making a decision.

Ultimately, the House passed two of four articles of impeachment against Clinton, with Salmon voting for all four and Kolbe voting for three of them. But the Senate later voted against removing Clinton from office – a scenario expected to repeat itself now, with the Democrat-controlled House expected to impeach and the GOP-controlled Senate expected to reject any claims.

The decision to impeach a sitting president was not an easy decision to make, Kolbe said, and it was harder for him because he had worked with Clinton on several issues, including the North American Free Trade Agreement.

“It’s not easy in the sense that I had met and worked with President Clinton … he’s a very likeable person,” Kolbe said. “But I was convinced that the evidence was pretty clear that he had not testified truthfully in the grand jury and so for that reason I voted for impeachment.”

Kolbe said “there was a lot of tension in the air,” and a lot of discomfort, in part because the charges against Clinton stemmed from a sexual act with an intern.

“You were dealing with some very personal kind of affairs,” Kolbe said. “No one felt comfortable about it.”

Pelosi has repeatedly urged Democrats to return to their districts and explain to constituents why they’re proceeding with an impeachment inquiry.

Former Arizona Sen. Jon Kyl said having the public on your side is the most important part of an impeachment inquiry.

“Without a fairly high degree of public support, it’s not going to have the momentum to get a conviction in the Senate, and the process will always be tainted in the public’s mind, and that’s not good,” Kyl told the Arizona Republic.