Even though quarterback Kyler Murray has struggled, Arizona Cardinals coach Kliff Kingsbury is optimistic about his future. (Photo by Norm Hall/Getty Images)

TEMPE – The progression of rookie quarterback Kyler Murray may be the primary measuring stick for this Arizona Cardinals season. Along with the obvious correlation between Murray’s success and the team’s overall play, the quarterback’s performance acts as a direct reflection on the job performance of first-year coach Kliff Kingsbury.

As the team closed the book on a disappointing 23-17 loss to the visiting Pittsburgh Steelers at State Farm Stadium on Sunday, punctuated by Murray’s career-high three interceptions, both coach and quarterback acknowledged the work necessary to clean up what has been their sloppiest showing to date. 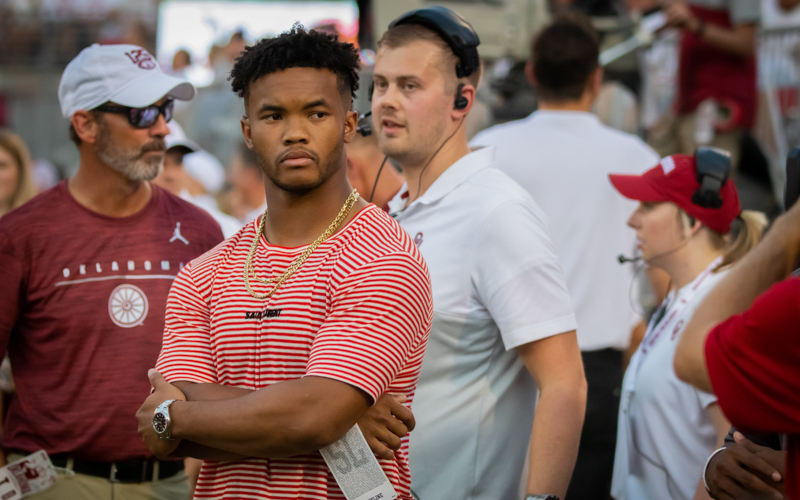 “Against a good defense like that, you get exposed even more when you do have those lapses that we had a lot of unfortunately on Sunday,” Kingsbury said Monday at his weekly press conference.

When asked if those same lapses limited his ability to call plays, Kingsbury was blunt in his assessment, providing honest feedback while seemingly speaking about his rookie quarterback without mentioning him by name.

“I would say so. Teams know you get pretty one-dimensional at that point,” Kingsbury said. “Then you have to really be precise in your decision making and accuracy with the football.”

Murray shared the same frustrations Sunday, voicing a similarly succinct review of the loss and his play.

“A game we should’ve won,” he told reporters after the game. “If I don’t throw two interceptions, we probably win that game.”

Murray’s three interceptions, all of which came in the second half, severely hampered Arizona’s ability to organize a comeback despite trailing by only three at halftime. The rookie often looked skittish in the pocket, succumbing to five sacks for 29 lost yards. Kingsbury noticed a shift in decisiveness for Murray, whom he hopes can regain a playing style similar to that of weeks five through nine where the rookie didn’t throw a single interception.

“I think he’s been a little more hesitant in his decision making,” Kingsbury said. “There for a while he was in a good rhythm, and he was either going, or he’s throwing it away, or he was getting it out of his hand. I don’t see as quick decision making.”

Kingsbury also critiqued his own performance, acknowledging the changes he needs to make as the team’s primary play-caller. Although the coach, 40, has bristled in the past at the idea that he is underqualified or in over his head, touting his experience of calling plays at the collegiate level, he made a point of recognizing the importance of getting his quarterback in the most ideal position possible.

“I’ve got to do a better job play-calling and making him more comfortable (where) he just makes a decision and plays,” Kingsbury said. “When he’s in that rhythm, he does a good job of avoiding those negative plays.”

As the team looks to collect its first win in almost two months Sunday against the Cleveland Browns in the last home game of the season, both Kingsbury and Murray see positives in the overall direction of the franchise. As the duo works to snap the team’s six-game losing streak, Murray was preaching the patience someone in his position must possess.

“I always feel good about where we’re going,” Murray said Sunday. “It obviously sucks right now, and I feel like we should’ve won today, but it is what it is, and you’ve just got to move forward.”